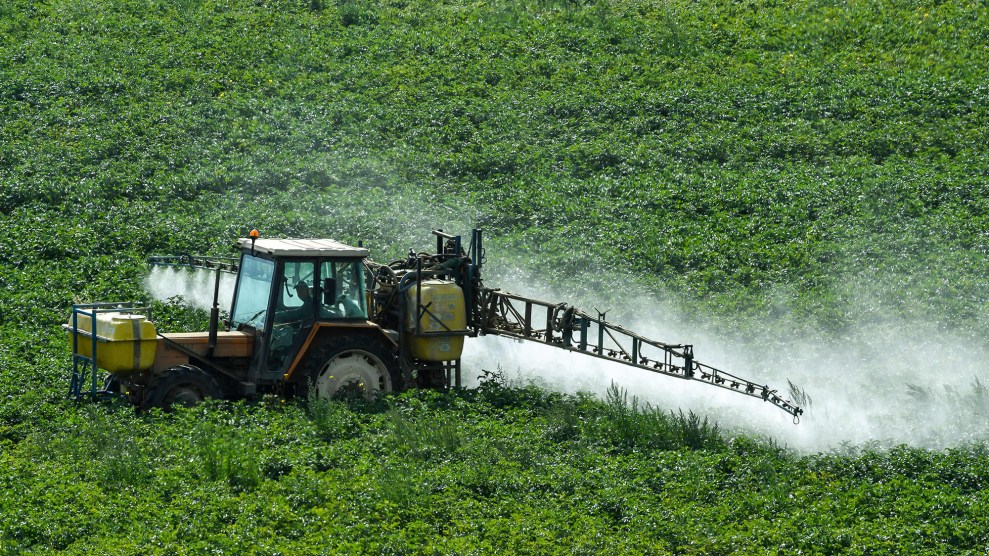 Arkansas regulators voted last Wednesday to relax restrictions on the controversial weedkiller dicamba, despite testimony from top scientists and scores of concerned citizens who urged them to reject the move in a public hearing.

As reported last year by FERN and Reveal, dicamba has damaged millions of dollars worth of crops over the past two years, after the EPA dismissed scientists’ concerns and approved the weedkiller for new uses on soybean and cotton seeds that Monsanto engineered to tolerate it. It has also harmed trees, gardens, and the wildflowers bees need to thrive and produce honey. Studies have shown that dicamba, which is sold by Monsanto and other companies, evaporates and “drifts” through the air long after it’s sprayed. These “volatility” problems cannot be fixed by restricting how and when to spray dicamba, according to the independent research.

Richard Coy, whose family recently closed its honey business, Crooked Creek Bee Co., told the Arkansas Plant Board that there’s no safe place to raise his bees anymore because dicamba kills their food. “Our bees no longer collect the pollen and nectar from the wildflowers that produce the wonderful flavor of honey that made Crooked Creek so special,” he said. “My family has made the decision to relocate our business to other states because it is not profitable to keep bees on a commercial scale in this state anymore.”

Coy was joined by organic and conventional farmers, farm-to-table restaurateurs, bird lovers, conservationists, gardeners, doctors, small-business owners, and sustainable farmers who urged the board to stick to its April 15 dicamba application cutoff, which was the strictest in the nation. The plant board had established the early cutoff for the 2018 growing season after receiving a record-breaking number of drift complaints about dicamba the year before.

“Please stand up for our small farmers, our children, and our community and local food system by joining us and saying no to extending the dicamba application deadline,” said Kim McCannon of Bell Urban Farm in Conway.

Yet after hours of similarly impassioned pleas, the plant board approved, nine to six, a May 25 cutoff date for dicamba spraying—five days later than the proposal submitted for public comment. The board also agreed to enforce a half-mile buffer around fields of soybean and cotton that aren’t engineered to tolerate dicamba, as well as a mile buffer around university and government research stations, commercially grown specialty crops, and certified organic crops.

Of more than 2,600 public comments submitted before the hearing, 2,248 opposed relaxing the cutoff, and 397 supported it.

Monsanto lobbied the board to define organic crops as “USDA-certified,” but board member Terry Fuller objected to adding “certified” at all. “If we leave certified in there, organic farmers are out of business,” said Fuller, who voted against the extension. Organic farmers stand to lose their certification if they test positive for any amount of the herbicide, and have no way to rebuild an organic, pesticide-free farm if they’re anywhere near commercial dicamba spraying, he said.

The board dismissed Fuller’s concerns, along with those of University of Arkansas weed scientist Jason Norsworthy, who described the research he’s done on dicamba to the board. That research—along with studies by several colleagues in other states—established the volatility problems with the new dicamba formulations that have devastated crops over the past two years.

“I am appalled that industry would bring to us a technology that has caused so much damage,” said David Wildy, who grows conventional cotton, soybean, and other crops in northeastern Arkansas, ground zero for dicamba drift complaints. “I’ve seen no technical or scientific data presented in previous meetings, nor here today, that would support a decision to move the dicamba cutoff date to May 20.”

Dicamba producers Monsanto and BASF have responded to that evidence by attacking Norsworthy’s credibility, dismissing his findings as “theories” and “outliers.”

BASF again went after Norsworthy—named outstanding researcher by his peers last year—in an unsigned letter sent to the board the day before the hearing, 15 days after the public comment period ended. The letter closely tracked the testimony presented at the hearing by BASF marketing manager Chad Asmus, who also said that additional training for applicators has solved the drift problems and no further restrictions are necessary.

Norsworthy told the board he stood by his work, which lines up with research done by several of his colleagues. “There is now a body of evidence that continues to show that the new dicamba formulations continue to volatilize for at least four days after application at levels sufficient to injure soybeans,” he said. That evidence comes from trials conducted by university scientists in Nebraska, Indiana, Missouri, Arkansas, and Tennessee. “Dicamba movement is beyond the control of any applicator in this room,” Norsworthy said.

The scientist’s testimony was ignored. Soon after he spoke, board member Marty Eaton proposed pushing the cutoff out even further, to May 31. That motion was voted down, and the board ultimately settled on a May 25 cutoff.

Board member Russell Bragg, who voted against the extension, worried that the board might be missing warning signs of impending disaster, much like the captain of The Titanic, who was blamed for ignoring warnings of icebergs.

“What we’re hearing here,” Bragg told his fellow board members, “and what concerns me is, are we missing the warning signs as well?”