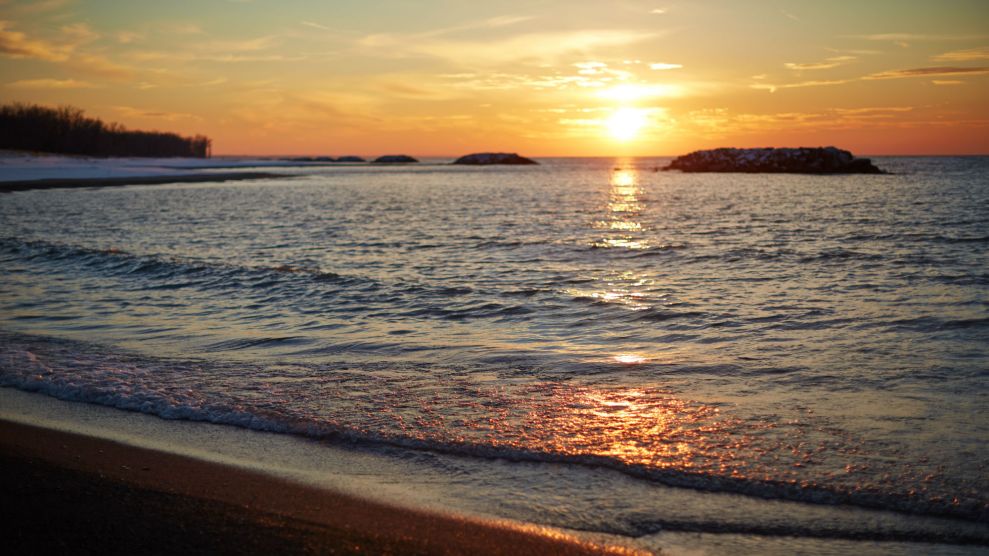 Toledo, Ohio, a city of nearly 300,000 situated on the western edge of Lake Erie, may not seem like a mecca of progressive environmental policy. But on Tuesday, the city’s denizens will vote on a radical ballot measure to recognize that a body of water has legal rights.

If passed, the so-called Lake Erie Bill of Rights, or LEBOR, would grant legal rights to the fourth-largest Great Lake and its watershed, as an amendment to the city’s charter. According to supporters, it would be the first US law of its kind.

“The people [in Toledo] understand that it’s up to them to protect the water,” says Tish O’Dell, the Ohio community organizer at Community Environmental Legal Defense Fund, a national nonprofit focused on advancing the rights of nature, which helped local activists draft LEBOR. “The government isn’t going to do this for them. And this gives them more standing [to take legal action].”

The measure, though, has sparked controversy in Toledo, pitting residents fed up with contaminated water against farmers who make up the backbone of the region’s economy. Supporters argue LEBOR is a necessary step in securing clean water for the city, whose primary water source is the lake, while opponents—from entities like the Ohio Farm Bureau and the Ohio Chamber of Commerce and associations representing the state’s dairy, pork, poultry, soybean, corn, and wheat industries—posit the measure is unenforceable and unconstitutional, not to mention damaging to their bottom lines.

No matter what happens, advocates hope the measure will create a model for communities across the country who feel current environmental laws aren’t doing enough to protect natural resources—and their health—and who are considering finally stepping up to do something about it.

Surrounded by both agricultural land and metropolitan areas like Buffalo, Toledo, and Cleveland, Lake Erie has long been a site of environmental concern. In the late 1960s, the lake became so polluted it was declared “dead” by the media, a reference to the number of rotting fish washed up on its shores. Its demise provided a wake-up call for the federal government, which went on to pass several environmental regulations, including the Clean Water Act of 1972.

Then, in 2014, roughly half a century after Lake Erie’s declaration of death and after substantial progress in cleaning up the lake, more than 100 people got sick because of a toxic algal bloom in the lake, which was caused by agricultural nutrient runoff. Toledo had no safe drinking water for nearly three days.

“I mean, it was just total panic,” says Markie Miller, an organizer at Toledoans for Safe Water, the grassroots group behind the ballot measure. “People didn’t know how to deal with it. There were lines of people at water stations. And, you know, it’s August. So it’s hot. And we’re standing in the sun waiting to get a bucket of water.”

“People were fighting over it,” she adds.

A few years later, a report from the Centers for Disease Control and Prevention found that Toledo’s 2014 incident was one of the first times a community reported an illness outbreak from algae toxins in municipal drinking water. And in the summer of 2017, Lake Erie’s algal blooms matched the third largest on record, and though no one reported a related illness that summer, it was still a cause for growing concern; researchers estimate that with a rise in global temperatures, algal blooms will only become more frequent.

“It was just total panic. It’s August and we’re standing in the sun waiting to get a bucket of water.”

Miller remembers feeling “voiceless” and “powerless” during those three days in 2014—like there was no real way to challenge the damage being done. The runoff was entirely legal, as farms hold permits to pollute the lake. And the state was doing little to protect the Lake Erie watershed from runoff pollution and cap the pollution levels.

Advocates like Miller spent the following few years trying to force action by contacting local and state officials before attending a 2015* talk by the Community Environmental Legal Defense Fund about recognizing nature’s rights as a legal strategy. “The residents, after two years of trying to work within the system, heard about rights of nature and they said, ‘Well, why can’t we do that? Why can’t we try that with Lake Erie?’” says O’Dell. “And so that’s how the Lake Erie Bill of Rights was born.”

By last summer, Toledoans for Safe Water had gathered 10,500 signatures—more than twice the required number for a vote in November. (About 6,400 signatures were validated by the election board.) But the plan was held up in late August, when the Lucas County Board of Elections blocked the measure from going on the ballot, citing concerns about the law’s enforceability. The group appealed the decision, and after a long legal battle, the Ohio Supreme Court ultimately allowed the initiative to appear on the ballot for a special citywide vote on February 26.

If passed, LEBOR would authorize individuals to bring lawsuits against activities that infringe upon Lake Erie’s potential right to “exist, flourish, and naturally evolve”—including pollution from farming activities. It would also put Toledo right in line with a growing global movement on the rights of nature. Ecuador and Bolivia already have national nature-rights laws on the books, and similar local laws have been established in Brazil. (Rights-of-nature laws only apply to entire ecosystems. A single tree or the bacteria on a toilet seat, for example, wouldn’t qualify—and it couldn’t be extended to apply to something like an embryo.)

“The residents, after two years of trying to work within the system, heard about rights of nature and they said, ‘Well, why can’t we do that? Why can’t we try that with Lake Erie?'”

Meanwhile, in the United States, a 2006 law in Tamaqua Borough, Pennsylvania, was the first rights-of-nature law to go into effect in the country, according to Osprey Orielle Lake, executive director of the Women’s Earth and Climate Action Network and a member of the executive committee for the Global Alliance for the Rights of Nature; it prevented corporations from applying waste sludge to the land. She says that “since then, more than three-dozen communities in the US have adopted such laws.” In 2010, Pittsburgh’s city council, for example, passed an ordinance recognizing the rights of nature as part of a ban on fracking. And in 2017, Lafayette, Colorado, recognized the rights of humans and nature to a healthy climate and banned fossil fuel extraction. LEBOR, though, would be the first law that would grant legal rights to a body of water.

Under rights-of-nature laws, industry, of course, can continue, “but only in so far as it does not violate the Earth’s natural systems to survive,” says Lake.

Industry, though, has unsurprisingly provided the strongest pushback to LEBOR—specifically the farmers and agriculture companies in the area. Yvonne Lesicko, vice president of public policy at the Ohio Farm Bureau, claims LEBOR is simply unenforceable—because runoff pollution is difficult to trace back to one source—and she argues that it’s also unconstitutional because it would allow Toledoans to sue any business connected to the Lake Erie watershed, including those outside the city.

“We are looking at every possible legal option at this point,” says Lesicko. “We have not made any decisions about how we’re going to proceed [if it passes], but I would say every legal option is on the table right now.”

Lesicko also counters the idea that farmers are currently acting recklessly toward the lake, saying that they are in fact concerned about the pollution in Lake Erie and are pushing individual conservation measures rooted in “research-based” science, like planting cover crops and reducing the amount of fertilizer they use. Lesicko told the New York Times it’s important to be patient because it could take decades to see how these activities improve the lake’s health. (Still, according to a 2016 study led by researchers at the Ohio State University, agricultural conservation practices like limiting fertilizer use and others Lesicko mentioned wouldn’t be enough to ensure clean water in the long term.)

On the flip side, while litigation could be expensive for farmers, O’Dell argues that seasonal, toxic algal blooms are also costly, but for lakeside businesses that rely on money from tourism and recreation. As she points out, in 2014 restaurants in Toledo were asked to shut down, though it is unclear how much the algal bloom event cost businesses in all.

“Everybody needs to drink the water. Doesn’t matter if you’re red or blue.”

Although Toledo, like many cities, is a Democrat–dominated area, Miller says campaigning in a state that supported Donald Trump in 2016 has been challenging, and they’re not sure how the vote will land on Tuesday. People, she says, have slammed doors in the group’s face, and once someone shouted at a volunteer, “The lake doesn’t pay taxes! It shouldn’t have rights!” Advocates counter that access to clean water should be a nonpartisan issue. “Everybody needs to drink the water,” O’Dell says. “Doesn’t matter if you’re red or blue.”

Over the campaign, Toledoans for Safe Water has put out mailers and yard signs in support of LEBOR, but in its last stretch, anti-LEBOR radio ads paid for by a group called Toledo Jobs and Growth Coalition have called the ballot measure “anti-job” and said it is being run by “out of state extremists,” according to local reports.

Miller says she is “optimistic” right now. “I think that people are aware of the issue,” she adds. “And I think that the people who really get it and really care understand the importance of coming out and voting.”

Ultimately, to LEBOR supporters, getting the measure on the ballot—whether it passes or not—has been something of a success in and of itself. And if it fails, Miller says they’ll try again. “The group knows they’re going to be challenged. They’ve already been challenged just to get on the ballot,” says O’Dell. “But even if they lose—it’s not the end. It’s the beginning.”

Correction: Advocates attended a 2015 talk by the Community Environmental Legal Defense Fund. A previous version of this article misstated the year.