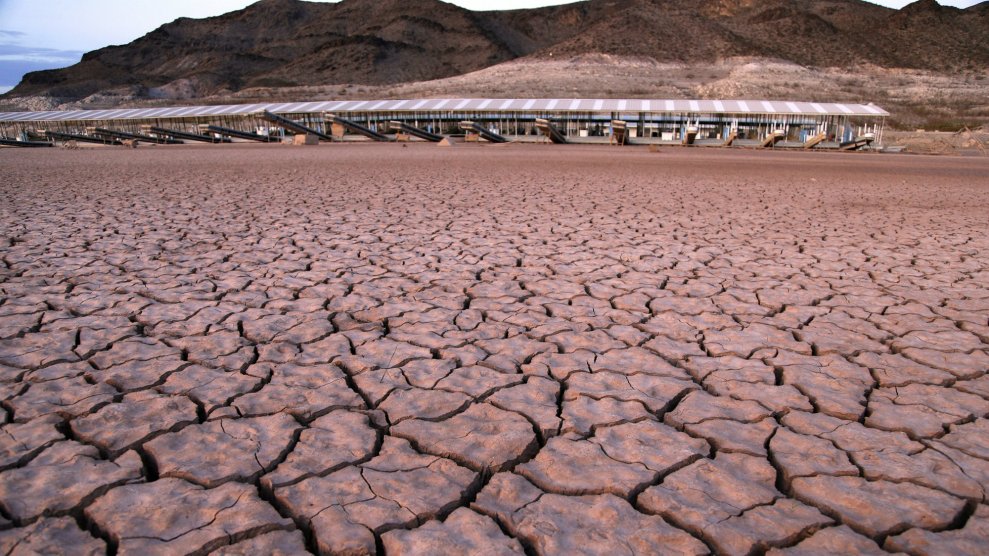 What was once a marina sits high and dry due to Lake Mead receding in the Lake Mead National Recreation Area in Arizona.John Locher/Associated Press

The furrows in a 60-acre patch of dirt on Rodney and Tiffany Shedd’s Arizona farm still hold cotton scraps from last year’s crop. This year, that patch will stay barren for the first time in recent memory, thanks to the decline in Colorado River water for farms across Pinal County, one of America’s cotton-growing centers. The farmers’ supply was cut because Arizona’s growing cities are taking more water than ever.

“We will fallow from here to the white tank,” said Rodney Shedd, driving past the barren field and pointing toward a water tower nearby.

And that’s just the start of water-slashing, due to drought, climate change and a proposed state plan to prop up the over-allocated Colorado River and its shrinking reservoir. Lake Mead has supplied the Shedds’ farm for decades through the $4 billion Central Arizona Project, or CAP.

Starting next year, deeper cuts to CAP supplies are expected, and despite receiving subsidies for wells to replace that lost water, 200 Pinal farmers will have to fallow up to 40 percent of their lands by 2026. The cuts to cities and tribes won’t be nearly as big—certainly not enough to slow the development that has returned Arizona to a spot among the nation’s fastest-growing states.

“We didn’t see this issue coming until it was here,” Shedd said. He quickly corrected himself, noting that the irrigation district to which he belongs had started leaving a small portion of its river water in Lake Mead a few years ago to delay the day of reckoning. Still, the reality of the larger cuts is just starting to sink in.

Only the timing should come as a surprise. Statewide, farmers use 70 percent of Arizona’s water, but have long held the lowest legal priority for river water. Under a 2004 settlement, they agreed to give up all their CAP water by 2030, in exchange for cheap rates to buy it. But hotter, drier weather, stoked by climate change, dropped Mead’s level much faster than experts had predicted.

The drought plan, approved in January by the Arizona Legislature, reduces Arizona’s total CAP take by one-third in 2020 and by nearly half by 2026, in hope of delaying the day when Lake Mead’s water levels drop so low that Arizona cannot use it. Before it takes effect, however, the state and water users must approve a set of legal agreements by a March deadline set by US Bureau of Reclamation Commissioner Brenda Burman.

Arizona’s water negotiations have been painful for most involved. The Gila River Indian Community, for example, has a right to the state’s biggest share of CAP supplies and would have had to take a large cut. The tribe would have received $92 million from the state and feds in compensation—far less than the tribe’s attorney, Jason Hauter, says the water is worth. The tribe, however, threw a wrench into the drought plan when it announced recently that it would not sign its part of the plan, because State House Speaker Rusty Bowers had been pushing legislation that the tribe believes undermines its water-rights claims to the Gila River in eastern Arizona. Tribal officials said they still won’t sign onto the drought plan without getting assurances that the bill will never be revived.

Arizona’s metropolitan areas have emerged as the clear winners in the negotiations. Cities in Phoenix’s mushrooming Maricopa County—the fastest-growing in the US—will receive higher priority.

Pinal has received more federal farm subsidies than any other Arizona county — $571 million from 1995 to 2017, according to a database kept by the Environmental Working Group. The Shedds were among them, gaining nearly $2 million from a program that pays farmers when cotton prices fall too low.

Though they’ll lose a lot in the long run, farmers will get $22.5 million from the state and CAP’s governing district and potentially another $25 million from the federal government to build infrastructure to access groundwater. That may prolong their survival, but many environmentalists and water experts see the well subsidies as a step backwards.

The fear is that with the CAP water gone, farming will revert to its unsustainable past—pumping out far more groundwater than nature replenishes. That practice has triggered major land subsidence and ground fissures up to nearly two miles long. The farmers, however, say that they won’t pump as much groundwater as they did before CAP arrived.

“This is the main industry for Pinal County,” Tiffany Shedd said. “By not (offering subsidies), you are basically sending this county into a major economic depression that would be almost instantaneous.”

But why keep agriculture afloat in this increasingly arid valley?

Tiffany Shedd and other Pinal Count farmers point to their history: The farmers were the first group to push for CAP’s construction, back in the 1940s, and they used the water for many years before the cities were big enough to justify taking it. Plus, they know how to conserve their supply. “We are 80 to 90 percent efficient on water now. You’re talking about spending millions and millions to become 1 percent more efficient,” Tiffany said. “I do think these wells, either ones we fix up or new ones we drill, are energy-efficient and will make more efficient use of electricity.” But ultimately, that sidesteps the real problem: More water rights were issued than the Colorado River can support.

“I see the mentality up there: ‘As long as we have water, why not use it recklessly?’ “

“I don’t see a lot of efficiency in the way they put water for the grass for front yards. Tucson doesn’t tear out their desert. They put the homes in the desert. In Phoenix, they take out all the desert plants, and put in the grass,” Shedd said. “I see the mentality up there: ‘As long as we have water, why not use it recklessly?’ ”

But it’s not that simple: Despite its lawns and growing population, Phoenix has cut its water use 30 percent in the last two decades.

Many local farming families have come to view the drought negotiations as a threat to their entire way of life. Frank Shedd Jr., Rodney’s grandfather, started farming here in the 1930s. Now, the Shedds and other families in the area are being forced to adapt.

“When you talk about fallowing our business, bankers are going to look at that and say, ‘No’ ” to loaning money to farms to buy new tractors or install water-saving technology, Tiffany said. “The only reason we can stay in business is that we have very little debt.”

Using mainly well water, the Shedds will have to find some productive winter crops, and not put everything in one crop, said Rodney. He noted that wells could be used year-round but that cotton isn’t grown in the wintertime. “If we plant all cotton, we plant everything in April and the first of September. You just can’t pump that much water in that time.”

And so the Shedds, like other local farming families, have had to think about their future. Tiffany said they would love to start growing industrial hemp, a water-thrifty plant whose production was legalized in the recently passed federal farm bill. “We might be able to grow it really, really well,” Tiffany said. “But what infrastructure do we need? How do we get the financing to build that? Those things don’t happen overnight.”

The drought plan basically ignores the population growth and sprawl that have charged Arizona’s economy since World War II. Phoenix-area cities are taking small-enough cuts that their customers won’t be affected for at least seven more years, when the plan expires and must be rewritten.

Throughout this debate, Arizona leaders from Gov. Doug Ducey, R, on down have stressed that the plan’s main purpose besides protecting Lake Mead is to assure investors nationwide that Arizona has enough water for continued development. That’s because a decade after the financial crisis killed its housing industry, Phoenix is booming again.

Douglas Ranch, a megaproject that had been on hold since the bust, will soon break ground in the far-flung western suburb of Buckeye. The developers hope to have 1,000 home lots on the market in less than 2 years, eventually playing host to 119,000 homes and 300,000 people.

Project developer Jerry Colangelo has called it the West’s largest planned community. He told a local TV station that the project sits atop a plentiful aquifer—a “100-year water supply.”

That may not be enough, though. Such developments must prove they have access to a renewable water supply such as the Colorado River—and as the urgency of the drought negotiations has illustrated, that supply is far more difficult to guarantee.

Tiffany Shedd wouldn’t comment on Colangelo’s project specifically, but she does wonder if Arizona will be the same without the green spaces of farms surrounding its cities. Farms have been giving ground to urbanization for decades; the only question is how fast it will continue. She has seen the transition in her own backyard.”We rush out to this desert, pave it over and use groundwater to sustain that till when?” observed Kathy Ferris, a former Arizona Department of Resources director. “This is the mindset of Arizona. This is how we grow.”

This year, some family friends opened a restaurant named the Cotton House, whose windows look across the street towards the Shedds’ cotton fields. Its menu displays paintings of people picking cotton, and just two days after its Valentine’s Day opening, Cotton House drew 900 customers. But “pretty soon,” Tiffany said, “those fields won’t be growing cotton anymore, and people will ask, ‘Why do they call it that?’ ”