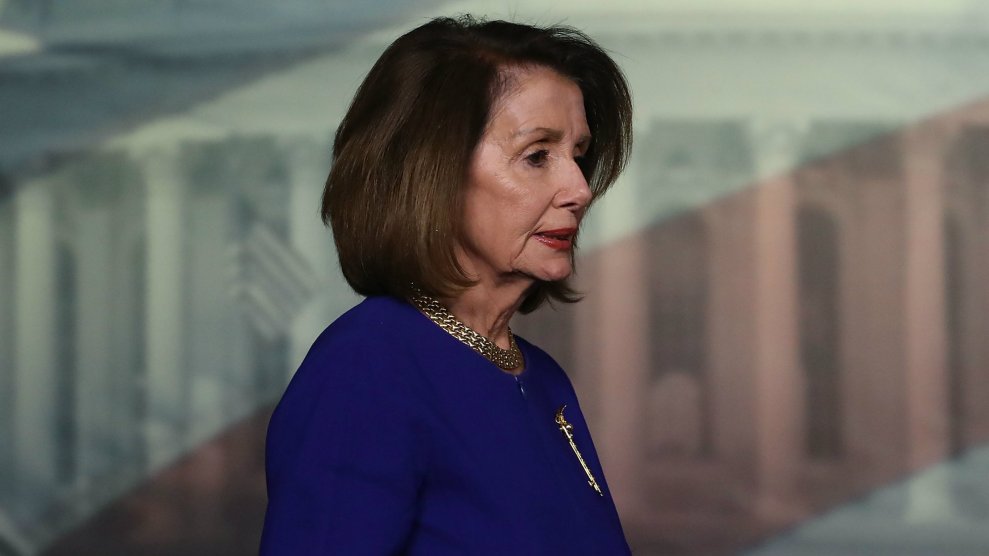 The nine Democrats selected by House Speaker Nancy Pelosi (D-Calif.) to serve on the Select Committee on the Climate Crisis received a combined $198,000 from fossil fuel industry political action committees in the 2018 election cycle.

The majority of the donations went to Rep. Ben Ray Lujan (D-N.M.), who raised $117,000 from PACs connected to oil, gas, mining and electric utility corporations. Those donations constituted 6 percent of all contributions raised by Lujan. The rest of the appointees received scant funds from fossil fuel PACs. The data comes from the Center for Responsive Politics, a nonprofit that classifies campaign donations by industry.

Pelosi appointed the nine members to the committee on Thursday. Democrats created the select committee after winning control of the House of Representatives in the 2018 elections. It is tasked with coming up with policies to respond to man-made climate change.

Fundraising from the fossil fuel industry has been a flashpoint in the debate over the committee’s creation. Activists have pressed members to reject all fossil fuel money as a sign that they are independent from an industry that has worked hard to suppress climate science and deny any action to forestall disaster.

“That’s $200,000 of potential conflict of interest on an issue of grave concern,” said David Turnbull, a spokesman for the coalition of groups that oversee the No Fossil Fuel Money Pledge. “If you’re going to be talking about the critical issue of climate change, you need to rid yourself of the influence of the fossil fuel industry.”

Rep. Mike Levin (D-Calif.) was the only member named to the committee who has signed pledges promising not to raise money from corporate PACs or the fossil fuel industry. Prior to signing the No Fossil Fuel Money Pledge, he did receive $1,500 from the National Association of Truck Stop Owners, a trade group that lobbies on behalf of highway gas stations for truckers.

Rep. Kathy Castor (D-Fla.), the select committee’s chairwoman, said in December she would consider taking the pledge, but Turnbull confirmed her office has not yet made any commitments. A Castor spokesman said she “will not accept contributions from the fossil fuel industry.” Last month, Castor divested shares of a mutual fund with fossil fuel utility holdings after the watchdog site Sludge reported she and her husband had up to $100,000 in investments in the fund.

Committee Democrats may not have raised huge sums from fossil fuel industry PACs, but a few of them have collected significant contributions from corporate donors. Lujan raised $1.1 million from business and industry PACs—more than half of all the money he raised in the 2018 election cycle. Reps. Suzanne Bonamici (D-Ore.), Julia Brownley (D-Calif.), Donald McEachin (D-Va.) and Castor all raised more than $300,000 apiece from corporate PACs in the last election.

“My values and voting record are clear,” Lujan said in a statement to HuffPost. “I’ve been battling climate change and advocating for the generation of renewable resources and energy efficiency since my time as the Chairman of the New Mexico Public Regulation Commission, before I was a Member of Congress. I respect and recognize New Mexico’s long history as an energy state, that is why, throughout my career, I have fought to ensure that New Mexico is a leader in our clean energy future.”

A spokeswoman for Bonamici said the “congresswoman generally does not sign pledges but has never taken money from big oil.”

The announcement Thursday of the panel’s additional members came just hours after Rep. Alexandria Ocasio-Cortez (D-N.Y.) released a resolution outlining the core pillars of a so-called Green New Deal, an unprecedented national plan to scale down greenhouse gas emissions over the next decade.

At a press conference announcing the resolution, Ocasio-Cortez said Pelosi invited her to join the select committee, but she turned it down.

“This is not a snub,” the congresswoman said, noting that three members of the panel were standing beside her at the event.

Late last year, Ocasio-Cortez launched an aggressive bid to replace the climate panel with a select committee on a Green New Deal. She garnered support from roughly 40 House Democrats. But Pelosi rejected the plan, tapping Castor in December to lead original select committee.

At the time, Castor declined to call for a rule barring members who accepted fossil fuel money from serving on the panel. Ocasio-Cortez panned the congresswoman in a tweet, comparing “loading a climate committee” with fossil fuel money to “letting foxes in the henhouse.”