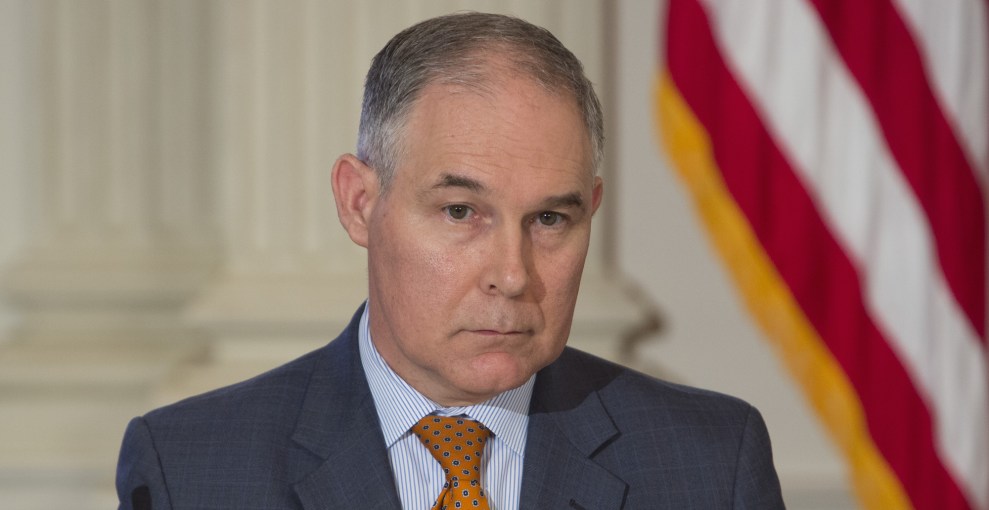 Scott Pruitt left a long trail of investigations behind when he exited the Environmental Protection Agency last July to lead a private life as a coal consultant. On Thursday, four Democratic senators added yet another concern to the pile, requesting more information from the EPA revolving around Pruitt’s legal defense fund. And Democrats can hammer the issue when Andrew Wheeler appears before the Senate on Wednesday for a confirmation hearing to become Pruitt’s successor.

Democratic Sens. Sheldon Whitehouse (R.I.), Tom Carper (Del.), Tom Udall (N.M.), and Chris Van Hollen (Md.) addressed Wheeler in a letter that raises questions about a financial filing in December that revealed a $50,000 donation to Pruitt’s legal defense fund from a Republican donor and businesswoman. An EPA ethics official noted on the report that Pruitt did not seek ethics advice before accepting the gift (another promise he made back in May that he’s broken). “EPA ethics officials did not know of this contribution—believed to be in cash —until they received the termination report,” the official, Justina Fugh, wrote.

That is a problem, the senators argue, because the Office of Government Ethics forbids officials from accepting gifts from “prohibited sources”—or entities with business before the agency. The OGE also instructs officials “to seek advice from ethics officials before accepting a gift to pay for legal expenses.”

“Plainly, Mr. Pruitt did not do so,” the senators write.

Pruitt’s single listed benefactor was Diane Hendricks, considered by Forbes the “richest self-made woman” in America thanks to her role as the chair of the wholesale roofing distributor ABC Supply Company. Hendricks owns Hendricks Holdings Company, which is invested in a range of domestic and international companies that span the steel and aluminum, recycling, real estate, and pharmaceuticals sectors.

“Because Hendricks Holdings is a privately held company, Ms. Hendricks likely has a personal financial stake in its numerous subsidiaries, any one of which may be a prohibited source,” the Democrats write.

The disclosure in Pruitt’s termination report indicates that it was a gift he received while he was still in office, observes Robert Rizzi, an ethics lawyer with experience in legal defense funds. “What it really shows is that these legal defense funds can be vehicles for getting payments from people who are affected by your agency,” Rizzi told Mother Jones. “In this case, we don’t know that. But there’s obviously potential for that.”

A 2016 economic policy adviser to Trump, Hendricks has donated millions to the Koch-backed Freedom Partners and to an anti-Clinton super PAC, which accounted for more than half the TV advertising in Wisconsin during the last presidential campaign.

The senators ask the EPA to disclose any communications with Hendricks and the companies she’s invested in starting from when Pruitt arrived in 2017, and any related investigations or enforcement actions in the last five years.

The donation—along with other Pruitt scandals—is likely to come up when Wheeler faces the Senate for his confirmation hearing Wednesday. But Wheeler will also have his own actions to account for after five months serving as acting EPA administrator. On his watch, the EPA has proposed rollbacks to rules that limited pollution for new coal-fired plants, oil and gas, and municipal landfills. He’s undermined efforts to tighten standards for soot and smog, and the cause of indoor pollution, wood-fired stoves. Just before the EPA closed in the ongoing government shutdown, Wheeler proposed a severe handicap for a major regulation that has limited the toxic pollution coming from existing coal-fired plants, the country’s top source of mercury pollution.

If the federal shutdown continues into next week, Wheeler’s hearing will come as his staff is still furloughed or forced to work without pay. The EPA’s independent inspector general is one of the offices closed due to the shutdown, meaning any of its ongoing work auditing Pruitt’s travel, hiring practices, and private email is also on hold.