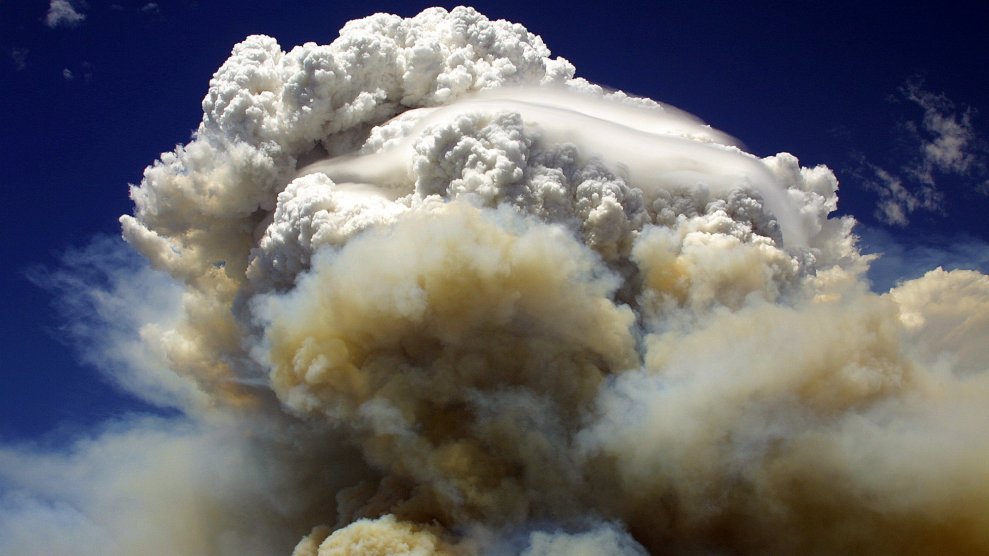 A pyrocumulonimbus cloud forms over the Willow Fire near Payson, Arizona in July 2004.Eric Neitzel/Wikimedia Commons

This story was originally published by YaleEnvironment360. It appears here as part of the Climate Desk collaboration.

Early in the evening of August 12, 2017, heat and smoke from an intense wildfire burning in the forests of British Columbia began mushrooming skyward, sucking up ash, blazing wood and vegetation, and water vapor from lakes and streams below.

Rick McRae, a researcher with Australia’s Capital Territory Emergency Services Agency, was on site helping with fire management. Sensing that this conflagration was going to erupt into something extraordinary, he texted a group of scientists from around the world who since 2013 have been collaboratively studying fire-triggered thunderstorms—technically known as pyrocumulonimbus clouds, or “pyroCbs.”

“This is a very bad day all around in western Canada,” he wrote. “Fires went ‘pop’ progressively on the leading edge.” A pyroCb was forming in the southeast corner of British Columbia, near Kamloops, McRae added, noting, “Things could get worse if certain things ‘align.'”

And align they did. As fires that would eventually consume 4,700 square miles in British Columbia burned out of control, five fire-driven thunderstorms rose over the conflagration, shooting black smoke and carbon high into the lower stratosphere, spewing noxious gases that were eventually detected almost as far north as the North Pole, and touching off more fires. At the same time, fires in neighboring Washington State spawned yet another pyroCb. “By later that night we were agape about the cluster of pyroCbs and the extremely impressive smoky anvil-shaped clouds,” recalled Mike Fromm, a meteorologist at the US Naval Research Laboratory.

Later, Fromm and David Peterson, a colleague at the Naval Research Laboratory, labeled that day’s cluster of pyrocumulonimbus clouds “the mother of all pyroCbs,” surpassing even the events of Black Saturday in Australia in 2009 when monstrous bushfires killed 173 people, injured 414 others, and burned 1,700 square miles. On that night in February, three clearly distinct pyrocumulonimbus storms erupted across the state of Victoria in southeastern Australia.

Yet another major pyroCb event occurred in May 2016 during a massive wildfire in Alberta that forced the evacuation of 88,000 people in the tar sands community of Fort McMurray. A pyroCb formed over the fire that day, and lightning from the firestorm ignited several new fires in the forest 22 miles northeast of the fire’s front, astonishing wildfire experts. “I have never heard of lightning causing new fires so far in advance of the main fire,” said Cordy Tymstra, the wildfire science coordinator for the Alberta government.

As a warming world causes larger, more frequent, and more intense wildfires, fire-driven thunderstorm events are on the rise in places—including Texas, Portugal, South Africa, and Argentina—where they have never occurred before. Mike Flannigan, director of the Canadian Partnership for Wildland Fire Science at the University of Alberta, says that pyroCbs seem to be on the rise because warmer temperatures are likely producing more intense fires with more vigorous plumes of smoke, black carbon, and water vapor, all of which increase the likelihood of pyroCbs.

Whatever the reason, these episodes can wreak havoc on fire-suppression strategies. Flannigan says that pyroCbs fires are extremely hot and chaotic, especially when the plume collapses. Winds can reach the speed of a tornado. Embers shoot in all directions—in some cases up to three miles. That means sending firefighters in to fight them on the ground is impossible, according to Flannigan.

Winds can reach the speed of a tornado. Embers shoot in all directions—in some cases up to three miles. That means sending firefighters in to fight them on the ground is impossible.

“PyroCbs like the one that was associated with the Carr fire in California in 2018 can be catastrophic because they can generate tornado-strength vortexes,” says Flannigan.

The physics behind pyroCbs are complex and continue to puzzle meteorologists and atmospheric scientists. What we know is that when super-heated updrafts from an intense fire suck smoke, ash, burning materials, and water vapor high into the sky, these elements cool and form “fire clouds” that look and act like those associated with classic thunderstorms. The heat and the particulates in the smoke almost always trigger a dynamic reaction that arrests the ability of the cloud to produce precipitation. What’s then left is a lightning storm that moves across the surrounding landscape, triggering more fires, as happened near Fort McMurray.

Interest in pyroCbs is increasing among wildfire scientists. Last month, an entire session at the American Geophysical Union (AGU) meeting in Washington, D.C. was devoted to the subject of pyroCbs and how they can potentially impact weather and climate in the same way volcanic eruptions have in the past. Fromm of the US Naval Research Laboratory has been instrumental in proving that pyroCbs—a long-known, but relatively rare meteorological phenomenon—have as much energy and impact as moderate-sized volcanic eruptions.

Fromm and others have shown that smoke and aerosols from wildfires can rise high into the stratosphere, where they can linger for months, scattering the rays of the sun. The impact is similar, though on a much smaller scale, to volcanic eruptions like Mt. Pinatubo in the Philippines, which occurred in 1991. That eruption spewed massive quantities of sulphate aerosol emissions that blocked some of the sun’s rays and cooled the climate globally by about 1 degree Fahrenheit for 15 months.

Penfei Yu, a scientist at the Cooperative Institute for Research in Environmental Sciences in Boulder, Colorado reported at the AGU meeting that simulations he and his colleagues conducted show that smoke and black carbon from the August 2017 pyrocumulonimbus clouds in British Columbia and Washington may have lingered for eight months because there is no rain that high in the stratosphere to wash the clouds away.

What goes up must eventually come down, which explains what happened when Canadian scientists at a High Arctic air monitoring station on Ellesmere Island, 700 miles from the North Pole, detected extraordinarily high levels of ammonia, carbon monoxide, hydrogen cyanide, and ethane—chemical compounds that are consistent with what the 2017 pyroCb event injected into the stratosphere.

“This was a very unusual event,” says Kimberly Strong, chairwoman of the physics department at the University of Toronto. “We saw something like this following the massive 2010 fires in Russia, but not anywhere near the concentrations we saw in 2017. Our colleagues in Greenland recorded the same thing happening there.”

Fromm’s interest in pyroCbs began in 1998 when the satellite instruments he was using were homing in on strange-looking clouds in the stratosphere in the summer. Strange, because clouds like these usually only form in winter. This wasn’t the first time that scientists had seen summer clouds like these in the stratosphere. Puzzling images of aerosol clouds appeared periodically over the boreal regions of North America in the summers from 1989 to 1991.

But the scientists who identified them then concluded that they must have come from volcanic eruptions because the researchers, like everyone else in the scientific community, believed that pyroCbs didn’t have the energy to get past the troposphere, which contains most of the Earth’s atmosphere and where weather is generated. There was, however, just one problem, according to Fromm. There was no documentation of a volcanic eruption anywhere in the world during that time.

That’s when Fromm began doing some detective work to determine whether pyroCbs might be responsible. Among the first people he called was René Servranckx of the Canadian Meteorological Center. Servranckx, according to Fromm, was crucial to making the case for the pyroCb explanation because he demonstrated that they had enough energy to send smoke into the stratosphere.

Using satellite image data and laser-based LIDAR imaging, Fromm eventually linked clouds in the stratosphere detected in the summer of 2001 to extreme pulses of smoke from the Chisolm fire in Alberta, which burned 287,000 acres and was one of the hottest fires on record. The smoke from a pyroCb generated by that fire drifted completely around the world more than once.

Then, in July 2008, Fromm and an international group of more than 100 scientists descended on a NASA-led research base site at Cold Lake, Alberta to track smoke from wildfires that were burning in western Canada. In a research plane, a small group of them made the first-ever flight into an active pyrocumulonimbus cloud to get measurements in the updraft core. Unlike conditions found in the core of any other cloud, this one produced total darkness, courtesy of the abundance of smoke and small cloud droplets. Flying into a suspected pyroCb that day, Fromm could smell forest fire smoke at 34,000 feet inside the NASA aircraft. It underscored the fact that wildfires could send smoke from the troposphere, where the pollution it generates is a regional problem, into the stratosphere, where it becomes a global phenomenon.

PyroCb events appear to be increasing dramatically, producing more energy, and erupting in places where they have never been seen before. No one knows what the rate of increase is for pyroCbs. But there is little doubt they will occur more frequently in parallel with the larger and hotter wildfires we are already witnessing as the world warms.

Since the turn of the century, an average of 73,200 wildfires have burned roughly 6.9 million acres in the U.S each year. This is nearly double the 3.3 million acres burned annually in the 1990s.

“Figuratively, we have a map pinpointing the location of pyroCbs events,” says Fromm. “It’s been filling up fast. Maybe we’re better at detecting them, but I think they’re increasing.”

Researchers say they are now documenting an average of 25 single-pyroCb events a year in western North America. The thing to watch out for in the future, says Fromm, is what will happen if we see more of the multiple pyroCbs events, like the ones that occurred in 2017, which were an order of magnitude larger than previous benchmarks for extreme pyroCb activity. One pyroCb may not have the weather and climate-altering capacity of a significant volcanic eruption, but several clusters occurring in a year might.

“PyroCbs are not in the Pinatubo category,” says Fromm. “But the thing to consider is that volcanos occur sporadically. PyroCbs occur every year.”