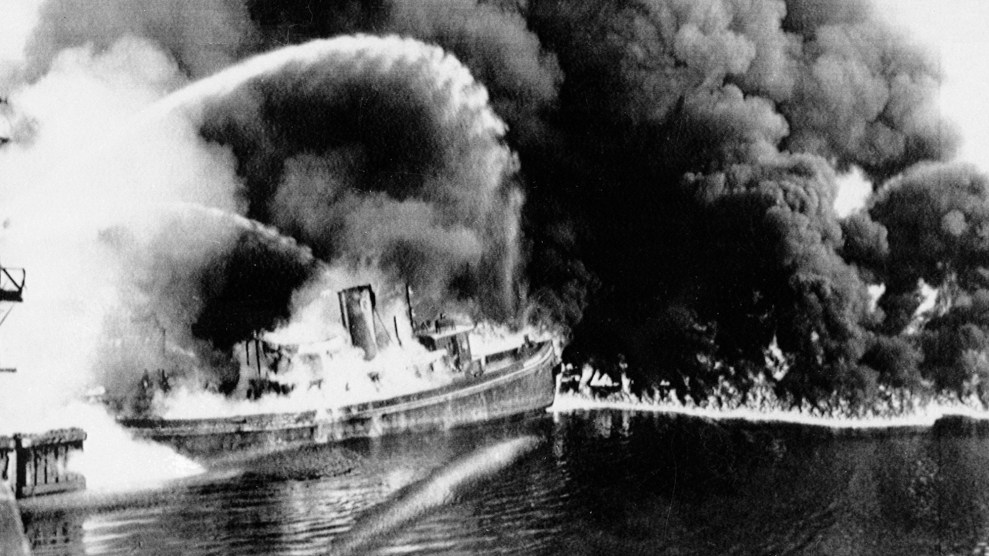 The Trump administration unveiled a proposal on Tuesday weakening federal water protections for millions of acres of streams, wetlands, and waterways that will likely affect the drinking water for more than one-third of Americans. While the Trump administration specifically targeted the 2015 Obama-era rule known as the Clean Water Rule, or Waters of the United States, the proposal goes further in rolling back environmental oversight than has occurred with any president since Ronald Reagan.

Inside the Environmental Protection Agency on Tuesday, the focus of a celebratory 90-minute event was not on water quality. Some two-dozen speakers from the Trump administration, including Interior Secretary Ryan Zinke and EPA Acting Administrator Andrew Wheeler, were joined by some members of Congress, to criticize the Obama-era rule as federal overreach. Senator Pat Roberts (R-Kansas) declared he was “nervous” when he finally entered the EPA for the first time in his four decades in Congress, claiming the EPA is usually a “four-letter word,” but now the agency can be renamed, the “Environmental Farm Protection Agency,” because of the new rule’s deference to agricultural interests. He was only one of the agency’s fiercest critics who spoke to the audience, many of whom were members of the American Farm Bureau Federation, a powerful agricultural lobbying arm.

The EPA and the US Army Corps of Engineers proposal, now open to 60 days of public comment, dramatically restricts which bodies of water fall under the 1972 Clean Water Act regulations. The 2015 Obama rule expanded the definition to include 2 million more acres of streams and 20 million more acres of wetlands, triggering years of backlash and lawsuits led by agriculture, real estate developers, and other industries. The proposal announced today will limit Clean Water Act regulations to major waterways, their tributaries, and adjacent wetland, but will exempt other wetlands and streams that flow seasonally during heavy rainfall. These would be subject to wide-ranging state and local oversight, if any. Today’s proposal also replaces a Bush-era rule that subjected some of these streams to regulations if they are significantly connected to navigable waters—a rule that has been in place for half the country.

Conservative critics have waged a proxy fight against the Clean Water Rule by framing it as government overreach undermining the rights of farmers and local government. A common talking point was to claim the EPA wanted to regulate “puddles” after it rained on farmland. But in some areas, the so-called puddles—now exempt from the Clean Water Act—involved over half the water flowing into major rivers, explains Blan Holman, managing attorney in Southern Environmental Law Center.

“When you shrink that definition, you’ve now reduced the universe of waters that are protected,” Holman tells Mother Jones. “If you’re concerned about drinking water sources, you need to be concerned about what’s flowing into those reservoirs and those rivers.”

Obviously, acting EPA head Wheeler is not bragging that the rule will compromise water quality. “Our proposal would ensure that our water protections—among the best in the world—will remain strong while giving states and tribes the certainty to manage their waterways in ways that best protect their natural resources and economies,” he said in his speech. When the rule is finalized there will be lawsuits challenging him on his claims that it will leave the water protections in the US as strong as ever.

The announcement also marks a recent shift in the Trump administration’s deregulatory push, as it is beginning to cement its legacy.  Scott Pruitt was only able to kickstart dozens of rollbacks during his tumultuous tenure, since regulations can take as long to undo as they take to promulgate. Given Wheeler’s likely Senate confirmation as the head of the EPA, the former coal lobbyist can see that mission through to the end, by replacing Obama-era rules with much weaker versions. Recently, the EPA has moved forward with undoing climate regulations for cars, and new and existing coal-fired plants. Meanwhile, the Interior Department has weakened the Endangered Species Act and is accelerating drilling in the Arctic National Wildlife Refuge.

There are mounting lawsuits from Trump’s opponents challenging these decisions, and a handful of wins so far when courts have found agencies violated administrative procedures in their rush to deregulate. The agency’s required public comment period often plays another role in the rule’s fate—the first 2015 Obama proposal considered more than 1 million public comments.

“I’ve been watching this circus for a while now and I don’t hear any mention of science,” Holman says. “They’re drawing lines based on political desire.”