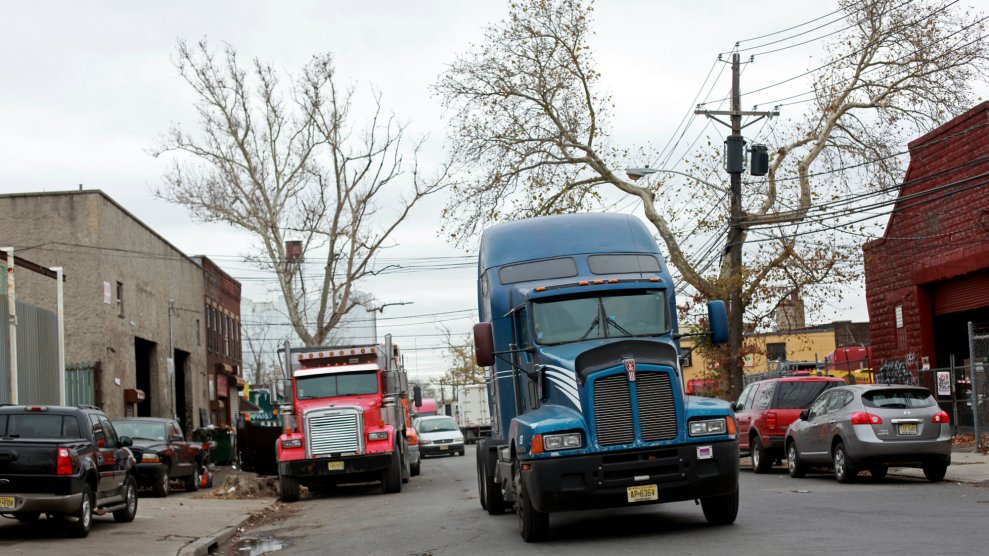 The Environmental Protection Agency announced a new effort to slash pollution from heavy-duty trucks, surprising critics who say the move is the Trump administration’s first to increase regulations on emitters.

Flanked by the heads of trucking industry associations, Acting EPA Administrator Andrew Wheeler said the push, dubbed the “Clean Trucks Initiative,” will include a rule to toughen standards on nitrogen oxides, the emissions that cause asthma-triggering smog.

“We are under no regulatory or court-ordered requirements to launch this initiative,” Wheeler said on an embargoed call with reporters Monday night—remarks he echoed in Washington on Tuesday afternoon. “We are doing it because it’s good for the environment.”

“As the French say, even the blind pig sometimes finds the truffle!”

Details are hazy on the plan, which is expected to include eliminating other trucking regulations the EPA deems onerous to lowering emissions. At the press conference, Wheeler touted the EPA’s efforts to gut regulations that cost industry players a combined $1.6 billion, and said he planned to propose 49 additional “deregulatory actions estimated to provide up to $100 billion in savings.”

Still, environmentalists hailed the announcement as the administration’s first concrete move to ramp up rules on a heavily-polluting industry.

“It looks as if Team Trump will make it one in a row for the environment,” said Daniel Becker, the director of the Washington-based Safe Climate Campaign’s Center for Auto Safety. “Or as the French say, even the blind pig sometimes finds the truffle!”

The industry itself rallied behind the announcement. On Tuesday, the Truck and Engine Manufacturers Association called the initiative “a tremendous opportunity.’

“We—EPA and the manufacturers—have done this before, and we’re ready to step forward to do it again,” Jed Mandel, the trade group’s president, said in a statement. “We ask the Agency to follow that same successful roadmap by leading a collaborative, open regulatory process involving all stakeholders.”

The announcement comes three months after the administration proposed dramatically weakening fuel economy standards, clearing the way for vehicles—the nation’s top source of climate pollution—to emit an addition 600 million metric tons of carbon dioxide, equivalent to Canada’s entire annual emissions, by 2030. On Monday’s call, Bill Wehrum, the head of the EPA’s Office of Air and Radiation, said “the situation” with cars and light-duty trucks “is much different from heavy-duty trucks.”

“It’s an apples and oranges thing,” he said, without going into detail.

Yet the effort bears remarkable similarities to the fuel economy rule. The move came in response to a petition submitted in late 2016, for which California is already racing to draft regulations. In hopes of creating a 50-state standard, the EPA is now stepping in.

“If the agency is legitimately responding to the petition that was submitted in 2016 and moving forward to look at the technologies now available to greatly reduce NOx emissions, that would be a positive for air quality and public health,” Janet McCabe, Wehrum’s predecessor under Obama, said in an email.

But the policy could also undercut the EPA’s stalled effort to cut Obama-era air pollution limits for trucks with rebuilt engines. Wheeler reversed former Administrator Scott Pruitt’s decision to halt enforcement of the so-called “glider rule” in July after 16 states sued to force the agency to regulate the “super-polluting” trucks.

The final rule is now listed in the Federal Register as “to be determined.”

“What will EPA’s final position be on glider kits?” said Stan Meiburg, a former acting deputy EPA administrator who spent 39 years at the agency. “It would be inconsistent for the agency to regulate new engines more tightly while allowing a loophole for discounted, older, more polluting engines to remain in commerce.”