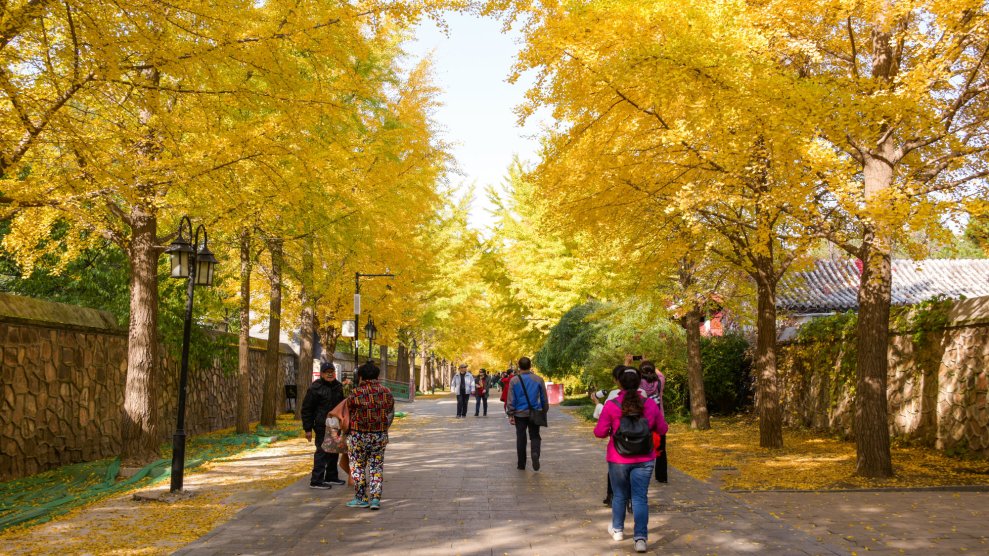 A gingko tree stands outside my bedroom window in Brooklyn. For seven months a year, I see nothing but leaves and sky; at night, the fan-shaped leaves cast flickering shadows on my walls. In October, the leaves turn the brilliant, luminous yellow of a stoplight. And then, one night—this year it was on Thursday—all the leaves fall, blanketing the sidewalk and cars below in gold. The houses across the street rush into view, where they’ll stay until new leaves bud.

Oliver Sacks called this phenomenon the “Night of the Gingko.” Compared with the slow decline of its deciduous neighbors, the gingko’s rapid defoliation appears to be unnatural. Fall becomes winter overnight. The same night my gingko lost its leaves, a record-breaking fall snowstorm caught the rest of New York’s trees by surprise, loading their leafy boughs up with snow. All night, branches came crashing down in the street, overwhelmed by the combined weight of two substances that rarely touch.

Stepping across the gingko leaf carpet this year, I thought of how fast nature seems to leap from one state to the next, in fires and floods and in sudden declines of once-common species like the monarch butterfly. The whole earth is the night of the gingko.

In the gingko’s case, the rapid transition is natural and ancient. But it is a document of climate change in another way. In 1977, the poet Howard Nemerov described the eerie sense that the gingko appeared to drop its leaves as if through some hidden natural command:

What signal from the stars? What senses took it in?

What in those wooden motives so decided

Rebellion or surrender? and if this

Can happen thus, what race shall be exempt?

What use to learn the lessons taught by time.

If a star at any time may tell us: Now.

Nemerov wasn’t far off. The timing of the gingko’s leaf dump is a response to hidden, natural signals that we can measure but can’t quite sense. Like California’s infernos after months without rain or record Atlantic hurricanes from a heated ocean, it’s a shock derived from months or years of antecedents.

The Japan Meteorological Agency has been monitoring the gingko’s “leaf fall day” since 1953. Researchers have found that leaf fall day occurred eight days later in 2000 than in 1953. Gingko budding happened four days earlier. Gingkoes spent 12 more days with leaves in 2000 than in 1953, a time during which annual air temperature in Japan increased by 2.3 degrees Fahrenheit. Researchers in South Korea studied when gingko leaves turn yellow and found an annual delay in the leaf coloring date by nearly 12 hours a year between 1989 and 2007—adding up to nine more days of green.

Closer to home, the gingko tree at the University of New Hampshire’s James Hall—in a state where fall temperatures have risen 2 degrees Fahrenheit since the 1970s—has been dropping its leaves later and later every year, as Robinson Meyer noted in the Atlantic last year. Secretaries for the school kept records on a handwritten sheet of paper that the soil biologist Serita Frey found a few years ago. She has digitized and updated it since. This year, she said, the date slid back to Oct. 31 from Nov. 9 last year. But the trend line (the records start in 1977) is clearly pointing in the other direction.

The James Hall records constitute one entry in an enormous trove of data by citizen scientists showing how climate change is stretching and compressing seasons, altering the fragile balance of phenology, or biological timing. Trees unfold their leaves earlier and lose them later, sometimes dramatically so. It’s easy to brush off a few days as not mattering much, but these changes mean co-dependent species are decoupling in time, threatening the survival of one or both. One example is the red knot, a shorebird that makes an astounding 9,000-mile migration to the Arctic each year, where it raises its young. The migration is timed so that little birds can gorge on hatching insects, but as the Arctic warms, the insects are hatching earlier. By the time the red knots arrive, the hunting isn’t what it used to be, and the birds are suffering.

What makes the case of the gingko particularly compelling is that the tree is a living fossil; it is virtually unchanged from the Cretaceous period, when Tyrannosaurus rex would have hunted under its branches. The tree has no surviving relatives. Peter Crane, the dean of the Yale School of Forestry and the author of Gingko, argues that the trees owe their continued existence to humans, who have maintained and propagated them for ornamentation for centuries now.

At the Smithsonian Environmental Research Center in Maryland, 15 gingko trees are growing in little greenhouses like quarantine patients. Some trees are raised in air with 400 parts per million carbon dioxide (today’s conditions), some with 600 ppm (the projected near future), some at 800 and 1,000 ppm (designed to mimic a warmer, past earth that had no ice caps). By studying how leaves develop in elevated carbon levels right now, the researchers can work backwards to discern historic carbon levels from gingko fossils—and, perhaps, use that information to project what lies in store for us.

It’s a hardy tree. That’s one reason the city of New York has planted so many of them—five on my block alone. They are tolerant of salt, drought, pests, and the root compaction that characterizes arboreal urban life. But they appear as susceptible to the changing temperature as the rest of us, giving us an answer to Nemerov’s question. “What race shall be exempt?” None.