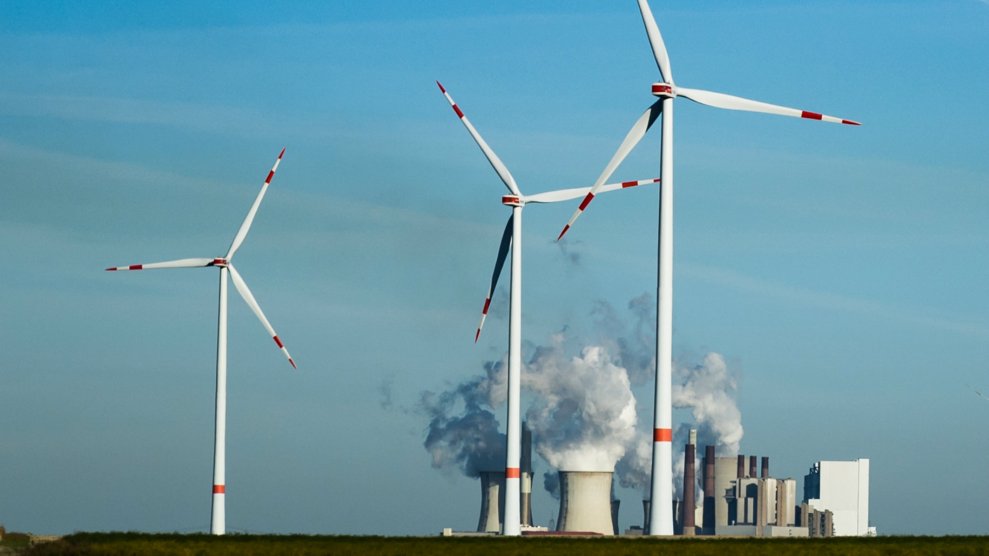 This story was originally published by the Bulletin of the Atomic Scientists. It appears here as part of the Climate Desk collaboration.

Under the 2015 Paris climate accord, 195 national governments committed to curbing carbon emissions to mitigate climate change. After the Trump administration decided in 2017 to withdraw the United States from the agreement, American states, cities, and companies stepped forward, saying they would continue efforts to reduce emissions and meet the requirements of the global agreement.

Although no substitute for a reasonable national climate policy, these decentralized efforts are welcome. A newly-released report from the Intergovernmental Panel on Climate Change outlines the dire consequences if greenhouse gas emissions continue to rise on their current path: By 2040, scientists expect that extreme weather—like hurricanes, heatwaves, and droughts—will be normal, food and water shortages will affect hundreds of millions of people, and vector-borne diseases like malaria and dengue fever will spread to new regions. The United States remains the second-largest greenhouse gas emitter in the world after China, with among the highest emissions per capita. Decentralized efforts, like the recent law committing California to obtaining all its electricity from clean energy sources by 2045, are essential to reducing US emissions.

But Trump’s Paris withdrawal creates another problem too: A massive gap between the money needed to address climate change and available funds. In Paris, developed countries called the need to ramp up climate finance for developing countries “urgent,” and reaffirmed a commitment to mobilize $100 billion annually from public and private sources. Former US President Barack Obama pledged an initial $3 billion to one of the funds that distributes climate finance—money to help reduce emissions and adapt to climate impacts—but delivered only $1 billion before he left office, and Trump decided not to contribute any. Funding cuts supported by the Trump administration and the Republican majority in Congress have now produced a gaping hole in available resources.

The end result is that the US withdrawal has had a two-pronged effect on global mitigation: It weakens not only the US effort to reduce carbon emissions, but also efforts in developing countries that rely on climate finance.

The end result is that the US withdrawal has had a two-pronged effect on global mitigation: It weakens not only the US effort to reduce carbon emissions, but also efforts in developing countries that rely on climate finance.

Though wealthy states have tended to see climate finance as a voluntary commitment akin to development aid, it is hardly charity. Even if for no other reason, the United States should fund mitigation in developing countries from a purely self-interested perspective. Since climate change is global, the benefits of mitigation anywhere accrue to people everywhere. And if countries with rapidly developing economies can avoid mass dependence on fossil fuels, the benefit in avoided emissions will be enormous.

Take the example of India. India was the world’s third-largest greenhouse gas emitter in 2015, after China and the United States. Yet its per capita emissions were just 1.58 metric tons per person. If Indians move toward consuming fossil fuels like Americans, who do so at a rate of 15.53 tons per capita per year, the effect will be disastrous. Most climate finance goes toward mitigation efforts that would help avoid this fate, for instance solar rooftop installations in India, a shift to renewable hydropower in Paraguay, and increasing access to clean electrical energy in Sub-Saharan Africa.

By contrast, the benefits of adaptation finance—to assist developing states in adapting to climate change effects—accrue primarily to the recipient. Money for adaptation supports a wide range of efforts, including projects to pilot drought-resistant crops, build seawalls, and evaluate the health impacts of rising temperatures. But as a principal greenhouse gas emitter, it is only fair for the United States to assist poor states, most of which have contributed little to the climate change problem and find themselves on the frontlines in dealing with the negative consequences, from flooding to heatstroke. Developing countries view this money as desperately needed compensation. They are suffering as a direct consequence of fossil fuel consumption in the wealthy world.

Given the stakes, it is worth asking: Can cities, states, and companies pick up some of the slack on climate finance, just as they are trying to do with mitigation efforts?

Given the stakes, it is worth asking: Can cities, states, and companies pick up some of the slack on climate finance, just as they are trying to do with mitigation efforts? Thanks to the way climate finance has been structured, the answer is “yes.” Climate finance is delivered to governments through international institutions like the Global Environment Facility, the Green Climate Fund, the Adaptation Fund, and a number of trust funds hosted by the World Bank, the United Nations, and other international organizations. These institutions were designed to allow non-state actors to contribute. This includes just about any entity one can think of—subnational governments like cities and states, individuals, corporations, and philanthropic organizations.

In recent years, the province of Quebec in Canada and the region of Wallonia in Belgium have made contributions to the Global Environment Facility. Paris made its own contribution to the Green Climate Fund, the first city to do so. There is no reason California, Washington, New York, and other states or cities cannot do the same. While it is unlikely that cities or states would implement a mandatory tax to support global climate funds, it would be politically viable to make individual voluntary contributions an option on state tax returns. Californians can already opt to make contributions to a range of causes on their tax forms, including several environmental initiatives like the Oceans Voluntary Tax Contribution Fund. Other states provide similar opportunities. Adding an option for citizens to contribute to a global climate fund would be inexpensive to the state and politically unobtrusive.

In the United States, individuals can make tax-deductible contributions to the Adaptation Fund through the United Nations Foundation. In fact, a few international organizations have successfully mobilized the public to financially support their work. For example, in 2017 UNICEF raised $512 million in the United States from 471,305 individuals along with 10,168 corporations, foundations, NGOs, schools, and clubs. The money far exceeds the regular resources UNICEF receives from the US Government ($132.5 million in 2017).

UNICEF funding also points to a more general trend in how international organizations are financed. Private actors, especially prominent philanthropic foundations, play an increasing role. The Bill and Melinda Gates Foundation is now the second-largest donor to the World Health Organization after the United States. Less well-known is the fact that Rotary International and the National Philanthropic Trust, a UK-based public charity, round out the top 10. Private donors have been less prominent in climate change than in global health, though they do play a role. After the United States cut funding to the Secretariat of the UN Framework Convention on Climate Change, Michael Bloomberg announced he would contribute $4.5 million to fill the gap. Some of the climate investment funds at the World Bank, like the Forest Carbon Partnership Facility, benefit from contributions from corporations like British Petroleum and organizations like The Nature Conservancy. But their donations have been relatively small.

As the recent IPCC report makes clear, the current moment requires all hands on deck. Foundations, cities, states, corporations, and citizens can contribute to help compensate for the absence of US leadership at the federal level. Last year, the Center for American Progress advocated such an approach and outlined options for pooling decentralized efforts in an “American Climate Fund.”

As with mitigation, which would be more effective if taken on at the federal level, a decentralized strategy is not ideal. Private and subnational actors will not have the same influence in these institutions as the United States would, nor would Washington gain the goodwill or soft-power advantage it would if the administration lived up to its obligations. However, taken together, decentralized efforts from the United States could raise substantial funds, which would help mitigate climate change and assist developing states with adaptation. It would also help demonstrate that Americans have not all buried their heads in the sand and forgotten what it means to hold up their end of a bargain.

This column was written by Erin R. Graham, an assistant professor of politics at Drexel University and a Global Order Visiting Scholar at Perry World House.