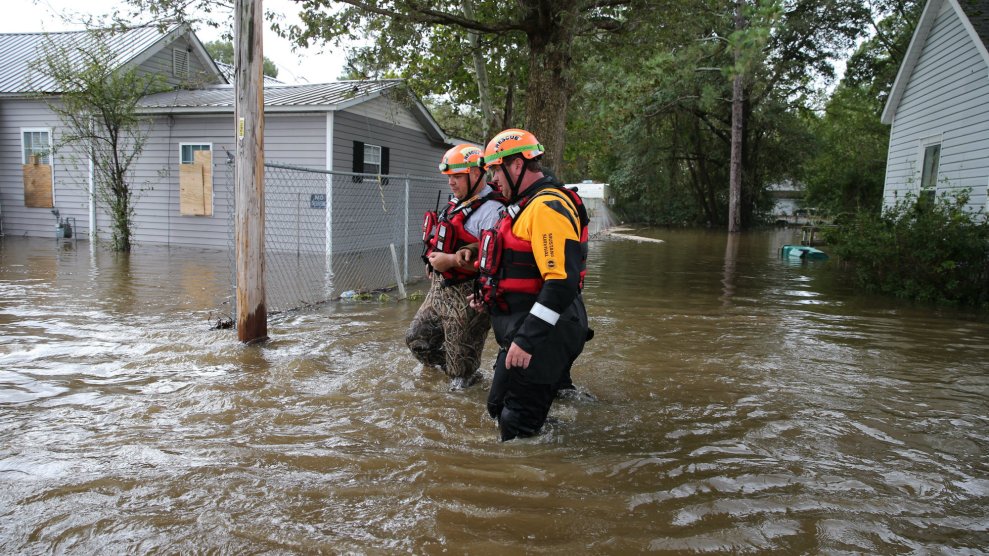 The roar of a fan boat echoed through a flooded neighborhood on the south side of town Sunday afternoon as dozens of volunteer rescuers went door to door in search of residents who hadn’t fled the rapidly rising waters.

With a mandatory evacuation order in place, the rescue teams found most homes in this neighborhood empty. At one, members of the New Orleans-based group Cajun Navy Relief encountered a woman hunkered down with multiple pets. Despite water inching toward her front door, Diana Collazo refused to leave, afraid something might happen to her animals.

It wasn’t until about an hour later, when her husband, Orlando, and her children returned to check on her that she finally accepted a ride on one of the boats, her cats in tow.

“Here we go again,” Collazo said after she was brought to safety in a church parking lot.

The Collazos have been through this before. In fact, it was less than two years ago that their home—like so many others in this low-income area—flooded during Hurricane Matthew, in October 2016. That time, Collazo says, she stayed until the water in her home was waist-high and fish were swimming around the room. The family ended up in a hotel for four months.

“There’s a lot of houses in here that haven’t been put back together from Matthew yet,” she said. Whether or not her rental home floods again, Collazo has every intention of moving back in.

Similar scenes of rescue, relocation and uncertainty could be found throughout North and South Carolina on Sunday as the storm known as Florence—which made landfall Friday as a Category 1 hurricane and has since been downgraded to a tropical depression—continued to linger over the region, dumping torrential rain and inundating communities.

Florence is now the rainiest hurricane in North Carolina *and* South Carolina history.

The 2015 South Carolina flood is still the biggest in state history though — technically it was unrelated to Hurricane Joaquin. https://t.co/o2bae7zoul

In Lumberton, as the Lumber River continued to swell above flood stage Sunday, crews with bulldozers worked frantically to reinforce a temporary berm plugging a gap in the city’s levee. The effort to hold back the floodwaters ultimately proved unsuccessful. A county spokeswoman confirmed that the barrier broke around 2 p.m., and urged residents in the west and south parts of town to “get out now.”

Shortly before the makeshift barrier failed, sisters and longtime Lumberton residents Janie and Linda Prevatte were found relaxing at their homes just south of the levee. With medication and other essentials already packed, they kept a close eye out for water. If they saw it, they planned to evacuate. Until then, they were staying put.

“We ain’t got nowhere to go,” Janie said.

It was unclear if either woman’s home had flooded as of Sunday evening.

Sunday’s rescue effort came a day after teams evacuated dozens of people from two trailer parks and a nursing home in Lumberton, according to a Cajun Navy Relief member who asked to be identified only by his first name, Tom. He and other volunteers sweeping neighborhoods Sunday said they expect things to get worse in Lumberton overnight and in the coming days. The Lumber River is expected to crest late Sunday or early Monday near the record height it reached—over 24 feet—in the wake of Hurricane Matthew.

Aaron Lee of Pinehurst came to Lumberton after assisting with rescues in New Bern, which was devastated by flooding starting last week.

“I hope that someday when I need help, somebody can come help me,” said Lee, 26. “You know what I mean?”