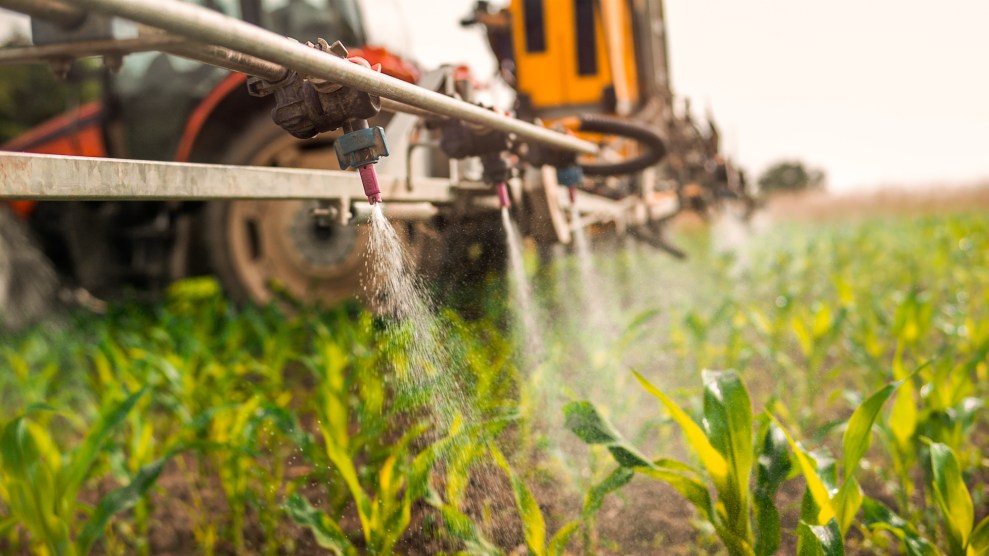 “There’s enough evidence that this chemical is harmful to children in households. Rural children, farmworker children deserve the same protections.”

Farmers use chlorpyrifos on crops ranging from corn to oranges to eradicate insects like termites and flies, but scientists and advocates have been pushing to ban it since the late 1990s. In 2000, the EPA forbade nearly all household uses of the toxin. Major studies have found evidence of the chemical’s risk on children’s health and brain development. And as my colleague Tom Philpott reported, last year, shortly after the EPA reversed course on banning the chemical, more than 50 farmworkers were rendered ill from exposure.

The latest petition, filed in 2007, argued the EPA should ban all uses of the pesticide, especially in regards to agriculture. “The petition was basically making the case that there’s enough evidence that this chemical is harmful to children in households” and “rural children, farmworker children deserve the same protections,” said Kristin Schafer, Executive Director of Pesticide Action Network North America, which filed the petition along with the Natural Resources Defense Council and other organizations, including several farmworker advocacy groups.

The EPA conducted a risk assessment in 2016 which determined that there was insufficient reason to doubt independent and internal scientific studies affirming the chemical’s risk, putting the agency on track to ban it. But under Pruitt, the EPA delayed the plan, citing a need for additional study, to be determined upon the pesticide’s registration review in 2022. (According to Schafer, the chemical would not have been approved upon review anyway, given that ample studies confirmed its harmful effects.)

“The court is very clear,” said Erik Olson, Senior Director of Health and Food at NRDC, referring to the 9th Circuit’s latest order. “The EPA had plenty of opportunity to finalize its decision.” When asked for comment, an EPA spokesman said the agency “is reviewing the decision,” and that data from Columbia University “remains inaccessible and has hindered the Agency’s ongoing process to fully evaluate the pesticide using the best available, transparent science.”

The company behind the pesticide, Dow Chemical, reportedly gave $1 million to President Donald Trump’s inaugural committee and has pushed the administration to delay its inevitable ban. In Olson’s opinion: The “EPA never changed its scientific view that this stuff needed to be banned—it just changed its political view that it didn’t want to do anything.”

Based on the language in the 9th Circuit Court’s decision, all uses of chlorpyrifos will be eliminated going forward. According to Olson, that extends from its use in food to its use in lawn maintenance (think golf courses).

Hawaii has already banned the pesticide, and PANNA is pushing for California to follow suit as soon as possible, rather than waiting even the 60 days for the federal ban. “The [California] Dept. of Pesticide Regulation has full authority to do this,” wrote Schafer in an email, “and two state scientific bodies have affirmed within the last year that chlorpyrifos poses a threat to public health.”

Both the NRDC and PANNA are keeping close watch on how the EPA will handle the exact process for eliminating the pesticide. “What [the] EPA will be negotiating and working out, theoretically, in the next 60 days, is whether they’ll allow existing stocks to be used up, which sometimes can be negotiated,” Schafer said.

Though chlorpyrifos usage is still widespread, some farmers were already looking for alternatives. From the Sacramento Bee:

“A lot of farmers are trying to find materials that are less harsh, less broad-spectrum,” said Joe Del Bosque, a prominent grower on the west side of the San Joaquin Valley. In addition, Del Bosque, who occasionally uses chlorpyrifos on his almond trees, said many farmers are concerned that using the same chemical repeatedly will make the insects more resistant to it.