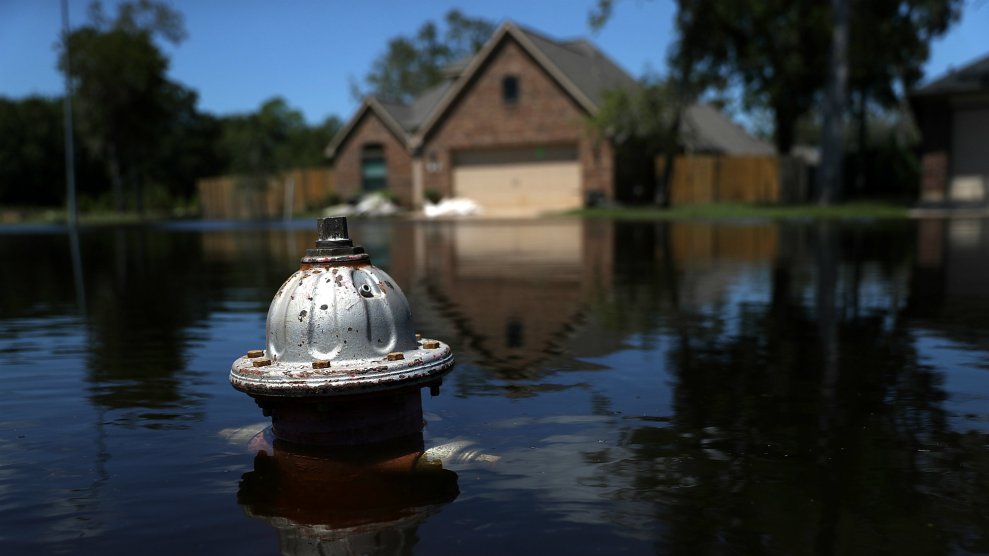 This story was originally published by the CityLab. It appears here as part of the Climate Desk collaboration.

August 25, 2017, is a date certain to be remembered as one of the worst in Houston’s history. But officials are hoping that August 25, 2018, will stand out as the day the city took a giant step toward securing its long-term future.

On Saturday, one year on from Hurricane Harvey’s landfall on the Texas coast, Harris County residents will decide whether to approve a $2.5 billion bond package that proponents say will deliver funds for crucial flood mitigation and prevention projects.

“This vote is one of the most important votes that the people of the City of Houston will cast,” Houston Mayor Sylvester Turner said at a press conference.

“We will not eliminate flooding, but we certainly can do everything we can to mitigate the risk of flooding. We must address our flooding infrastructure,” Turner said. “We cannot afford to wait any longer. We cannot afford to get this one wrong.”

There are 237 potential projects , including widening of bayous and channels, excavating stormwater detention basins, voluntary home buyouts, and engineering studies. The bond would not, however, pay for the construction of two big-ticket items on many wish lists—a third reservoir and a coastal barrier.

According to a University of Houston poll, 62 percent of respondents back the bond. Harris County Clerk Stan Stanart estimated that turnout will be about 7.5 percent of the electorate.

As part of its outreach effort, the Harris County Flood Control District held 23 community meetings over the summer, one for each watershed. At one, in a junior high school’s hall in suburban west Houston, residents pored over maps of the region’s complex hydrology, covered with boundary lines and symbols like red diamonds, green triangles and crosses, and purple circles.

At the school’s entrance, members of a newly formed flood-control advocacy group collected contact details from attendees. Barker Reservoir Flood Prevention takes its name from one of the two vast federally run reservoirs and dams in far west Houston that, while crucial to the city’s safety, also caused agonies during Harvey as the US Army Corps of Engineers made controlled water releases that flooded many homes along the Buffalo Bayou. Many homes built within the reservoir boundaries flooded as water pooled for days. (The reservoirs are normally dry, and mostly parkland.)

“Do we take real action or do we, as we say in Texas, act as an ostrich—stick our head in the sand, and hope it doesn’t happen again for 50 years?”

“We’re a world-class city with a world-class problem, and the world is looking at us right now to see how [we] respond to the devastation of Harvey. Do we take real action or do we, as we say in Texas, act as an ostrich—stick our head in the sand, and hope it doesn’t happen again for 50 years?” said Marlin Williford, the Barker group’s co-founder.

He was sitting on a bench at Exploration Park, a beautifully landscaped playground at the southwestern corner of the reservoir. As kids scaled climbing frames and gardeners tended to the foliage on this hot and sunny summer’s day, it was not easy to imagine what this area must have looked like during Harvey, when it was submerged in several feet of water.

That water will come back, eventually, and Bond supporters such as Williford feel a sense of urgency. The sooner plans are underway, the easier it will be to access federal matching funds. And as time passes and memories of the storm fade, it will get harder to persuade residents to spend heavily on reinforcing defenses.

Houston is the fourth-biggest city in the nation, with roughly 2.3 million residents, but the metropolitan area population is closer to 7 million. The explosive growth of the Houston area and Texas’s aversion to big government has created a multitude of municipal entities to oversee what, to someone driving along one of the area’s many freeways, might look like a continuous, homogenous sprawl. Viewed on a map, the City of Houston’s jagged limits look like something you might get if you asked a two-year-old to draw a square while blindfolded.

The watershed of the federally-managed Barker Reservoir encompasses parts of Fort Bend, Harris, and Waller counties and the cities of Houston and Katy. About 2 million people live in unincorporated areas of Harris County, where essential services such as drinking water, sewers, and drainage are often provided by hundreds of obscure, hyper-local and developer-friendly Municipal Utility Districts.

At least 68 people in Texas died as a direct result of Harvey, 36 of them in Harris County, according to the National Hurricane Center, which estimated the damage at $125 billion, making it the second-costliest US tropical cyclone after Katrina. The storm made landfall as a powerful Category Four hurricane roughly 200 miles southwest of central Houston, then stalled for four days, dropping a staggering 60 inches of rainfall in places. The NHC’s report from May estimates that Harvey flooded more than 300,000 structures and up to 500,000 cars in total. Since then, the federal government has allocated billions of dollars for hurricane relief and resilience; in July, officials announced $4.5 billion for flood prevention and mitigation for the region.

“We’re very much against increased taxes. However, there comes a time when you have great need. Harvey exposed great need in the flood-control systems throughout Harris County.”

If the Harris County measure, known as Proposition A, passes, a borrowing schedule over about 15 years will mean most homeowners see an increase of no more than 1.4 percent in their property tax, according to the district. (Disabled people, over-65s, and owners of homes worth less than $200,000 would be exempt from the increase.) Still, higher taxes are never an easy sell in Texas, especially since property rates have risen sharply for many in recent years.

“We’re very much against increased taxes. However, there comes a time when you have great need. Harvey exposed great need in the flood-control systems throughout Harris County,” Williford said.

The group advocates for improved capacity and conveyance in the region’s many channels and basins, so they can hold water in place and move it safely through populated areas.

With some members of Barker Reservoir Flood Prevention drawn from the oil industry—the reservoirs are in a district dubbed the Energy Corridor—there’s plenty of technical expertise available. But the group is also emphasizing old-fashioned people skills, networking to foster closer relations between local authorities in a region bigger than the state of New Jersey.

“Harris County has cooperated a lot with other counties, recognizing that what happens in other counties affects Harris County,” said Wendy Duncan, a Barker co-founder who recalls moving her furniture upstairs and piling into her car with her husband and their three kids and fleeing the storm as flood waters rose in her subdivision near the reservoir.

“I say this very cautiously, because I believe the bigger the government that you go, the more ineffective you are. But what we need is all these flood-control districts to collaborate with each other … and promote regional flood solutions.”

As Harris County pushes for $2.5 billion, neighboring Fort Bend County is taking a slower approach. In June, the county agreed to pay up to $3 million on an 18-month study before it asks voters to spend hundreds of millions of dollars on drainage improvements.

Meanwhile, a regionally minded campaign coalition of business and civic groups called Houston Stronger has produced its own eight-county plan—a much broader and more ambitious wish list—that it says would cost about $60 billion.

While greater Houston’s municipalities share a common interest in staying dry, they’re also competing with each other to preserve the factors that have made the metro area such a boomtown—its reputation as a low-tax, low-regulation environment where housing costs have remained comparatively affordable.

Harris County and the City of Houston passed tougher elevation rules for new buildings in 100- and 500-year flood plains. These new regulations are tougher than in many other parts of the region. But the city council’s decision in April was a narrow one, and the rules were fought by the Greater Houston Builders Association, which argues that tougher regulations risk stifling new development and increasing housing costs.

Jim Blackburn, an environmental law professor and co-director of the Severe Storm Prediction, Education and Evacuation from Disasters Center at Rice University, said he backs Proposition A, but Houston needs a more radical approach.

“Funding for projects that are essentially similar to projects that we’ve done in the past is, I would say, a first step, but it is not a huge step forward in terms of our thinking,” he said. “I think in general we lack an overall vision. This first year I don’t think has produced a definitive concept of what a flood-resilient Houston will look like.”

The bond money, he believes, isn’t enough to provide thorough protection in many flood-prone locations. “I think we’re going to have to buy out and remove a lot of housing from the flood plain areas,” he said. “We have accepted that we will have to buy out some, [but] I don’t think we’ve come close to realizing how large of a buyout that’s going to be required.”

The unusual devastation wreaked by Harvey—Houston’s third severe flooding event in as many years—was the result of several factors. The storm itself got “stuck” in place, so that it kept unloading rain over flat, low-lying Houston. Developers have spread concrete over much of the area’s prairie, which has limited its capacity to absorb and drain water. Most of the structures that flooded during Harvey sat outside the 100-year flood plain. And climate change makes future Harveys more likely.

“We have to give land to water. In the past, we always tried to banish water to concrete channels. Water has refused to stay in those concrete channels,” Blackburn said. “Our rainfall amounts are increasing; we have not come to grips with climate change … we’re not looking forward in terms of what it means in the next 10 years, the next 20 years.”

On the positive side, Blackburn said, Proposition A allows for millions of dollars to be available for voluntary buy-outs—a time-sensitive solution, since if owners are not bought out quickly, they are likely to stay put and may flood again. (The proposed bond projects include more than $700 million in combined federal and local funds to voluntarily buy out more than 3,500 buildings.)

If another Harvey happened right after the bond measure is approved, he said, “Would we have a similar amount of damage? Most likely. Would we be able to respond differently? You bet we could. That’s where that bond issue becomes so important.”