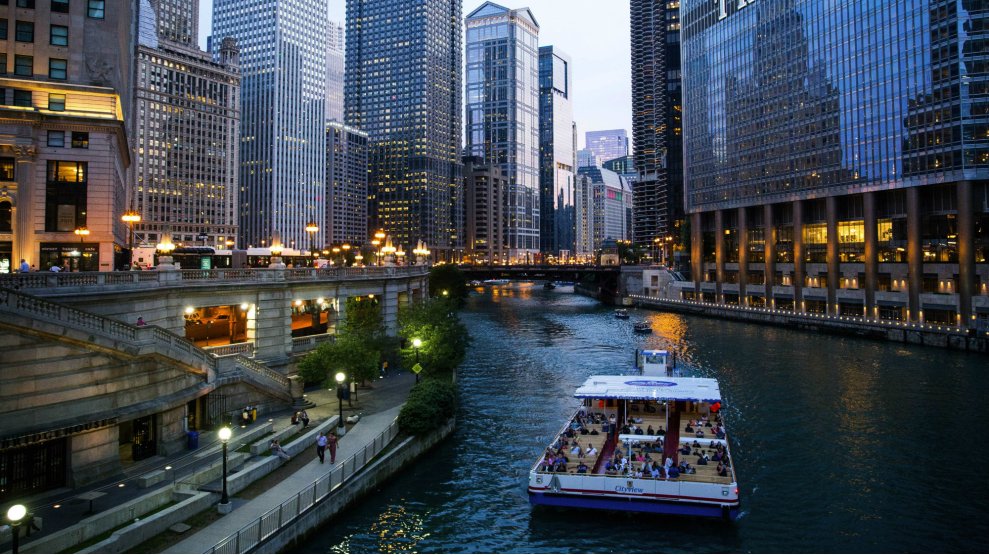 This story was originally published by the CityLab. It appears here as part of the Climate Desk collaboration.

If you can bypass the cheese display at the Goose Island Whole Foods in Chicago, there’s a strange sight out the building’s back doors. In the river below float 80 coconut-fiber beds, replete with native grasses, shrubs, and even river birch trees. Most days, you’ll also see Nick Wesley, co-founder of the nonprofit Urban Rivers, inspecting the beds from a kayak pulled up alongside.

The plants he’s tending are the beginnings of the Wild Mile. The initiative, led by Urban Rivers, aims to transform the steel-walled North Branch Canal of the Chicago River into a lush wildlife haven. Work began in June 2017 and will continue through 2020, when the area is planned to have forests, wetlands, and public walkways and kayak access points.

Since the waterway isn’t natural—the canal was carved and walled with concrete and metal for ships in the 19th century—there are no riverbanks to restore. So Wesley and his team opted for faux edges (which need anchoring, lest they float away). By 2020, Urban Rivers wants the canal to house birds, fish, trees, and mussels. To do that, it has to build a habitat almost from scratch.

Urban Rivers chose a particularly barren mile of water to populate. That’s the point—the project wants to draw attention to somewhat forgotten regions of the river. Like the rest of the river, it’s suffered from Chicago’s notorious sewage pollution. The North Branch Canal sits downstream of the O’Brien Water Reclamation Plant, which transformed into the world’s largest UV-light sanitation facility after the EPA demanded in 2011 that the river reach cleanliness standards that every other major US city managed years ago.

Although improving water quality has attracted more wildlife recently, the river is still regularly polluted, and it’s still not swimmable like the EPA wants it to be. Last year, Urban Rivers confirmed what kind of contaminants they’d be dealing with, Wesley said. “We looked into the water quality to see baseline what it is, and it’s not good.”

“We looked into the water quality to see baseline what it is, and it’s not good.”

The Wild Mile would like to turn that diagnosis around via the floating plants. Each island is produced by Biomatrix, a company that has supplied similar garden rafts to water clean-up efforts around the world. Plants are embedded in the coconut-fiber bed as if it’s normal dirt, but their root systems reach into the water below to suss out nutrients. The plants also take in, store, and break down pollutants.

If all goes according to plan, grasses and trees will provide habitat for land species, roots below will welcome aquatic ones, and the entire system will remove water toxins and encourage even more biodiversity to move in.

So far, the garden is doing okay. Urban Rivers expected about 80 percent of the plants, hand-chosen by the Chicago Botanic Garden’s Peter Nagle, to survive a year. The result has been closer to 95 percent, with the dryer-habitat grasses growing their roots sideways so they don’t take up as much water.

Wesley and his team even ventured into agricultural varieties for a season. Lab analysis of the basil, strawberries, tomatoes, and squash all deemed the plants edible. (“The strawberries were … the tastiest I’ve ever had, and I’m not even saying that to shill them,” said Wesley.) The only edible plant that didn’t pass muster was the kale, which had lead in it.

“The strawberries were … the tastiest I’ve ever had, and I’m not even saying that to shill them.”

Though it wasn’t safe to eat, the kale did what plants are supposed to do in this setting, explained Wei Zheng, a senior researcher at the Illinois Sustainable Technology Center who focuses on pesticides and hazardous chemical pollution. Plants in or near contaminated water absorb and hold onto contaminants that can’t be broken down any further, like lead and other heavy metals. Ideally, the greenery gets harvested before it dies, so it doesn’t degrade and release pollutants back into the same system. Contaminants from pharmaceuticals can be broken down by foliage, too, but since they’re likely degraded, it isn’t as important to keep them from returning to the water.

Rivers, however, are an unusual setting for plant-based water sanitizing, which normally happens in stagnant ponds or marshes. “Plant uptake and degradation take time,” Zheng said, and fast-moving rivers might not give roots enough of a chance to suck up pollutants. Though, he added, it’s possible the islands slow the current, and it’s clear at least one vegetable got the job done.

There’s also a size limit to what pollutants most roots can take in: Bacteria and viruses are too large, said Zheng. Harmful bacteria plague the Chicago River regularly because heavy storms still send sewage runoff into the river. Wesley hopes the plants’ root systems will foster healthy microbial communities that will make it harder for influxes of E. coli and other bugs to take hold.

The floating plants can’t do everything, but there are people outside Urban Rivers who thinks this installation will do the river some good. The Shedd Aquarium has collaborated on the project with submerged platforms abutting the recycling facility across the water. These rafts will experiment with growing lilies, mimicking the sometimes wet, sometimes dry patches of shore on a normal river edge.

Monarch butterflies have already found the milkweed; otherwise, the islands have yet to be inundated with insects and animals desperate for a river home. But Wesley is patient. Urban Rivers has a legion of kayaking volunteers and students who help keep track of which and how many species appear, and Wesley seems confident they will meet their goal of more than 5,000 islands, supporting everything from bacteria to entire trees. “You can’t just buy a great blue heron and expect it to stay somewhere. You have to really foster a really intricate ecosystem,” he said.

Of course, building that habitat might be easier if the pollution stopped flowing. “The best way to prevent contamination is to not put contamination in the river,” as Zheng put it.