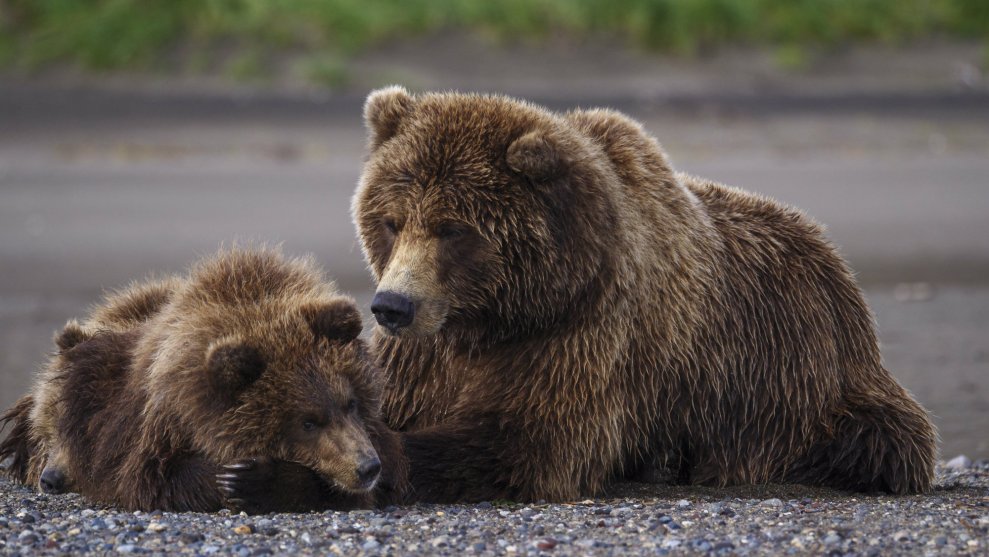 The brutal scene unfolded in 30-second snapshots, captured in discrete moments by a motion-activated camera. Two hunters skied toward a den on Esther Island in southern Alaska and found a sow and its two newborn bear cubs. After killing all three with rifles, the hunters packaged meat from the mother in game bags, leaving the dead cubs in the snow. Two days later, they returned to retrieve the shells from their weapons and hide the cubs’ bodies.

The April 14 slaying, detailed in police reports and the Anchorage Daily News, outraged activists and environmental groups who have long protested the state-sanctioned killing of bears and wolves through extreme means. The two hunters in Esther Island were charged with breaking anti-poaching laws and hiding evidence, but Alaskan hunters have long resorted to shooting these animals from helicopters and butchering them in dens without legal consequence. Not even research subjects for government studies are spared from the dramatic rise in predator killings. The three bears on Esther Island were part of a US Forest Service study, and the sow wore a collar identifying it as a research subject. Between 2005 and 2015, hunters killed 90 wolves wearing similar collars.

“Some component of the population here derives great ego gratification out of killing wolves and bears,” says Rick Steiner, a retired University of Alaska professor and board member at Public Employees for Environmental Responsibility, an advocacy group. “There is this strong undercurrent of an anti-predator cult—almost a pathology—here in Alaska.”

“Some component of the population here derives great ego gratification out of killing wolves and bears.”

Just a month after the incident on Esther Island, the National Park Service announced its intention to rescind an Obama-era rule that restricted extreme hunting practices on Alaskan national preserves.

“I join countless Alaskans in welcoming this announcement, which begins the necessary process of reversing an unlawful regulatory action by the National Park Service and restoring the unique management relationship between Alaska and the federal government,” Sen. Dan Sullivan (R-Alaska) declared at the time.

Not all Alaskans were pleased by this announcement. But it is one example of how, in its fight to bolster the the rights of hunters to kill bears and wolves, Alaskan wildlife officials have found no greater ally than the Trump administration. For decades, predator hunting has been a fiercely partisan issue and fodder for several legal challenges and protests. The state government enshrined a law in 1994 that directs the Alaska Board of Game to maintain the populations of deer, moose, and caribou, which critics say thrill seekers have interpreted in bad faith as a justification for butchering bears and wolves. The Obama administration finally became involved after the predator population in Alaska plummeted. An ecosystem with few predators hurts the ecological quality of local habitats, government researchers concluded in a 2014 report that used, as an example, the state’s Forty-Mile Caribou Herd, where expansion in the past decade has produced nutritional stress.

From 2005 and 2015, the Alaska Board of Game ignored over 50 requests to “limit” the hunting of carnivores on national preserve land. Eventually, the Park Service opted for a sterner approach and expressly prohibited practices such as killing wolves in their dens or shooting caribou from boats.

The election of Trump, a lifelong city dweller who has called trophy hunting “a horror show,” may not have boded well for hunters, but for the intervention of Interior Secretary Ryan Zinke, whose office includes a knife collection and grizzly bear mounted on his wall, and P. Daniel Smith, the acting Park Service director, who once lobbied for the National Rifle Association. (Trump’s sons, Eric and Donald, Jr., are also avid hunters.) Zinke has pushed through several rules benefiting hunters, including a repeal of Obama’s ban on importing elephant trophies from Zimbabwe and Zambia.

One of Zinke’s first decisions as Interior Secretary cemented his preference for the views of hunters and sportsmen over scientists. After he refused to engage in a single meeting with the scientists and ex-lawmakers on his National Park System Advisory Board, 10 of 12 members resigned. As Mother Jones reported in March, in their absence, Zinke convened an “International Wildlife Conservation Council,” composed of gun industry representatives, a former beauty queen, and a safari hunting enthusiast who hosts a reality-TV show. “It’s really embarrassing,” Masha Kalinina, the international trade policy specialist for the wildlife department at the Humane Society International, told Mother Jones. “I just question the qualifications of each and every one of these people.”

“It’s really embarrassing. I just question the qualifications of each and every one of these people.”

Republicans in Congress further boosted the Trump administration’s efforts last March when they voted to roll back Obama-era hunting regulations that applied to 77 million acres of Alaskan wildlife refuges. The Park Service’s recent proposal—which rolls back virtually the same regulations but applies them to about 20 million more acres of federal land—has garnered a particular kind of outrage from lobbyists, wildlife enthusiasts, and Democratic lawmakers who all flooded the NPS with more than 41,000 public comments. More than 60% of Alaskans said they opposed a rollback of the 2015 Park Service rule, according to a poll conducted by the Humane Society in June.

Despite this wellspring of support, the Park Service will almost certainly formalize its proposal after the public comment period ends next month.

What follows will undoubtedly be a virulent lobbying campaign and a flurry of legal challenges. Already, groups like the National Parks Conservation Association have drummed up support online through a petition and colorful social media campaign that documents how hunters can bait bears with bacon grease and donuts. “Bear baiting,” or the practice of fattening bears with high-calorie food as bait, is banned in most states and criticized for conditioning animals to enjoy human food, which increases the likelihood of an attack. (Defenders note the frequency of this practice is hardly commensurate with the level of outrage that accompanies it. “You’d be hard pressed to find these methods going on in the preserves,” Rod Arno, executive director of the Alaska Outdoor Council, an association of outdoor clubs, told NBC News in June.)

Brian Litmans, a senior staff attorney at Trustees for Alaska, told Mother Jones that the Park Service may be exceeding its power under the agency’s own management policies, which state that NPS does not reduce the amount of predators “for the purpose of increasing the numbers of harvested species” on federal land. Any legal challenge will be a long shot, given the nearly identical rollback Congress assented to last March.

For hunters, the years-long battle pits falls into the familiar debate over the competing powers of state versus federal authorities—except this time the federal bogeymen left office with Obama in 2017. Only the old regulations remain and Trump’s Interior Department and allies in Alaska will not lose much time in dispensing with them. “Bureaucrats and anti-hunting influences should not determine what’s ethical in Alaska,” Bruce Dale, director of the state Division of Wildlife Conservation, told NBC News. “In these populist times, it’s hard for people to understand different cultures and traditions. I think people should step back and try to understand.”

When the Park Service formalizes the rollback of a 2015 rule, it is unlikely to draw much attention. It will be only one of a legion of Obama-era regulations that Trump administration has been rescinding at a blistering pace. (Most recent was Obama’s signature Clean Power Plan last week.) For extreme hunting regulations to get any attention, advocates will need the support of non-hunters, as ex-Obama officials Jon Jarvis and Dan Ashe wrote in the Washington Post last month. “The legacy of the ethical hunter is on the line. A nation of mostly non-hunters is watching. Will they see our community stand proudly and loudly for humane, scientific and ethical policy? Or will they see the opposite?”