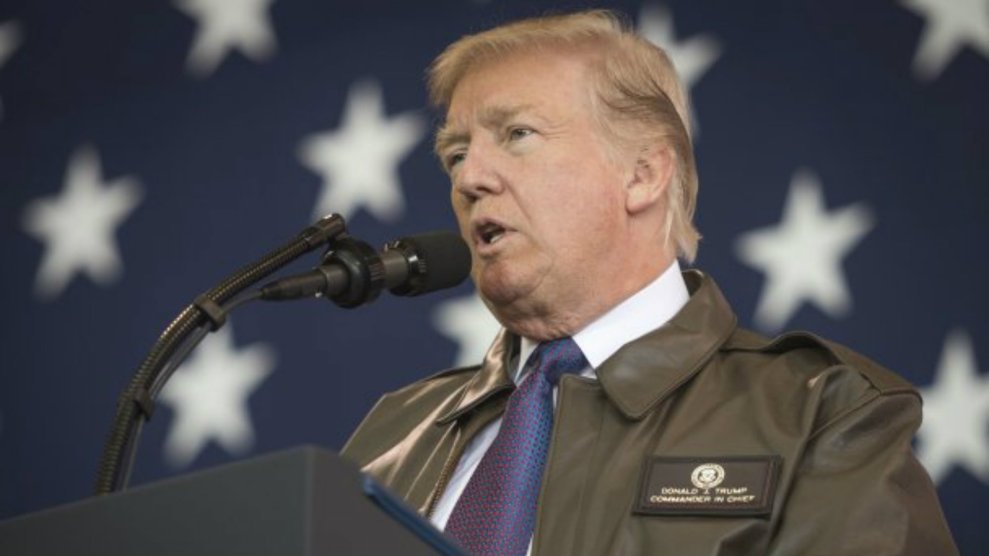 The Trump administration feared it would be a “public relations nightmare”: a major federal study that concluded contaminated groundwater across the country, especially near military bases, was more toxic than the government realized. Political aides to President Donald Trump and Environmental Protection Agency head Scott Pruitt pressured the Agency for Toxic Substances and Disease Registry against releasing the results.

“The public, media, and Congressional reaction to these numbers is going to be huge,” an unidentified White House aide wrote, according to Politico. “The impact to EPA and [the Defense Department] is going to be extremely painful. We cannot seem to get ATSDR to realize the potential public relations nightmare this is going to be.” The study was not released.

That is, until Wednesday. Amid a media firestorm about the administration’s immigration policy, the ATSDR—a division of the Department of Health and Human Services—quietly published its 852-page review of perfluoroalkyls, or PFAS, which are “used in everything from carpets and frying pan coatings to military firefighting foams,” according to ProPublica. “All told, the report offers the most comprehensive gathering of information on the effects of these chemicals today, and suggests they’re far more dangerous than previously thought.”

These chemical compounds pose health risks to millions of Americans. They’re in roughly 1 percent of the nation’s public water supply, according to the EPA; in roughly 1,500 drinking water systems across the country, according to the Environmental Working Group. People who drink from these systems, even if their exposure to PFAS is low, now have a potentially increased risk of cancer; of disruptions in hormones and the immune system; and of complications with fetal development during pregnancy.

But military personnel and veterans are particularly at risk, because PFAS compounds are in fire-fighting foams, which have been used in training exercises at military bases across America since the 1970s. Those foams have leached into the groundwater at the military facilities, and often the drinking water supply. Nearly three million Americans get their drinking water from Department of Defense systems.

The DOD has reported widespread contamination at its bases and posts, as well as their surrounding areas.

The DOD has reported widespread contamination at its bases and posts, as well as their surrounding areas. In a March report to the House Armed Services Committee, the department provided a list of 126 military facilities where nearby water supplies contained PFAS levels above the EPA’s standard, and 36 bases with drinking water contamination on site. “In all, 25 Army bases; 50 Air Force bases, 49 Navy or Marine Corps bases and two Defense Logistics Agency sites have tested at higher than acceptable levels for the compounds in either their drinking water or groundwater sources,” the Military Times reported.

The EPA had been assuring people who lived on these bases that they were safe from the potentially harmful effects of PFAS—which range in severity from weight gain to liver disease to cancer—at levels of 70 parts per trillion. But the new ATSDR study says safe levels were actually much lower, from 7 to 11 parts per trillion.

“It’s pretty pervasive problem,” Melanie Benesch, a legislative attorney at the Environmental Working Group, told me. “It’s getting into the groundwater and tap water on bases, so people living on base are of course affected.” Military personnel often live on bases with their families, so those drinking contaminated water can include pregnant women and children—two populations especially vulnerable to PFAS. And these compounds can remain in the body for six to ten years. “Veterans who have since moved off likely continue to have it in their bodies,” Benesch said.

In 2016, the Grand Rapids Press spoke to several veterans who blamed various health problems—spinal defects, thyroid problems, and hypertension—on PFAS-contaminated water at Wurtsmith Air Force Base. They began connecting the dots when, that February, Michigan officials warned against consuming well water near the facility due to the presence of the compounds. “We thought that if anything was wrong, of course someone would tell us,” one veteran said. “It feels like we’ve been betrayed.”

“We thought that if anything was wrong, of course someone would tell us,” one veteran said. “It feels like we’ve been betrayed.”

Since becoming aware of PFAS contamination, the DOD has “shut down wells, provided alternate water sources, or installed water treatment systems” at 11 military installations, according to a 2017 report from the Government Accountability Office. But despite that progress, “the pace of actual cleanup has been quite slow,” the Berkeley School of Law said in a report cited by the Center for Public Integrity. “Most of the time and money has been spent studying the problem,” the report added.

That time and money is wasted when those studies are delayed unnecessarily, Benesch said. “It was ready six months ago,” she said. “Six months that the government agency responsible for setting these levels, for doing the toxicology, was not able to provide us with their findings.” Providing the study earlier would have forced the EPA to consider changing its regulations sooner, Benesch said. Had parents and pregnant women on military bases known about the study, perhaps more of them would have avoided the tap water.

What, then, did the study’s temporary suppression achieve for Trump and Pruitt? It bought some time for the chemical manufacturers that support them, so they can prepare for the inevitable onslaught of personal injury lawsuits related to PFAS contamination. It also delayed public pressure to increase government spending on environmental cleanups at military bases and on updating rural water infrastructure. But the study’s delay may not have achieved what Trump and Pruitt most wanted it to. Let the public relations nightmare begin.