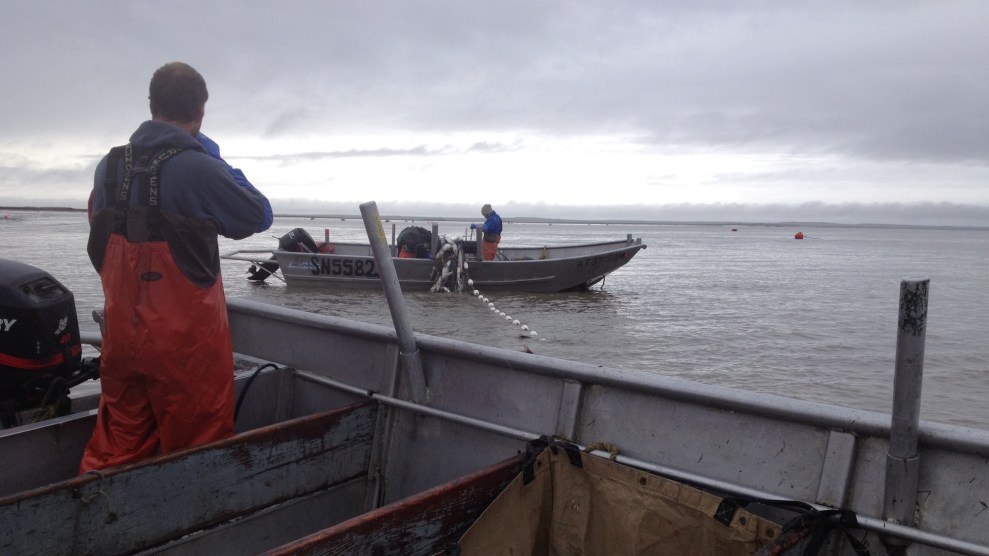 Fishermen from the Iliamna Fish Co. set nets at the mouth of the Kvichak River in Bristol Bay off Graveyard Point, Alaska.Paul Greenberg

July 4 marks the peak of the largest, most valuable wild salmon run left in America.

The sockeye salmon migration into Bristol Bay, Alaska, can exceed 40 million fish. As they charge into the Kvichak and Nushagak rivers and fan out across myriad tributaries, the sockeye and four other species of Pacific salmon are pursued by commercial and sport fisheries valued at over half a billion dollars. When they reach the region’s clear, wild headwaters, those millions of salmon spawn and produce billions of offspring that then find their way down into Iliamna, Alaska’s largest lake. Then the fish head out toward the Bering Sea, get big and fat on omega-3-rich krill, and in three more years return to their headwaters to begin the cycle anew. Whether marketed to Americans or exported to other countries, Bristol Bay salmon are a major bulwark against America’s “seafood deficit,” which in 2016 exceeded $14 billion.

The former Republican majority leader of the Alaska Senate told me a few years back while flying over the Pebble deposit, “You couldn’t pick a better place to ruin both drainages.”

In spite of all this, Environmental Protection Agency Administrator Scott Pruitt has been stewarding the resurrection of a project that poses a significant threat to the region’s lucrative fisheries. The Pebble Mine project, first proposed by Cominco Limited in the late 1980s, focuses on a deposit containing billions of tons of copper, gold, and molybdenum in the very same headwaters where all those salmon get their start. Located in a seismically active region high in sulfur, salmon advocates believe the proposed mine and associated infrastructure would dangerously contaminate the Nushagak and Kvichak river systems. As Rick Halford, the former Republican majority leader of the Alaska Senate, told me a few years back while flying over the Pebble deposit, “You couldn’t pick a better place to ruin both drainages.”

There has been a good deal of back and forth over the strike in the last decade, but it now seems we are reaching a critical moment, where the mine may finally move forward or be scrapped once and for all. As we head toward the second July 4 of Pruitt’s tenure, it’s worth going back over the last few years of the mine’s history and tracking his steps. While the embattled administrator attempts to dance between wealthy pro-fishing donors on the one hand and mining lobbyists on the other, the mine remains a significant pebble in his shoe.

Summer 2014: After intense lobbying from Alaska Natives, fishermen, and conservationists, including the Bristol Bay Native Corporation, the Natural Resources Defense Council, and Trout Unlimited, the Obama administration initiates something called a 404(c) action under the Federal Clean Water Act. A 404(c) authorizes the EPA “to prohibit, restrict, or deny the discharge of dredged or fill material at defined sites in waters of the United States…whenever it determines, after notice and opportunity for public hearing, that use of such sites for disposal would have an unacceptable adverse impact on one or more of various resources, including fisheries.” The groups hope the action will kill the mining project because of its threat to the fish, and are hoping for a final decision before former President Barack Obama leaves office. In the meantime, the Pebble Partnership loses three of its four investors: Mitsubishi, Anglo-American PLC, and Rio Tinto.

Fall 2014: The Pebble Limited Partnership—which by this point consists of only one partner, the Canadian mining company Northern Dynasty—sues the EPA over the 404(c) process, in part because Northern Dynasty argues it contravened federal rules. The case gets stuck in discovery and the lawsuit lingers until 2017. The Clean Water 404(c) action is never finalized.

May 2017: After the election of Donald Trump for president, Pruitt, the new EPA administrator, meets privately with Pebble CEO Tom Collier and lobbyists. Shortly after the meeting, he agrees to settle Pebble’s lawsuit, and puts the unfinished Obama 404(c) on hold until the end of the first term of the Trump administration. In a May 12 press release, Pruitt frames the suspension of the Clean Water action as a matter of “fairness.” “We are committed to due process and the rule of law,” he writes. “The agreement will not guarantee or prejudge a particular outcome, but will provide Pebble a fair process for their permit application and help steer EPA away from costly and time-consuming litigation.”

January 2018: After more than 1 million public comments and considerable pressure from Bristol Bay stakeholders, some of it from high-level Republican donors, Pruitt seems to conclude that abandoning the 404(c) entirely is a liability. On January 26, the EPA issues a press release with a confusing header: “Administrator Scott Pruitt Suspends Withdrawal of Proposed Determination in Bristol Bay Watershed.” In other words, Pruitt decides not to abandon the Obama-era EPA 404(c) action, and even chooses to echo much of the language of the anti-Pebble campaign when he says, “It is my judgment at this time that any mining projects in the region likely pose a risk to the abundant natural resources that exist there. Until we know the full extent of that risk, those natural resources and world-class fisheries deserve the utmost protection.” Could the fact that Robert Gillam, a longtime Pebble opponent, contributed $250,000 to Trump’s Victory Fund have changed the administrator’s mind?

March 2018: In a seemingly direct contradiction to Pruitt’s “judgment,” the Army Corps of Engineers begins the early phases of an Environmental Impact Statement (EIS). The timeline for completion of the EIS is two years, a notably short period for analysis for any mine in Alaska, much less one of this size. The Corps also announces an unusually short one-month call for public comments during the scoping phase of the EIS.

“It is my judgment at this time that any mining projects in the region likely pose a risk to the abundant natural resources that exist there,” Pruitt wrote.

Alannah Hurley, the executive director of the United Tribes of Bristol Bay, notes that compared to earlier public comment periods, this one is highly compressed, and translators were not being made available for local tribes to participate in testimony. Tim Bristol, of the SalmonState initiative, confirms that hearings are not held in communities downstream of the Pebble site, and that live microphones are not allowed in politically important centers like Dillingham, Homer, and Anchorage. “I was in Homer,” Bristol writes, “no public testimony. Same with Anchorage. You could sit at a computer or go have a private interview with the Army Corps of Engineers.”

April 6, 2018: The Corps agrees to extend its comment period to June 29, 2018 (this Friday), after another major public outcry, though it maintains the need for a two-year EIS. Meanwhile, a “Stand for Salmon” petition circulates within Alaska, gathering nearly 50,000 signatures. The petition is submitted to the Alaska Division of Elections in support of having a “Yes for Salmon” ballot initiative appear in the November general election. If passed, the ballot would give Alaska’s state agencies the authority and legal backing needed to reject Pebble-like projects. Because the Pebble site is on state land, this would be critical should Alaskans seek to block the mine.

May 2018: Pebble submits a memo to the Corps outlining changes to its December 2017 mine plan, increasing the amount of mined material by 25 percent. Weeks later, on May 25, First Quantum Minerals Ltd. terminates its option agreement with Pebble and leaves a more than $30 million investment on the table. First Quantum is the fourth investor to leave the Pebble project. The company’s departure raises doubts about whether Pebble Partnership’s lone partner, Northern Dynasty, has the capital needed to see the project through the permitting process.

So, what’s next? Where does Pruitt stand on all this going forward? The Trump administration has taken unprecedented steps to open national monuments to oil drilling, mining, and even fishing. But in this case, Pruitt is facing outdoor enthusiasts and a big fishing industry on one hand and a mining venture on the other—all of which include enthusiastic Republicans. On a conference call hosted by conservative legal group the Federalist Society, Pebble’s CEO Tom Collier said he was “riled up” over Pruitt’s waffling and urged him to address “federal overreach” like he’d promised. Both the mining and salmon camps are clearly wondering where Pruitt stands.

Pruitt is facing outdoor enthusiasts and a big fishing industry on one hand and a mining venture on the other – all of which include enthusiastic Republicans.

Still, the Pebble project moves ahead “zombie-like,” as Christopher Solomon recently described in an op-ed for Outside magazine. How this will play out will depend on a combination of factors: Will a new investor bail out Northern Dynasty and fill the $150 million hole left by First Quantum’s departure? Will Sens. Lisa Murkowski and Dan Sullivan intervene? So far, they have tiptoed around the issue.

Will the public comment period to the Army Corps of Engineers yield the same quantity of overwhelmingly negative anti-Pebble comments as previous public comment periods? In the Trump era, will the Corps even care? And, barring any progress with federal authorities, will the “Yes for Salmon” initiative appear on the ballot for November and result in updates of Alaska’s salmon habitat laws and make Pebble-like projects legislatively untenable? Or will it be struck down in the Alaska Supreme Court when it makes its ruling on the issue in September?

For the moment, the zombie keeps walking, the salmon keep swimming, and Pruitt still has that pebble in his shoe.

Update, June 27: EPA Administrator Scott Pruitt released a memo to change regulations governing his agency’s authority under the Clean Water Act. The directive would prevent the EPA from intervening in the permitting process for projects before a permit has been filed with the US Army Corps of Engineers or the state, as well as after a permit has been issued. The memo “takes direct aim at the authority the agency used in 2014 to block construction of a massive gold and copper mine near Alaska’s Bristol Bay,” the Washington Post reported.