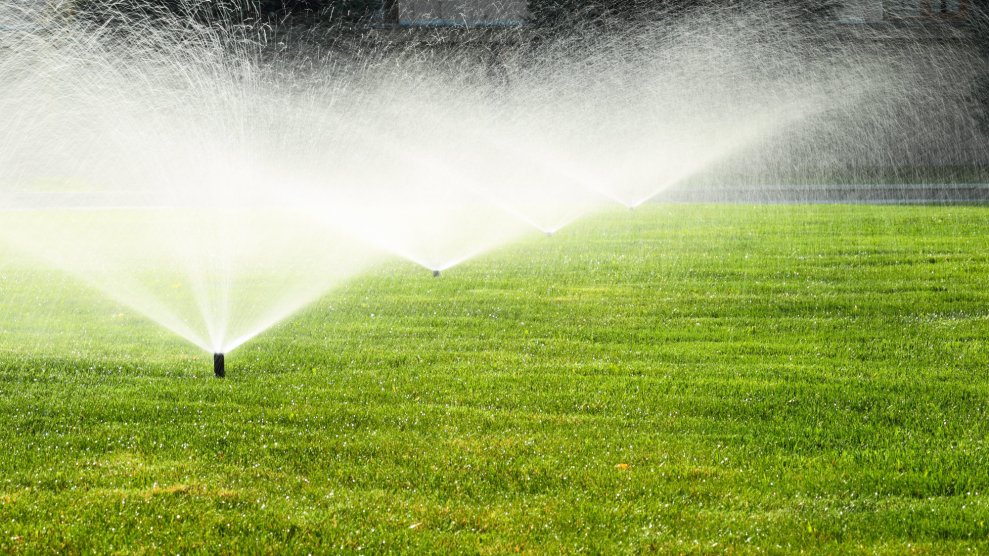 Utah is one of the driest states in the country, but you couldn’t tell by how much water its residents are using. The average American uses between 80 and 100 gallons a day. In Utah, each individual consumes approximately 248 gallons of water a day.

Are they taking exceptionally long showers? Even that would not explain the excessive use of water, which is, in fact, the result of an unusual combination of biblical prophecy and Utah history. The Mormons of Utah—who account for more than 60 percent of the state’s population—have long been determined to transform the desert and fulfill the prophecy of Isaiah 35:1, which states that “the wilderness and the solitary place shall be glad for them; and the desert shall rejoice, and blossom as the rose.” For Mormons, this holds a deep meaning. “It’s seen as a prophecy to be fulfilled in the last days,” says Brian Cannon, a historian specializing in Utah at Brigham Young University. “Their efforts to reclaim the desert land and their success has divine approval.”

The use of water in Utah roughly breaks down this way. Municipal water use only accounts for 16 percent of the state’s water usage; agriculture makes up the rest. But 72 percent of municipal water is used outdoors—watering residential lawns, the greenery at government institutions and schools, and golf courses. By contrast, outdoor water use by the 4 million customers served by the Los Angeles Water and Power Department is 40 percent.

Utah’s overconsumption of water is partly because water is cheap, and in many municipalities, users pay flat rates for it. Most comparable municipalities use a tier structure, so those who use less water have lower water bills, but not so in Utah. According to the Utah Rivers Council, residents of St. George pay about $1.20 per thousand gallons once they’ve reached 5,000 gallons of water. When they reach the threshold of 30,000 gallons, that number only increases by 43 cents. Las Vegas water users pay $4.72 per thousand gallons for 30,000 gallons of water.

“There’s this idea that water leaving Utah in a river, or water entering the Great Salt Lake, is wasted because man is not using it. It’s sort of like Manifest Destiny.”

The state’s practice of subsidizing water with property taxes offers no incentive for limiting its use. When water experts and those concerned about conservation talk about using less water, there is swift pushback from legislators and water suppliers. “There’s this idea that water leaving Utah in a river, or water entering the Great Salt Lake, is wasted because man is not using it,” Zach Frankel, the executive director of the Utah Rivers Council, explains. “It’s sort of like Manifest Destiny.”

A sense of Manifest Destiny has been part of the deeply entwined history of Utah and the Church of Jesus Christ of Latter-day Saints. Mormons in Missouri and Illinois began looking for a new home in the mid-1840s after their leader, Joseph Smith, was assassinated in 1844, and neighbors became increasingly hostile over their practice of polygamy. Based on the recommendation of explorer and presidential candidate John C. Fremont, the Mormons headed for what would later become Utah, an isolated desert where they would be cut off from the rest of the world.

But the journey from the Midwest to the desert wasn’t an easy one. “They likened themselves to Israelites being led through the desert by the American Moses,” Cannon says, referring to Brigham Young, who was the president of the Mormon church from 1847 to 1877. Eventually, “Mormons invested in an effort in colonizing and reclaiming the area,” transforming the desert into a stable place where they could irrigate and grow crops. Soon, the region thrived.

St. George is one of the driest places in Utah and the seat of rural Washington County. Unlike the northern portion of the state, which is home to the Wasatch Mountains, St. George has no ski resorts. Just 120 miles from Las Vegas, the city gets less than nine inches of rain annually. But despite these conditions, St. George is a green and vibrant place, possibly due to the fact that water consumption there is between 289 to 325 gallons per person a day. Currently, that water comes from the Virgin River, a tributary of Lake Meade which is a reservoir on the Colorado River. The river, which is vital to 40 million people in seven states, is straining to keep up with demand.

But local leaders and water suppliers have convinced residents in southwestern Utah that there may be water shortages in the future—but not to inspire conservation practices. In 2006, state lawmakers passed legislation proposing a controversial pipeline that would bring more than 86,000 acre feet of water, which is 77 million gallons a day, to the southwest region of the state. The proposed pipeline, which is being managed by the Utah Division of Water Resources, will run 140 miles from Lake Powell, a Colorado River reservoir that straddles Utah and Arizona, to southwest Utah. It’s expected to cost $2 billion.

Proponents have argued that because the state’s population is expected to grow by half a million people by 2065, the pipeline is essential. “We’ve got to have that Lake Powell Pipeline in Washington County if we want to continue to grow,” state Rep. Mike Noel said at a luncheon with the Washington County Republican Women last year. “Maybe we’ll reach the vision of Brigham Young, and it’ll be like the Wasatch Front down here.” The Wasatch Front is the name for the population centers of Utah comprised of big cities including Salt Lake City and Provo. (In March, the Utah Rivers Council filed a complaint with the state attorney general alleging that Rep. Noel did not disclose his financial interests in the pipeline project.)

Environmentalists and water experts who oppose the pipeline disagree. “Utah is not running out of water,” Frankel said. The problem is that the rate of water consumption in the state is unsustainable. And as a result of climate change, studies have shown, winter snowfall will shift to rain. Right now, about a quarter of the water supply in the West relies on snowpack, which, in turn, melts and fills reservoirs. Scientists are also predicting that in the coming decades, flow from the Colorado River will decrease by 20 to 25 percent, meaning the river will shrink, giving those in the region no choice but to conserve water.

As cities and states in the West adjust policies and priorities to cope with climate change, Utah remains an outlier. The future of water conservation in Utah could also be at stake as some continue to attempt to make the desert bloom. But not everyone is on board with that project. “Not all Mormons see that linkage between water and biblical prophecy,” Cannon explains. “Many are wondering: Do we really need this much water?”