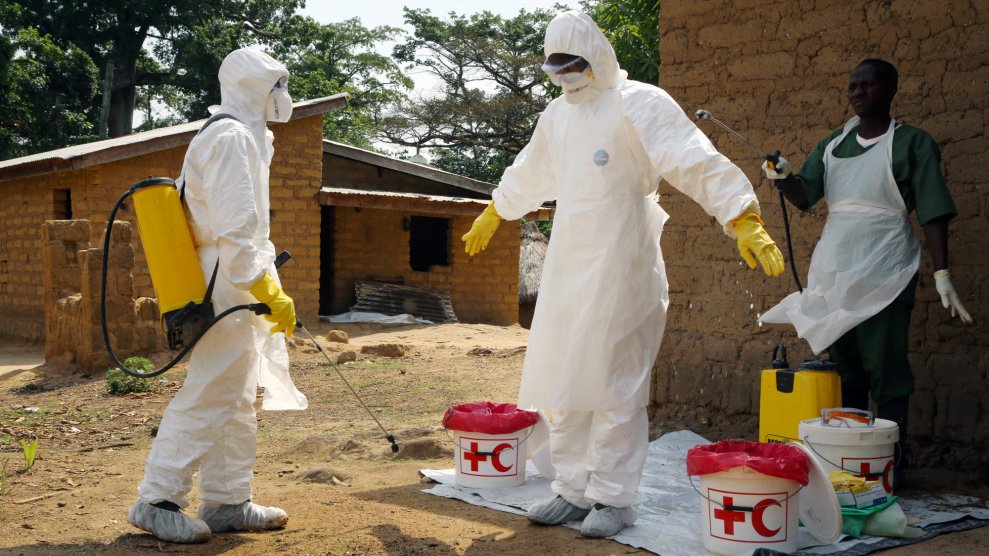 Health care volunteers are sprayed with bleach after removing corpses of Ebola victims in Koango, Guinea, in 2014. Idrissa Soumar/Planet Pix/ZUMA

Since Ebola was first discovered in the Democratic Republic of the Congo in 1976, outbreaks have largely been stopped with the same methods—isolating the sick, and wearing protective gear while treating them and burying the dead. This approach still puts health workers at risk of catching the deadly infectious disease, and has proven inadequate when Ebola spreads rapidly through large cities.

Now there’s a new weapon to fight Ebola. Health officials will for the first time use a promising experimental vaccine against an outbreak in the DRC. “This could be a real paradigm shift in how we respond to Ebola,” says Dr. Peter Salama, the World Health Organization (WHO) deputy director general of emergency preparedness and response. The DRC Health Ministry says vaccination will start as early as this weekend. If the vaccine successfully halts the outbreak, it could change how the world fights Ebola, and alleviate fear of the horrific disease.

On May 8, WHO announced that two Ebola cases have been confirmed in the DRC. As of Monday, a total of 39 possible cases had been reported, including 19 deaths. During an outbreak in the DRC last year, the country approved use of the experimental vaccine, known as rVSV-ZEBOV, but the outbreak was contained before the vaccine could be used. Since the vaccine is still not licensed, it will be given on the grounds of “compassionate use” to willing participants.

A first batch of 4,000 doses of the vaccine arrived Wednesday and another 4,000 doses are on the way. The drug company that owns the vaccine, Merck, is donating all the doses, according to a spokeswoman. Merck has an additional 300,000 doses stockpiled in the US.

While this will be the first time health officials use an Ebola vaccine as part of an initial response to an outbreak, the vaccine has been shown to be safe and effective. In 2015, near the end of the largest Ebola outbreak on record, the vaccine was tested in Guinea and Sierra Leone through a phase 3 trial. More than 5,000 people considered at risk of exposure received the vaccine immediately, and ten days later none of them tested positive for Ebola.

“This could be a real paradigm shift in how we respond to Ebola.”

Responders will treat people in the DRC through the same “ring vaccination” method used in 2015. Rather than vaccinating the entire population, they will try to vaccinate anyone who came in contact with an infected person, and then vaccinate those individuals’ contacts as well. WHO will also vaccinate health workers.

“We are planning initially on vaccinating 7,000 to 8,000 people,” Salama says, adding, “the more I look at the outbreak, the more I think we may we need to raise that number.”

There are many difficulties in deploying the vaccine around Bikoro, the remote area in the northwest of the DRC where the outbreak was first reported. To protect the vaccine’s effectiveness, it must be kept between minus 76 and minus 112 degrees Fahrenheit. “You can imagine a place like Bikoro where there is not even electricity this is very, very challenging,” Salama says.

The first batch of #Ebola vaccines are now in a warehouse in Kinshasa, #DRC. Vaccines need to be properly stored within an efficient cold-chain. The doses were received by the Minister of Health @OlyIlunga pic.twitter.com/8Tg2fqWt9L

The rVSV-ZEBOV vaccine has been decades in the making. It was developed in the early 2000s, back when Ebola was not part of the average American’s vocabulary. In 2005, scientists from Canada and the United States reported in a respected journal, Nature Medicine, that they had created vaccines that were 100 percent effective in protecting monkeys from the Ebola virus, and a related virus called Marburg. “That’s the paper that made everyone realize this was a serious contender,” one of the lead researchers, Dr. Tom Geisbert, says. He estimated at the time that after one to two more years of researching the rVSV-ZEBOV vaccine in animals, it would be ready for basic safety trials in humans. But those trials didn’t come.

“We had these promising vaccines and they were just sitting there,” says Geisbert, who is now a microbiology and immunology professor at the University of Texas Medical Branch. Part of the reason for the stall was a lack of funding to fight the rare disease, which at that point had only infected up to a few hundred people at a time. “There just hasn’t historically been enough Ebola cases for a private company to make any profit,” he adds.

In 2014, that changed when an Ebola epidemic ravaged West Africa, eventually killing more than 11,300 people. Nonprofits and government agencies began to fund a flurry of research. That year, Merck bought the rights to the experimental Ebola vaccine Geisbert helped create.

When the vaccine is injected, it tricks the body into thinking it has been infected with Ebola and launching an immune response. “It’s kind of a decoy,” Geisbert explains. “Your body thinks it’s real Ebola and it’s not.” The vaccine is live, meaning it contains a replicating virus and can cause other reactions. “Killed” vaccines, with inactivated viruses, tend to be safer—and not work as well. “You can deal with a little muscle aches and pains,” Geisbert says, describing side effects some people reported. “I would rather have a headache than Ebola.”

It remains to be seen whether the vaccine will offer long-lasting protection from Ebola. The Ebola virus has four strains that cause disease in people. The rVSV-ZEBOV vaccine treats one of the two more common strains, called Zaire after the DRC’s former name. The Zaire strain was responsible for the 2014 epidemic as well as the current outbreak in the DRC. But to completely protect against future Ebola outbreaks, a vaccine would have to be effective against every strain—and no such vaccine has been fully tested in humans.

Merck says it expects to file a license for the vaccine with the Food and Drug Administration in 2019. Several other companies are also working on a vaccine, including Johnson & Johnson.

In the four decades since Ebola has been discovered, the main objective has largely been containing outbreaks of the disease and keeping the virus from spreading to another community, or country, WHO’s Salama says. “Now we have an equally important second objective, to be able to prevent and treat with our new technologies,” he says. “The message we are sending here is Ebola is not the death sentence it used to be.”