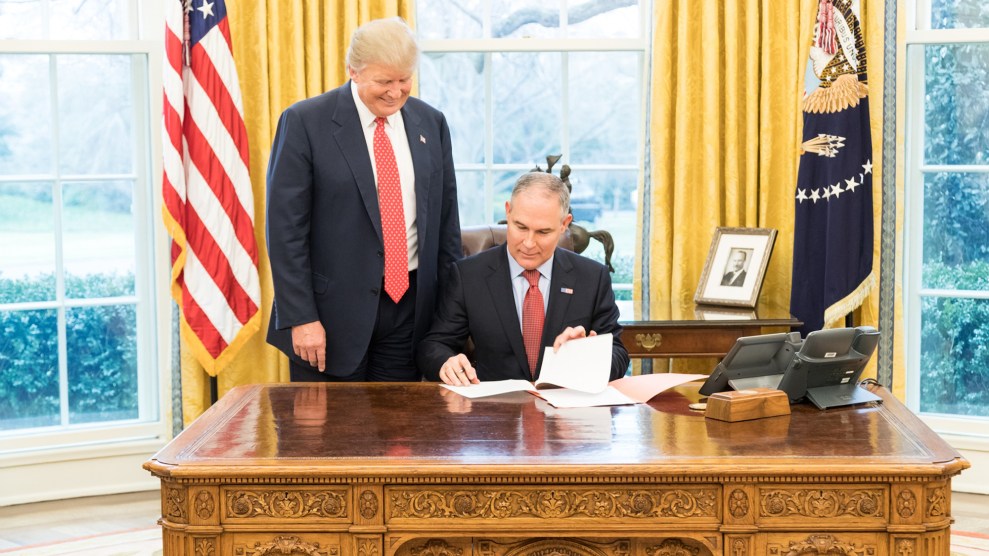 EPA Administrator Scott Pruitt has allies in high places who are not willing to give up on him after weeks of damaging stories. On Friday, President Trump took to Twitter to deny reports that he would replace Attorney General Jeff Sessions with Pruitt, and said that Pruitt is “under siege” by the media.

Do you believe that the Fake News Media is pushing hard on a story that I am going to replace A.G. Jeff Sessions with EPA Chief Scott Pruitt, who is doing a great job but is TOTALLY under siege? Do people really believe this stuff? So much of the media is dishonest and corrupt!

Despite Trump’s current backing, it’s unclear whether Pruitt will survive the storm. But Pruitt also has a safety net unlike Trump’s other embattled cabinet members: He’s a trusted partner in carrying out Trump’s campaign vision to reduce the EPA to “little tidbits.”

Pruitt’s allies have rushed to his defense as he faces mounting problems over his first 13 months at the EPA—controversies that have included lavish spending on his office furniture and expenses, reassigning and forcing out staff who criticize him, renting a condo from an energy lobbyist, and using a loophole in a clean water law to dole out pay raises to his staff.

A Wall Street Journal editorial published Thursday night called Pruitt the most consequential member of Trump’s cabinet, arguing “Mr. Pruitt’s real sin is that he is one of Mr. Trump’s most aggressive reformers, taking on green idols that others would bow before.” A similar line has been picked up by other conservative media and used by Rush Limbaugh and Sen. Ted Cruz (R-Texas). And the White House, including Trump, is certainly still happy with the bulk of what Pruitt has done at the EPA: “The president thinks that he’s done a good job, particularly on the deregulation front,” White House Press Secretary Sarah Huckabee Sanders told reporters earlier this week.

Pruitt has delivered a long set of easy wins for Trump. The EPA chief has rolled back dozens of regulations, curtailed environmental enforcement, and limited the role and quality of science in the agency’s decisions. There’s still more for Trump to celebrate this week: Pruitt rolled back Obama-era fuel efficiency standards and has adopted House Science Chair Lamar Smith’s (R-Texas) push to ban air pollution studies that rely on confidential data from being used in EPA regulation.

As I wrote in my profile of Pruitt earlier this year:

In an administration full of deregulators, Pruitt stands out, bringing to the EPA the anti-Washington playbook he developed with industry in Oklahoma. In December 2017, the White House trumpeted presidential accomplishments from Trump’s first year—a list dominated by handouts to the energy industry. Pruitt’s fingerprints were everywhere, from “exiting the Paris climate agreement” to “ending the war on coal.” It’s an agenda that taps directly into the right-wing populism that was integral to Trump’s success—and a corporate donor base that will be vital to Pruitt’s future.

Pruitt built his national reputation by advancing industry interests and setting himself up as a primary opponent to the Obama administration. And he has picked up powerful benefactors along the way, such as Oklahoman oilman Harold Hamm, who was Pruitt’s chair of his reelection campaign for state attorney general. Hamm, an oil-and-gas billionaire who made his fortune in hydraulic fracturing, is a donor to Trump.

“I think he’s made the bet that the fossil fuel industry will take care of him one way or another,” Sen. Sheldon Whitehouse (D-R.I.), a member of the committee that conducts oversight of the EPA, told me for my profile of Pruitt. “They reward obedience, and nobody has been more obedient than Scott Pruitt.”