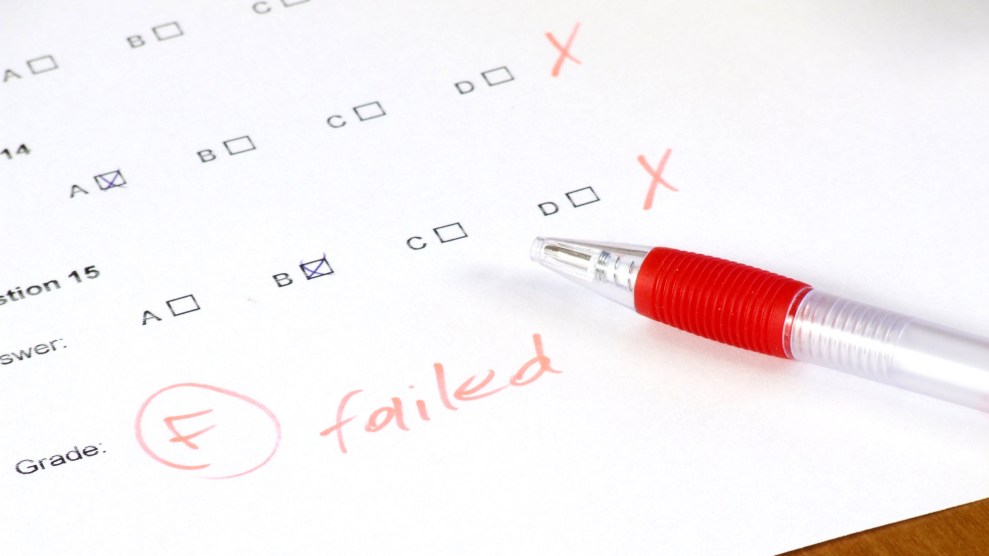 Congressional Republicans and Democrats have never been further apart on environmental issues. The top leadership in the GOP is comprised entirely of climate change deniers, while Democrats have aligned in opposition to President Trump’s agenda. But a report released today by the League of Conservation Voters (LCV) calibrates the distance between the two parties with some hard numbers.

The group has been calculating the performance by members of Congress for nearly 50 years by evaluating how each member votes on environmental legislation. This year, the Republican-controlled Congress had plenty of opportunities to show where they stand. LCV counted a total of 35 House votes and 19 Senate votes to overturn climate regulations, open up drilling on public lands, undermine the Endangered Species Act, and confirm a slew of Trump-appointed judicial and cabinet nominations.

All those votes resulted in single-digit failing scores for most Republicans. The Senate average of 1 percent is a historic low, while House Republicans pulled an average of 5 percent. Meanwhile Democrats in the House and Senate earned 94 percent and 93 percent, respectively.

Those are just party averages, and it’s worth noting just how many legislators are at the extremes, which tilts the scores: More than 100 Democrats, now leading the opposition to Trump’s deregulatory agenda, earned perfect scores, while the Republican average was dragged down by the 170 lawmakers across the two chambers who earned a zero.

But what about the Climate Solutions Caucus in the House, the growing bipartisan caucus whose 70 members (with 68 voting members) are equally divided between Republicans and Democrats? For some moderate conservatives and climate activists, the caucus represents the best hope in Congress for ever advancing climate legislation as long as Republicans hold power. One might expect the caucus Republicans to earn higher scores than their party overall, and technically they did score a bit better than their House peers. But their average 16 percent score is still a failing grade.

In fact, more than half of the Republicans on the caucus earned less than 10 percent (Florida Rep. Matt Gaetz, who once proposed a bill to abolish the EPA, is among them with 6 percent). Rep. Carlos Curbelo is co-chair of the caucus and represents the Miami area. He is generally considered a leader on climate change, but his score was 23 percent. One caveat is that many representatives from Florida missed a number of votes, due to the time they spent in their districts after Hurricane Irma—those missed votes may have affected their scores.

As Megan Jula and I reported:

[The Climate Solutions Caucus’s] critics charge the caucus has expanded its size at the expense of its credibility, providing Republicans who have been actively hostile to government programs a low-stakes opportunity to “greenwash” their climate credentials without backing meaningful action—just in time for midterm elections. In fact, many members may be vulnerable in the 2018 cycle; 24 of the 35 Republican members’ districts will be competitive races, according to an analysis of The Cook Political Report. Republicans in these races could benefit from distancing themselves from Trump’s climate change denial.

The exception is Rep. Brian Fitzpatrick (R-Pa.), who earned the highest of any Republican with 71 percent—a solid C-minus.

“It’s unfortunate that 71 percent is now such an outlier,” Sittenfeld notes, “because it used to be that a number of Republicans voted pro environment.”

Here’s LCV’s full report with a breakdown for individual members of Congress.