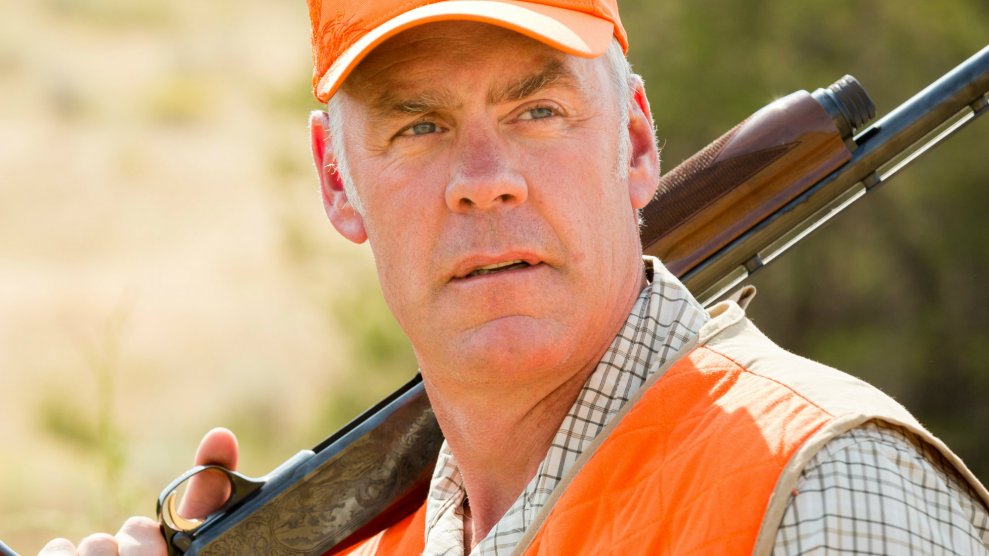 Department of the Interior

This story was originally published by the HuffPost and is reproduced here as part of the Climate Desk collaboration.

Interior Secretary Ryan Zinke is a shareholder in a private Montana company that manufactures and sells firearms and advanced weapons materials, a financial interest he did not disclose when nominated last year.

In response to inquiries from HuffPost, both Zinke and the company, PROOF Research Inc., confirmed the secretary’s holdings, though the dollar value placed on them varied. This previously undisclosed holding comes to light after numerous decisions in his first year in office that benefited the hunting and gun industries.

PROOF Research Inc. was first established in 2011 in Zinke’s hometown of Whitefish, Montana, under the name Extreme Precision Armaments Inc., according to state of Montana business records. The company specializes in the production of lightweight rifles with high-precision carbon fiber barrels for hunting and military applications and was born as a merger of four smaller firearms and gun parts companies. It later changed its name to PROOF Research Inc. and moved to the nearby town of Columbia Falls.

According to the company’s website, its facility in Columbia Falls produces “the world’s finest composite barrels, stocks, and complete rifles.”

According to the company’s website, its facility in Columbia Falls produces “the world’s finest composite barrels, stocks, and complete rifles.” A second facility in Dayton, Ohio, makes specialized high-temperature composite materials for the aerospace and defense industries, including components for the F-35 Joint Strike Fighter and B-2 stealth bomber.

Zinke provided consulting services for the company in 2012, according to local Montana news reports and a disclosure he filed as a candidate for the U.S. House of Representatives two years later listing $16,975 in compensation. After winning a House seat in November 2014, Zinke told a local newspaper that he planned to retain a small stake in PROOF Research “because it’s a great company.”

Both Michael Goguen, the main investor in PROOF Research, and Larry Murphy, the company’s CEO, confirmed to HuffPost that Zinke still owns a small percentage of the company’s stock—1,000 shares out of nearly 57 million.

Presidential nominees for Cabinet positions must disclose all assets worth $1,000 or more on their executive branch financial disclosure report under the category “other assets and income.” A review of Zinke’s disclosure submitted to the Office of Government Ethics (OGE) in January 2017 and certified by then-head of the OGE, Walter Schaub, found that Zinke did not disclose an interest in PROOF Research. His annual congressional financial disclosures from 2015 and 2016 also did not list stock in the company.

Because PROOF Research is a private company, pinpointing a definitive market value for its stock is somewhat tricky. Goguen, a wealthy former Silicon Valley venture capitalist who has invested large sums of money in Whitefish-area companies and philanthropic causes, told HuffPost that as the company’s primary shareholder, he estimates Zinke’s 1000 shares as “worth less than $2,000, and probably closer to $1,000.” Murphy said in a phone interview that he estimates the value of Zinke’s shares at “around $1,000.” Goguen later backtracked somewhat on his estimation, qualifying that a previous audit of the company valued one share at $0.85, which would put the value of Zinke’s shares at $850.

Interior Department spokeswoman Heather Swift said that Zinke’s shares would be valued as less than $1,000—”far below the reporting thresholds for the executive branch.”

“The Secretary is committed to the highest ethical standards and his first meeting as secretary was with the Department’s senior ethics officers.”

“The Secretary is committed to the highest ethical standards and his first meeting as secretary was with the Department’s senior ethics officers,” Swift said via email, adding that Zinke owns 1,000 shares out of 57 million. According to Swift, “Zinke’s last two purchases of the shares were at valuations of 25 cents per share and 40 cents per share, which would put their fair market valuation between $250 and $400.” Beyond the two share purchases she cited, Swift did not specify about other purchases.

But beyond the disclosure concerns, there is the matter of what access this relationship may grant the company at the Department of Interior. According to Zinke’s work calendar, he and his top aides met with a group of PROOF Research executives and a company lobbyist on April 11, 2017. The schedule entry was titled, “Brief Update of Proof Research.”

The company’s delegation included its president and founder K.K. Jense, CEO Larry Murphy, director of research and development John Clements, and Brian Kelly of BK Strategies, the company’s registered lobbyist in Washington, D.C. The calendar described Kelly as “Man About Town,” with an added side note: “Loves Whitefish, MT.” Proof Research’s most recent business filings with the state of Montana show that Kelly is also a director of the company.

Murphy told HuffPost in an email that the company periodically seeks out meetings with various public officials to discuss matters of interest to the company, adding that “[w]e don’t generally comment on the substance of those discussions.” In a follow-up phone conversation, Murphy explained that the company met with Zinke last year mainly because of the “Montana connection,” in an attempt to determine “whether the Secretary knew of any needs in the government for the company’s products.”

Murphy said that during the meeting Zinke primarily listened to company’s executives and requested an update on its operations. The company’s top executives visit Washington annually for trade shows, he said, and their D.C. representative will try to organize meetings with public officials while they are in town.

Federal lobbying disclosures show that Kelly has lobbied the U.S. House of Representatives and the Department of Defense on behalf of the company since 2015, on issues including “defense appropriations and authorizations” and “carbon fiber barrels.” PROOF Research has received at least one government contract in the last year—$11.4 million from the Department of Defense to develop advanced hybrid-composite muzzle brakes and medium-caliber barrels for future weapon systems.

Interior spokeswoman Swift did not respond to questions about Zinke’s meeting with PROOF Research executives and its lobbyist.

“The fact that he met with company executives is troubling since by law he’s required to recuse himself from participating in particular matters that would directly and predictably affect the company. “

“Zinke is required to report assets such as private company stocks with a fair market value of over $1,000,” said Canter. “And the fact that he met with company executives is troubling since by law he’s required to recuse himself from participating in particular matters that would directly and predictably affect the company. “

In addition to his financial interests, Zinke has connections to the company in other ways. He was involved in the 2011 founding of the Montana Firearms Institute, a nonprofit advocacy group to promote the manufacturing of guns in the state, and served as a director of the institute from 2012 until he became Secretary of the Interior last year. A local newspaper reported in November 2012 that PROOF Research’s president Jense was also involved in establishing the group, and it was PROOF Research’s marketing manager, Chris Polley, who replaced Zinke on the board of directors, state business records show. (While the institute held annual meetings and banquets in its first two years of existence, it does not seem to have been very active since then, and does not have a website or social media presence.)

PROOF Research’s corporate leadership is well connected beyond its relationship with Zinke. Goguen, its top investor, was a partner in the venture capital firm Sequoia Capital until two years ago, when he departed following a breach of contract lawsuit from a woman who alleged he had subjected her to years of sexual and emotional abuse. (Goguen denied the allegations of abuse, countersued, and the sides are still dueling in court.)

The board chair of PROOF Research is Matt Marshall, the CEO of Amyntor, a Whitefish-based security company that reportedly approached the Trump administration with a proposal to privatize various sensitive counterterrorism and intelligence operations. Goguen told HuffPost he was an early investor in Amyntor, which also provided security to his estate in Whitefish.

Another company director is retired Lt. Gen. Frank Kearney III, a former deputy director for strategic operational planning at the National Counterterrorism Center and current member of the advisory board of TigerSwan, a controversial security company that employed military-style counterterrorism measures to thwart opposition to the Dakota Access Pipeline.

While PROOF Research has not formally lobbied the Interior Department, under Zinke the department has taken substantial action on several fronts to advance the interests of the hunting and firearms industries. On his first day in office, Zinke signed two secretarial orders: one lifting the ban on the use of lead ammunition on Fish and Wildlife Service land and waters, and the other for reviewing how to expand access for hunters on public lands.

Zinke later announced a proposal to expand hunting opportunities at 10 national wildlife refuges, and appointed Susan LaPierre, the wife of NRA CEO and executive vice president Wayne LaPierre, to the board of directors of the National Parks Foundation, which receives and administers gifts and real estate bestowed to the National Park Service. These moves prompted the NRA to declare that it has a “friend at the Department of Interior” in Zinke.

In September, Zinke announced that the Bureau of Land Management (BLM) would increase access for hunters in the Santa Teresa Wilderness area in Arizona. And in November, the Interior Department announced it would allow trophy hunters to import to the U.S. elephant remnants hunted in Africa. After major public outcry, President Trump announced he was putting that decision ”on hold″ pending further review.

These decisions raise questions over the appropriateness of Zinke’s continued interest in PROOF Research.

“To the extent he’s made decisions to expand hunting and gun-carrying on public lands, he has further raised the potential for a conflict of interest since these decisions may affect the company’s fortunes,” said CREW’s Canter.