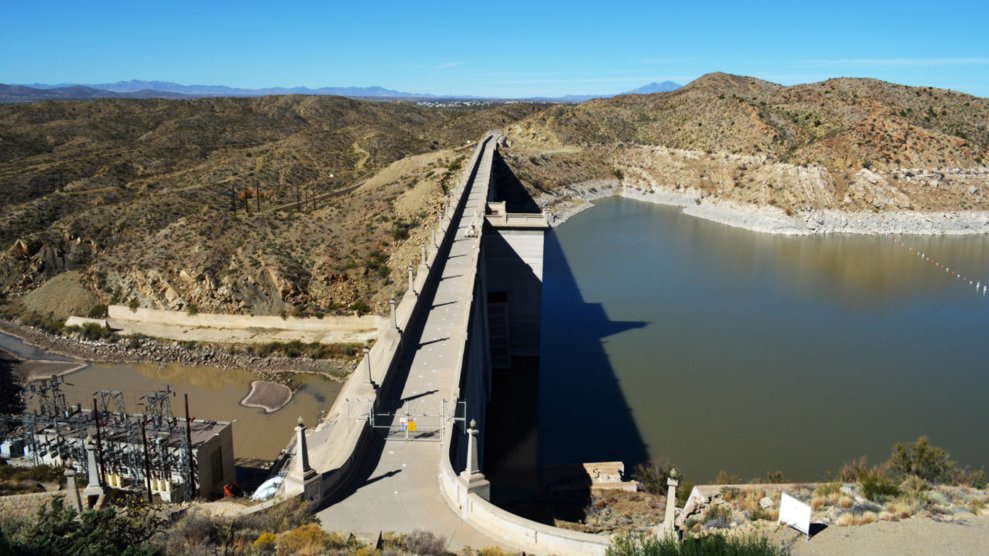 Southern New Mexico’s Mesilla Valley is like an island: a fertile patchwork of farm fields and groves of pecan trees surrounded by the brown Chihuahuan Desert.

For Mesilla Valley farmers, the metaphor rings true in other ways as well. Though they live in New Mexico, the residents of the roughly 90,000-acre-area are caught between their own state and Texas. The Rio Grande water they depend on is not technically New Mexico’s water, but rather part of the water that goes to Texas under the Rio Grande Compact, a treaty ensuring that Texas, New Mexico, and Colorado get their fair share of the river. New Mexico’s delivery obligation to Texas hinges on collecting enough water in Elephant Butte Reservoir, 90 miles from the Texas border and the neighboring Mesilla Valley. Unfortunately, that leaves the farmers downriver in a complicated no-man’s-land of interstate water management.

“We cringe when we hear, ‘Not one more drop to Texas,’ because that means not one more drop for us,” says Samantha Barncastle, the lawyer for the Elephant Butte Irrigation District, which manages and delivers irrigation water to Mesilla Valley farmers.

After more than a decade of back-and-forth between New Mexico and Texas, the fight has finally reached the Supreme Court. The first round of oral arguments took place on Jan. 8, with a final decision expected by early spring. For the farmers, the conflict has only heightened their sense of isolation from their own state—and made the costs of poor water management in a hotter and drier West more obvious than ever.

Built in 1916 by the Bureau of Reclamation, Elephant Butte Dam made a large-scale agricultural economy possible in New Mexico’s dry south. But disputes between states over the river continued, especially during times of drought.

The latest stems from a 2014 lawsuit filed by the state of Texas, claiming that by allowing farmers in southern New Mexico to pump groundwater, New Mexico was depleting the water destined for Texas under the Rio Grande Compact.

Farmers in the Mesilla Valley receive a yearly allocation of 36 inches of water per acre from the reservoir, as long as flows in the Rio Grande are sufficient. But in the 1950s, a severe drought curtailed that allotment. To supplement irrigation supplies, the Bureau of Reclamation encouraged local farmers to pump groundwater.

“Everyone did,” recalls Robert Faubion, a fourth-generation local farmer.

When the current drought began in 2003, farmers came to rely more on their groundwater wells, sometimes receiving almost 80 percent of their yearly irrigation needs from the aquifer. (The region’s towns and cities, including Las Cruces, rely 100 percent on groundwater.) According to the U.S. Geological Survey Mesilla Basin Monitoring Program, between 2003 and 2005 the Mesilla Valley aquifer declined by up to 5 feet and held steady until 2011, when it began dropping sharply again. In some places, groundwater levels fell by 18 feet.

As the situation worsened, the Elephant Butte Irrigation District and its longtime rival in Texas, the El Paso County Water Improvement District, agreed that the time had come to resolve their grievances. So the two agencies settled on an “operating agreement” in 2008, which required New Mexico to relinquish some of its Rio Grande water to Texas in exchange for Texas ceasing its complaints about groundwater pumping.

The signing coincided with Valentine’s Day. “We had sort of a love fest,” says Gary Esslinger, the treasurer and manager of the Elephant Butte Irrigation District.

The love lasted until 2011, when, in a surprise move, then-New Mexico Attorney General Gary King sued the irrigation district and the El Paso County Water Improvement District No. 1 as well as the Bureau of Reclamation, arguing that the deal gave away too much of New Mexico’s water. The decision to sue one of its own irrigation districts was, to Barncastle, “incredibly strange.”

In 2014, Texas fired back with its own lawsuit against New Mexico, bringing us to today’s scenario: If the Supreme Court rules against New Mexico, the state budget will take a hit. New Mexico could owe billions of dollars in damages—on top of the $15 million already spent on legal fees—and potentially have to find additional sources of water to send to Texas, as a way to make up for its groundwater pumping.

According to Barncastle, the case is motivating stakeholders in southern New Mexico to work on a framework for better groundwater management. The impacts of climate change are adding yet another layer of uncertainty, since no one knows how weather patterns might affect water scarcity in the future.

Regardless, the outcome will have major implications, says southern New Mexico Sen. Joe Cervantes. Most of the state’s population and industry is located along the riparian corridor. “If the health of the Rio Grande is threatened, then all of those communities are put at risk,” Cervantes warned.