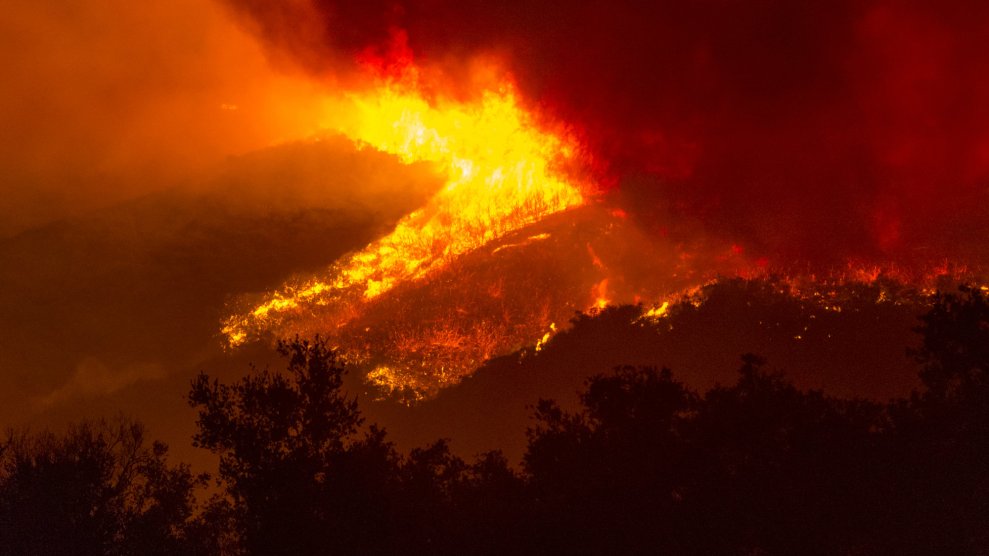 This past year, 2017, was the worst fire season in American history. Over 9.5 million acres burned across North America. Firefighting efforts cost $2 billion.

This past year, 2017, was the seventh-worst Atlantic hurricane season on record and the worst since 2005. There were six major storms. Early estimates put the costs at more than $180 billion.

As the preventable disease hepatitis A spread through homeless populations in California cities in 2017, 1 million Yemenis contracted cholera amid a famine. Diphtheria killed 21 Rohingya refugees in Bangladesh, on the run from a genocide.

Disaster, Pestilence, War, and Famine are riding as horsemen of a particular apocalypse. In 2016, the amount of carbon dioxide in Earth’s atmosphere reached 403 parts per million, higher than it has been since at least the last ice age. By the end of 2017, the United States was on track to have the most billion-dollar weather- and climate-related disasters since the government started counting in 1980. We did that.

By the end of 2017, the United States was on track to have the most billion-dollar weather- and climate-related disasters since the government started counting in 1980. We did that.

Transnational corporations and the most powerful militaries on Earth are already building to prepare for higher sea levels and more extreme weather. The FIRE complex—finance, insurance, and real estate—knows exactly what 2017 cost them (natural and human-made disasters: $306 billion and 11,000 lives), and can calculate more of the same in 2018. They know that the radical alteration of Earth’s climate isn’t just something that’s goingto happen in 100 years if we’re not careful, or in 50 years if we don’t change our economy and moonshot the crap out of science and technology. It’s here. Now. It happened. Look behind you.

Let me rephrase: Absent any changes, by 2050 Earth will be a couple degrees hotter overall. Sea levels will be a foot higher. Now, 2050 seems as impossibly far away to me as 2017 did when I was 12 years old. I live in the future! And I like a lot of it. I like the magic glass slab in my pocket and the gene therapy and the robots. I mention this because in 2050, my oldest child will be the same age I am today, and I have given him a broken world.

I don’t want that.

So 2017 taught a lesson, at last, that scientists and futurists have been screaming about. Humanity has to reduce the amount of carbon it’s pumping into the air. Radically. Or every year will be worse from here on out.

In 2050, my oldest child will be the same age I am today, and I have given him a broken world.

But 2017 also made plain the shape of the overall disaster. All those fires and floods and outbreaks are symptoms of the same problem, and it’s time to start dealing with that in a clear-eyed way. It’s also time to start building differently—to start making policies that understand that the American coastline is going to be redrawn by the sea, and that people can’t keep building single-family homes anywhere they can grade a flat pad. The wildland-urban interface can’t keep spreading at will. People can’t keep pumping fresh water out of aquifers without restoring them. Infrastructure for water and power has to be hardened against more frequent, more intense storms, backed up and reinforced so hundreds of thousands of people don’t go without electricity as they are in post-hurricane Puerto Rico.

In short: Change, but also adapt. Fire season in the West is now a permanent condition; don’t build buildings that burn so easily in places that burn every year. Hurricanes and storm surges are going to continue to walk up the Caribbean and onto the Gulf Coast, or maybe along the seaboard. Don’t put houses on top of the wetlands that absorb those storms. Don’t insure the people who do. Build ways for people to get around without cars. Create a power grid that pulls everything it can from renewable sources like wind and solar. Keep funding public health research, surveillance, and ways to deal with mosquito-borne diseases that thrive in a hotter world.

And the next time someone in a city planning meeting says that new housing shouldn’t get built in a residential area because it’s not in keeping with the sense of the community and might disrupt parking, tell them what that means: that they want young people to have lesser lives, that they don’t want poor people and people of color to have the same opportunities they did, and that they’d rather the planet’s environment get crushed by letting bad buildings spread to inhospitable places than increasing density in cities.

This apocalypse doesn’t hurt everyone. Some people benefit. It’s not a coincidence that the FIRE industries also donate the most money to federal political campaigns. Rich people living behind walls they think can’t be breached by any rising tide, literal or metaphoric, made this disaster. And then they gaslighted the vulnerable into distrusting anyone raising the alarm. The people who benefit have made it seem as if this dark timeline was all perfectly fine.

It isn’t. And that’s why it’ll change.

“The net result of most disasters is a dramatic increase in social solidarity among the affected populace during the emergency and immediate post-emergency periods.”

In 1957 Charles Fritz and Harry Williams, the research associate and technical director, respectively, of the National Academy of Sciences’ Disaster Studies Committee, wrote a paper that sparked the field of disaster sociology. Their findings were counterintuitive then, and somehow remain so. People in disasters, they said, don’t loot and riot. They help each other. “The net result of most disasters is a dramatic increase in social solidarity among the affected populace during the emergency and immediate post-emergency periods,” they wrote. “The sharing of a common threat to survival and the common suffering produced by the disaster tend to produce a breakdown of pre-existing social distinctions and a great outpouring of love, generosity, and altruism.”

In a disaster, we help each other. The trick is recognizing the disaster. Through that lens, fixing the problem and protecting one another against its consequences isn’t merely inarguable. It’s human nature. We’re all in this together.