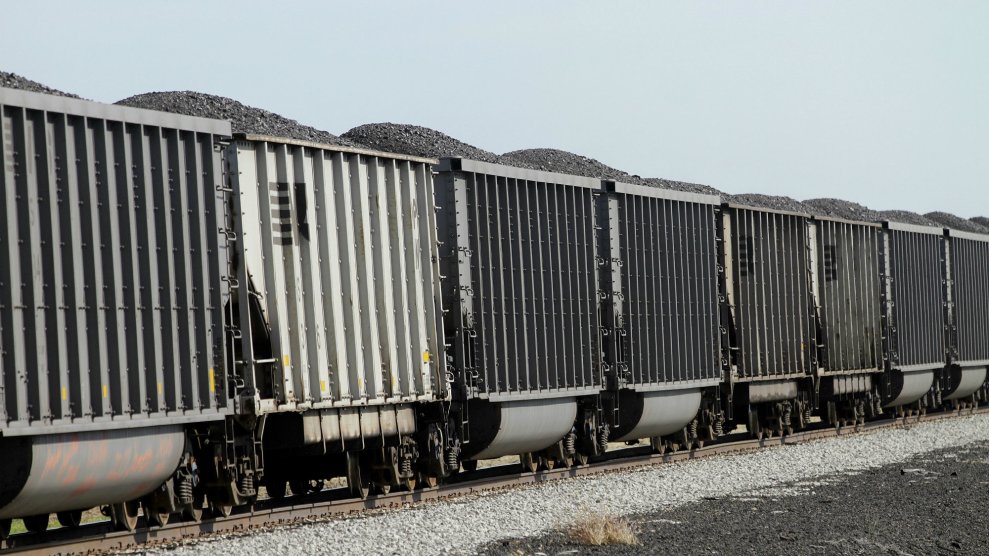 Each day, Norfolk Southern, a large transportation company, ships coal nearly 2,000 miles across Virginia to Lambert’s Point—a low-income and predominantly black community on the Elizabeth River in the city of Norfolk. When the coal arrives at Lambert’s Point, a coal exporting facility, it’s dumped into shiploaders before being sent off to different parts of the world.  In one year the facility can handle up to 48 millions tons of coal in its 200,000 coal cars.

The company boasts that it has created 44 jobs in the state in 2016 and has donated $22 million to various charities over the last five years. But for residents in the surrounding neighborhoods, these contributions are less important than  the coal dust that comes off the rail cars and has coated their community for as long as anyone can remember.

“Norfolk is not being a good neighbor to us,” Anita Newsome, who has lived in Lambert’s Point for 30 years tells Mother Jones. “They won’t even sit down and talk with us.”

Norfolk Southern did not respond to a request for comment.

When coal is being transported, hazardous particles of dust routinely fly off the rail cars into the surrounding communities. The Sierra Club reports that those who are exposed are vulnerable to increased rates of childhood bronchitis, asthma, pneumonia, emphysema, heart disease, and reduced lung capacity. They also note that coal cars release 90,000 pounds of coal dust into nearby Virginia towns and cities every year.

The Norfolk Southern coal terminal on the Elizabeth River began operations in 1885 and never had a permit regulating coal emissions because it predated the Clean Air Act of 1970. In 1992, the Virginia Department of Air Pollution Control granted the company its first air pollution permit—but regulations only involved new construction, not the uncovered rail cars transporting coal from other parts of Virginia to the coast. The only limit on how much coal dust the company can emit is that it cannot exceed the amount of coal that has passed through the terminal.

Although Norfolk Southern’s terminal has been operating in the community for more than 100 years, many residents were unaware that the substance coating their homes and cars was coal dust.  “I thought it was just normal pollution,” Anita Newsome says. “We weren’t aware of what we were breathing in.” Coal dust contains mercury, arsenic, lead and other toxic metals.

“I lived in other neighborhoods, but when I moved to Lambert’s Point in 1990, I had severe asthma attacks and had to be hospitalized,” Gerald Newsome, Anita’s husband, says. In the nearby city of Newport News, asthma rates for residents who live near a large coal terminal were two times higher than the city and state average in 2005.

“We have met a lot more people who have been diagnosed with asthma,” Anita Newsome says about her community.  “They’re getting their medical records and having a lot of ‘Aha!’ moments.”

Even if community residents see a connection between poor respiratory health and the coal dust, others don’t. In 2015, Norfolk Southern conducted its own public health study in response to complaints about the coal dust and concluded that the levels of coal dust were not hazardous to the health of Lambert’s Point residents. The Virginia Department of Environmental Equality agreed, setting the stage for advocates to mount a campaign to persuade them otherwise.

In an April press release from New Virginia Majority, announcing a community meeting, Lambert’s Point residents describe how the coal dust has affected their health. “Since moving less than three blocks away from Norfolk Southern’s facility two months ago, my six-year-old son who suffers from asthma has gone to the emergency room four times,” resident Mary Mobley said. “His medications have increased from five a day to now 12 a day.” The reason? Her son’s doctor has confirmed that her son’s worsening condition is due to the new and “heavily polluted” environment that they now live in, she wrote.

The Virginia Department of Health found that residents in the southeastern part of Virginia, where Lambert’s Point is located, suffer disproportionately from asthma and other diseases and have a lower life expectancy than other Virginians. But the Department of Environmental Quality saw no connection between those statistics and coal dust.

For long-time resident Anita Newsome, there is one explanation for this: “We are more disposable because we’re a predominantly black neighborhood and we’re working class.”

Coal dust has been a problem all over the country. One solution would be to cover coal trains to reduce their effect of the dust on the environment and protect the health of communities where they operate. In 2013, seven groups in Washington state sued the large rail company, Burlington Northern Santa Fe Railway, for spilling coal dust into public waterways.  Last year, a settlement was reached in which BNSF agreed to study the use of physical covers for its coal trains. “We’ll have to work through the study and see what comes from that and how it would impact not only BNSF but the industry,” a company spokeswoman said at the time.

Industries have their reasons for not covering their coal cars. In 1991, state lawmakers considered a law that would force Norfolk Southern to cover their rail cars. The company pushed back, arguing that it would be cost prohibitive. According to the Sierra Club, the cost of covering the rail cars is less than one percent of the company’s annual income.

“I think the reason they’re fighting so hard [not to cover their rail cars],” Anita Newsome says, “is because they value their profit over the people that life at their front door.”