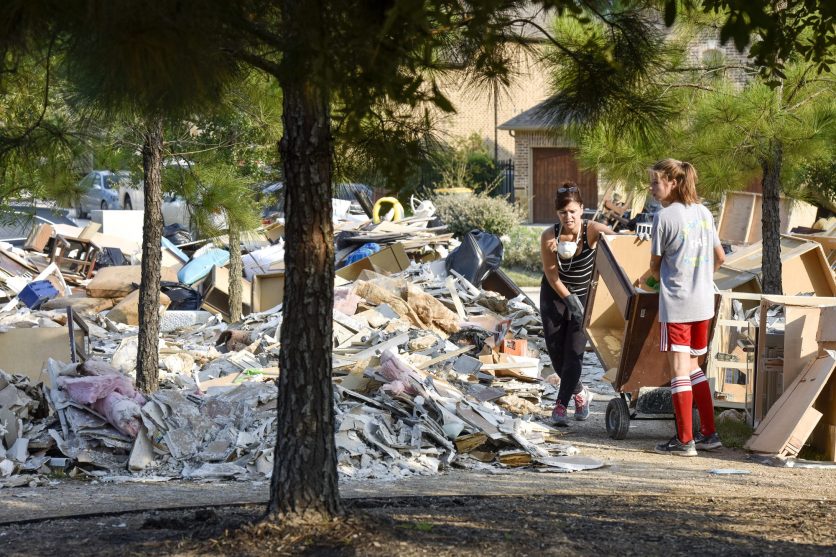 Volunteers Valeria and Julia Abreu move a damaged piece of furniture from a family's home to a debris pile in Kingwood, Texas after Hurricane Harvey.Chelsea Purgahn/AP

This story originally appeared on ProPublica and was co-published with the Texas Tribune.

The Red Cross’ anemic response to Hurricane Harvey left officials in several Texas counties seething, emails obtained by ProPublica show. In some cases, the Red Cross simply failed to show up as it promised it would.

In DeWitt, a county of 20,000 where Harvey ripped apart the roof of a hotel, Emergency Management Coordinator Cyndi Smith upbraided a Red Cross official in a Sept. 9 email:

“Red Cross was not there as they were suppose[d] to be with the shelter and again no communication to what this is actually about and that you have been in DeWitt County doing anything.”

With fewer than 24 hours’ notice, Micah Dyer, a school superintendent in DeWitt County, was forced to run a shelter on his own in an unused district building that would eventually house 400 people. For the first three days the shelter was opened, only two Red Cross volunteers were there — neither had any experience running a shelter, Dyer said in an interview.

“Every hot meal came from us,” Dyer said. “[School district employees] had to go to our pantries and walk-in coolers and get whatever we could get so people would have food.” Dyer says the Red Cross didn’t appear with supplies until the fourth day of the storm, and didn’t bring enough cots or food for those housed in the shelter, he said. A significant portion of the Meals-Ready-to-Eat the charity did bring had gone bad, he said.

The charity contested his account, saying in a statement that it maintained two shelters in DeWitt County — including the one Dyer ran — “and recorded a total of 1,599 overnight stays.”

We have only a partial picture of the Red Cross’ response to the massive storm. ProPublica received emails through public records requests from several counties, large and small. But they don’t cover the full swath of the state affected by the storm.

Still, the frustration many authorities felt with the Red Cross was striking. Officials in Jefferson County, which contains Beaumont, were so fed up with the Red Cross that they kicked out a charity employee assigned to work with government officials from the headquarters for the storm response.

“Everything we asked him to do, I didn’t feel was getting done in a timely manner,” said Mike White, Jefferson County’s deputy emergency management coordinator.

In Colorado County, west of Houston, a local official told colleagues on Aug. 30 the charity had simply failed to show up at a shelter as promised.

“Persons needing intermediate-term shelters have been transferred to the Red Cross Shelter in Sealy. Red Cross approved the shelter, but the promised shelter management teams and the supply trailer never arrived, nor do they know where they went,” Charles Rogers, the county’s emergency management coordinator, wrote.

On Aug. 27, two days after Harvey made landfall, the fire marshal of Humble, a small city in the Houston metro area, sent an urgent plea as his city faced severe flooding: Could the Red Cross help to staff a shelter in his area?

“I hate to say this but the Red Cross is completely out of resources and have almost no road accessibility,” responded Kristina Clark, an emergency management official in Harris County, which contains Houston. “The best thing I can recommend is to open something and message to your people to bring THEIR OWN food, sleeping bags, clothes, medication, etc.”

The Red Cross said in a statement that, overall, it has provided more than 414,000 overnight shelter stays, and with its partners served “almost 3.2 million meals and snacks.”

Providing relief in the wake of the storm was an enormously difficult task. Tom McCasland, Houston’s director of housing and community development, said in an interview that it wasn’t just the Red Cross — but also city and county governments — that didn’t have the resources to respond to the storm. The storm destroyed over 15,000 homes and damaged over 200,000.

“No one was prepared for this in terms of magnitude of numbers that showed up” at the George R. Brown Convention Center, one of the major shelters in Houston, McCasland said. “Given the circumstances, I can say that [the Red Cross] worked their hearts out.”

Many others singled out the Red Cross for criticism. At a public meeting earlier this month, Houston City Councilman Dave Martin let loose on the charity for being the “most inept, unorganized organization I’ve ever experienced.”

Martin urged Houstonians not to donate. “I have not seen a single person in Kingwood or Clear Lake that’s a representative of the Red Cross,” he said, referring to two hard-hit areas. “You know who opened our shelters? We did. You know who sent water and supplies? We did.”

In an interview with ProPublica, Martin said he ran into Gail McGovern, the charity’s CEO, in a parking lot several days after Harvey hit. When he raised his concerns to her, Martin said she responded: “Do you know how much we raised with Katrina? $2 billion. We won’t even raise hundreds of millions here.’ I just thought, ‘Really, Gail? That’s your response to me?’”

Asked about McGovern’s conversation with the city councilman, the Red Cross said, “We understand his frustration.” The charity said it has raised around $350 million for Harvey.

As ProPublica has previously detailed, the charity’s attempts to respond to large disasters in recent years have been harshly criticized by victims, government officials and, in many cases, by the Red Cross’ own staff. Reconstruction efforts after the 2010 Haiti earthquake fell far short of the charity’s public claims. After Superstorm Sandy hit New York in 2012, Red Cross leadership diverted disaster relief resources for public-relations purposes. And after floods in Louisiana, a state official wrote that the Red Cross “failed for 12 days.”

While the Red Cross operates largely as a private nonprofit, it was created by Congress more than a century ago and has an officially mandated role to work with the government in providing food and shelter after disasters.

As disasters have gotten larger and more frequent, the Red Cross has gotten smaller. Under the nine-year tenure of McGovern, who came from the private sector, the group has had budget shortfalls and cut staff sharply. Local chapters, including in Texas, have been shuttered.

The cuts have stripped the charity of experienced disaster management personnel. Under McGovern, the number of paid employees has shrunk from 36,000 in 2008 to just over 21,000 in 2015, according to tax filings.

The group sent fewer responders after Harvey than it did after Superstorm Sandy hit the East Coast five years ago. Six days after Sandy hit New York, the charity reported it had “more than 5,000 Red Cross workers” responding to the disaster. Six days after Harvey made landfall, the Red Cross reported “2,300 disaster workers” in Texas. A Red Cross spokesperson told ProPublica the Sandy response was larger because the storm affected 11 states. It also said technology has resulted in the charity becoming “more efficient and effective in our response.”

The charity has said it would give $400 directly to households in the most affected areas. But the program has been beset by technical glitches and unexplained denials, according to reporting by NBC News and several Texas outlets. The Red Cross has apologized for the problems.

There have also been problems with a Red Cross hotline for disaster victims. The hotline is staffed by employees of a contractor, TeleTech. A staffer at the firm described frequent trouble with a system that was supposed to identify open shelters for those who needed them.

“Their programs we use to find shelters for the victims are not working properly, often telling agents that there [are] openings when in fact the shelter is full,” the staffer said. “Victims get there and are turned around and call us back saying that they used the last of their gas, only to be directed to another shelter with the same results.” The staffer requested anonymity for fear of reprisal for speaking to the media.

The Red Cross said in response that “shelter populations are changing on a minute-by-minute basis” during disasters, which sometimes results in reported figures becoming quickly out of date.

The Red Cross is still in Texas and is also responding to Hurricanes Irma and Maria. Overall, the Red Cross says it has partnered with local agencies to open shelters in eight states, Puerto Rico and the U.S. Virgin Islands.