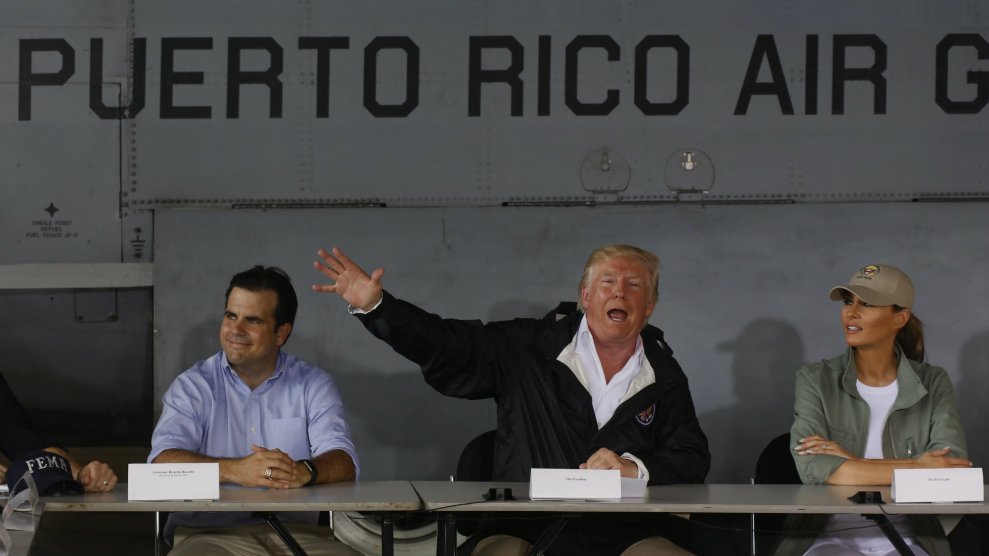 Trump seated next to Puerto Rican Gov. Ricardo Rosselló during a visit to the island.Thais Llorca/EFE/Zuma

As stories of hunger, desperation, and death emerged from Puerto Rico in the wake of Hurricane Maria last week, the salsa superstar Marc Anthony asked a favor of an old friend. Dr. Irwin Redlener, who is perhaps best known for founding the Children’s Health Fund alongside musician Paul Simon, is now the director of Columbia University’s National Center for Disaster Preparedness. And Anthony, who met Redlener in 1998 during Simon’s Broadway play The Capeman, wondered if the disaster response specialist would fly down to San Juan to speak with local leaders about what still needed to be done to address the island’s humanitarian crisis.

So on Saturday morning, Redlener arrived in Puerto Rico to meet with Governor Ricardo Rosselló, the territory’s secretary of health, and officials from the Federal Emergency Management Administration. When he left that same evening, he came away with a better picture of what the U.S. government was doing wrong—that is, beyond President Donald Trump’s insulting tweets about San Juan Mayor Carmen Yulín Cruz.

“If the White House had been more engaged, less disinterested, less distracted by kneeling football players and Twitter, I’d like to think we would have had an earlier, much more robust response.”

Like many before him, Redlener said the central problem in Puerto Rico is the Department of Defense, which was slow to deploy troops and equipment to the island’s 3.4 million people. Ten days after Maria made landfall, he said he was “shocked” that planes were landing by pilots’ visuals rather than an instrument landing system. “The Air Force is fully capable in rapid fashion of setting up a control tower,” he said. “I thought that that issue alone—the failure of a functioning airport 10 days later—to be a good indication of the slowness of response to this horrendously unprecedented natural disaster.”

The White House and the DOD have said this slowness was due to circumstances beyond their control. “The storm caused these problems, not our response to it,” Tom Bossert, Trump’s homeland security adviser, wrote in a leaked memo published by Axios on Sunday. Trump has echoed those comments. “There’s never been a piece of land that we’ve known that was so devastated,” he said on Monday. Plus, DOD officials note that under federal law, they can only give Puerto Rico the military support its governor asks for—the implication being that if the island doesn’t have enough military support, it’s their fault. Their governor should have asked for more.

Redlener said it’s true that the devastation is unprecedented. “The logistical problems are as severe as I’ve ever seen in a disaster,” he said; roads destroyed, communications down, fuel difficult to distribute. But those logistical problems were exactly why Puerto Rico needed a much larger military presence early on, as that agency is the only one that can essentially build infrastructure out of nothing in a matter of days. “They needed a massive engagement, a full, robust, in-force presence of the DOD, and they didn’t get it,” Redlener said. Logistical problems on the island don’t explain that delay.

What Redlener thinks could explain the delay is Puerto Rico’s request for military aid. What was in that request, and when was it made? How long did it take for the Trump administration to approve it? And how long did it take for the military to actually deploy? “Somewhere between Puerto Rico’s request and the White House and DOD, we ended up with a very slow response,” he said. “And that was very unfortunate.”

I asked spokespeople at FEMA, DOD, and the Puerto Rican government for specifics on the island’s disaster request—the contents, the date, and the timeline of approval. A spokesperson for FEMA recommended I contact the DOD for questions about military response. A spokesperson for the military’s Northern Command, which responds to major disasters, referred me to local response officials for Puerto Rico. An inquiry to Puerto Rico’s emergency response agency went unanswered.

Some reports indicate that the Trump administration has been slow to grant requests for aid. Four days after Maria hit, Governor Rosselló told Politico that the island needed “more resources from the Department of Defense so we can get helicopters and resources.” And the White House has reportedly refused to answer questions about whether Trump was briefed by anyone directly involved in hurricane response in the first three days after the devastation become clear.

The governor praised most of the immediate federal preparation and response, but wants more DoD help for those two response efforts.

Redlener—who, for what it’s worth, praised the response from both FEMA and the Department of Health and Human Services —said it’s clear that Trump still holds some of the blame for the military’s slow response, no matter who was waiting for who. “I’m reminded of Harry Truman’s desk plaque: ‘The Buck Stops Here,’” he said, slamming Trump for being preoccupied by golf and social media during a humanitarian disaster. “If the White House had been more engaged, less disinterested, less distracted by kneeling football players and Twitter, I’d like to think we would have had an earlier, much more robust response.”