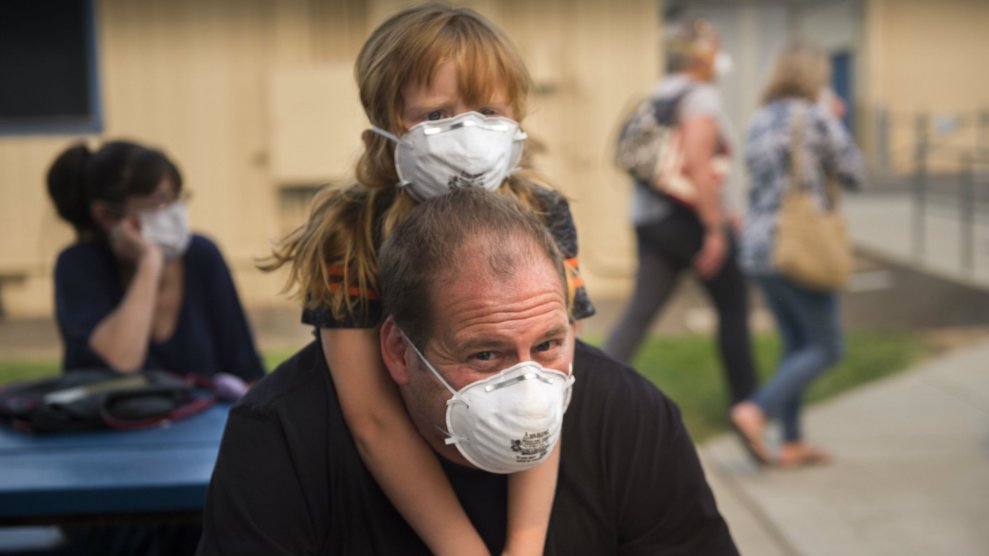 “It is completely unsafe to be here at this moment,” said Jennifer Franco, a resident of Fairfield, California, on Wednesday afternoon, as massive wildfires ripped through Santa Rosa and Napa a few miles west. But she wasn’t talking about the flames—she was talking about the smoke. Accelerated by high-speed seasonal winds, ash-laden air was blowing eastward, directly into her neighborhood. “Since Tuesday morning, air quality is beyond terrible,” she said. “I’ve been having chest pain, and now I’m using a respirator.”

In Sebastopol, just west of Santa Rosa, winds were blowing in a more favorable direction. But retired social worker Vaughn Whalen said gray haze still obscured the blue sky there, making the sun look eerie, dull, and orange. “I’m a tougher old fella,” he said, when asked about how he was dealing with the smoke. “But a friend of mine who lives nearby has asthma. She was telling me that the smoke is in the house. Her eyes are burning. Her chest hurts. She has difficulty breathing.”

The most immediate threat from the 22 devastating wildfires currently roaring through California are the immediate fire zones. At least 21 people have died there; more than 600 people have gone missing; and thousands of buildings have been destroyed. But beyond the fire zones, millions of Californians are facing a secondary, more insidious threat: polluted air, rife with tiny particles small enough to penetrate deep into the circulatory system. Those potentially deadly particles are creating unhealthy air as far as 70 miles away from fire zones, according to Bay Area Air Quality Management District spokesman Tom Flannigan. But people closer to the fire zones are even more at risk, since the air in those regions could also be tinged with toxic heavy metals like arsenic, cadmium, copper and lead, as the smoke picks up chemicals from burned-up plastic, cars, and building materials.

“These are unprecedented conditions,” Flannigan said, estimating that four to five million people living in the Bay Area are breathing toxic air outdoors. “We’ve measured some of the highest air pollution ratings in the Bay Area ever recorded.” For context, Flannigan pointed to Beijing, China, perhaps the poster city for air pollution. “When they measure in Beijing on their worst days, they’re around 500 on the Air Quality Index,” he said. “And those are the kind of readings we’ve been seeing here.”

“When they measure in Beijing on their worst days, they’re around 500 on the Air Quality Index,” he said. “And those are the kind of readings we’ve been seeing here.”

The particles within this smoke pose the biggest short-term risk to human health. It’s been extensively proven that high-dose exposure to so-called “fine particulate” pollution, or PM2.5, can trigger death, particularly in people with pre-existing conditions like asthma or heart disease. And breathing in smoke can make anyone—even healthy people—experience chest pain, dizziness, or shortness of breath. In California, those effects are already turning up: At least 20 people from outside immediate fire zones had visited UC San Francisco’s hospital facilities due to symptoms from smoke inhalation as of Tuesday evening, according to UCSF spokesperson Elizabeth Fernandez.

There’s also a risk that some Californians could suffer longer-term health consequences from this wildfire smoke. “Right now we’re most worried about exacerbations of preexisting diseases,” said John Balmes, a physician and professor of medicine at UCSF. “But with the heavy exposure to air pollutants in the fire zone, people could actually develop asthma from smoke exposure.” Breathing in carcinogens like arsenic from wildfire smoke could also cause cancer, but “that hasn’t been well-studied,” Balmes said.

It may seem like these situations are inevitable or happenstance, that there’s nothing people or the federal government could do to mitigate disaster-related conditions that threaten the health of so many Americans. But that’s just not the case. Indeed, just last week, the House Subcommittee on Environment held a hearing about the role of fire-related air pollution—and in striking contrast to virtually all other environmental concerns, Republican lawmakers are leading the charge to figure out how to stop air pollution from wildfires from getting so bad.

Republican Congressman John Shimkus from Illinois, the chairman of the environment subcommittee, expressed outrage over the unprecedented pollution from wildfires now enveloping the West. “Nearly every other significant source of combustion—from vehicles to power plants to factories—are subject to very stringent controls. But the emissions from wildfires are completely uncontrolled,” he said. “Congress should be looking at any and all ways to address wildfires and their air emissions, and most important of all, the policy measures that can help prevent or minimize wildfires in the first place.”

Obviously, the federal government cannot control wildfire smoke pollution the same way they control pollution from coal plants or cars—forests do not choose to release smoke into the atmosphere. But serious discussions can be entertained about how to reduce the risk and intensity of fires through better management of forests, particularly forests on public lands. “Often, the largest and most polluting fires originate on or involve federal lands,” Shimkus said during last week’s hearing.

UCSF physician John Balmes agrees. That’s why he argues for better funding for the the U.S. Forest Service, which oversees national forest land. Oftentimes, he said, the agency does not have the money to do its job. “Their budget has to be supplemented every year for the funds to fight fires, and they usually don’t have money to do preventative maintenance tasks like clear out underbrush and get rid of dead trees,” Balmes said. Improper funding also means that Forest Service officials are short of resources to carry out prescribed or controlled burns, which reduce the risk of extreme wildfires in the future.

Predictably, however, enhanced funding for the Forest Service is not a Trump administration priority. Quite the contrary: The White House’s proposed budget would cut $300 million from the Forest Service’s wildfire fighting initiatives, together with $50 million from its wildfire prevention efforts. The proposed budget would also reduce funding for volunteer fire departments by 23 percent. And even with the California GOP delegation in Congress determined to shield their constituents from intense wildfire air pollution, most Republican lawmakers still refuse to acknowledge that man-made climate change is making these wildfire seasons worse. Even Shimkus, for all his eagerness to regulate the adverse effects of wildfires on air quality, is a climate denier: He has said God would never let climate change ruin the earth.

What’s certain is that climate change will ruin humans’ ability to inhabit the Earth. And the air pollution from wildfires is just one among a growing roster of weather-related disasters wreaking havoc for humanity. (See also: Puerto Rico, Texas, and Florida, over just the past month-plus.) “We’re already seeing an increase in catastrophic wildfires in California, and it’s only going to get worse as the climate gets warmer and drier,” Balmes said. So long as Trump and congressional Republicans deny climate change—and therefore do nothing to slow its impacts—the health hazards from those wildfires only stands to get worse as well.