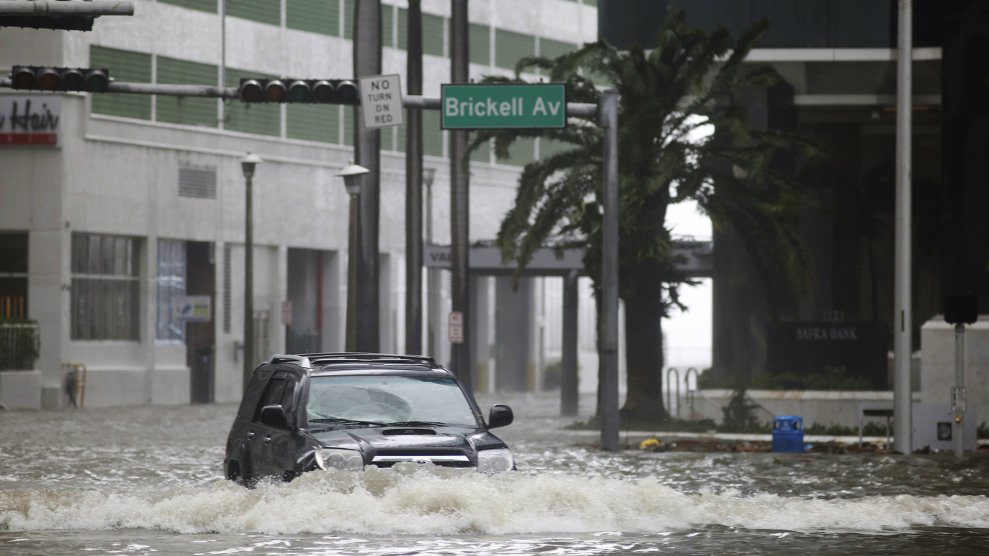 Five years ago, Superstorm Sandy raged against New York City, flooding subway stations, causing widespread blackouts and killing 43 people. And now, a new paper published today in the journal Proceedings of the National Academy of Sciences reminds us that someday, sooner or later, it will happen again.

It’s no coincidence that work on that paper started just a few months after Sandy’s arrival on October 29, 2012. “We can’t really ignore this because it’s something that’s already happening and it’s going to get worse,” lead author Andra Garner, a climate scientist at Rutgers University, tells Newsweek. “We need to be planning for this kind of thing.”

So she and her colleagues used models of tropical cyclone activity to study how badly future storms will flood the city. The results are pretty grim: the paper found a flood depth of more than seven feet—which took place only about every 500 years before 1800—will be occurring every five years or so by about two decades from now. That’s not too dangerous a flood, says Philip Orton, an oceanographer at the Stevens Institute of Technology who was not involved in the new paper. “It’s really not Sandy,” he says, which brought floodwaters four feet deeper. But it’s still a stark increase in frequency.

Of course, New York City has been painfully aware of how vulnerable it is to flooding for the past five years. But this study doesn’t just look at climate change in the past and in the immediate future—it forecasts flooding risks all the way out to 2300. “That’s rare that you see that,” Orton says.

According to Klaus Jacob, who studies climate adaptation at Columbia University’s Lamont-Doherty Earth Observatory and who wasn’t involved in the new study, the results mean New York City should be thinking about flood protection in a very different way than it does now. Instead of focusing only on the next few decades, he says, we need to envision what we want the city to look like centuries from now and find flood mitigation measures that get us there.

“We can’t just keep building walls and seal New York City behind walls,” he tells Newsweek, adding that strategy had disastrous effects in New Orleans during Hurricane Katrina. “We want a sustainably resilient New York City, not just a temporarily resilient city,” he adds, calling the alternative “a climate Detroit.”

“My hunch is that most of them will hinder us in the long term because they’re mostly protective,” Jacob says of initiatives in progress, like The Big U, a collection of storm-absorbing measures meant to buffer the southern tip of Manhattan from floods, and barriers on Gowanus Canal and Newtown Creek in Brooklyn. “All protective measures have only a short- to medium-term functionality, and then they’ll be overcome.” Instead, he’d rather see the city move its assets inland and higher up.

The new paper does offer one small bright spot for New York City: tropical cyclones will actually pass by at greater distances into the future, reducing their impact. “The track shift was probably the biggest surprise that we found here,” Garner says. And that’s enough to counteract the prediction that storm surge will be more severe. “In this case, it looks like it’s probably good news for New York City, but we also think those storms are going somewhere—so are there other regions that are getting more direct hits from these storms?”

And unfortunately, storm surge, no matter what type of storm causes it, isn’t the whole picture. Storm surge only adds to the baseline of sea level, and that’s already rising, particularly in New York City. Unless humans step in to avert continuing climate change, sea level rise is going to continue—and that means so will flooding. And of course, that flooding won’t stop at New York City, even though the current study does. Garner says she’d like to expand the research to look at other cities, but does expect that plenty of other places will also see higher flood risks under climate change.

“Within a generation, during this period of decades, we can impact many future generations,” Orton says. “There’s powerful moral questions here and huge uncertainties.”