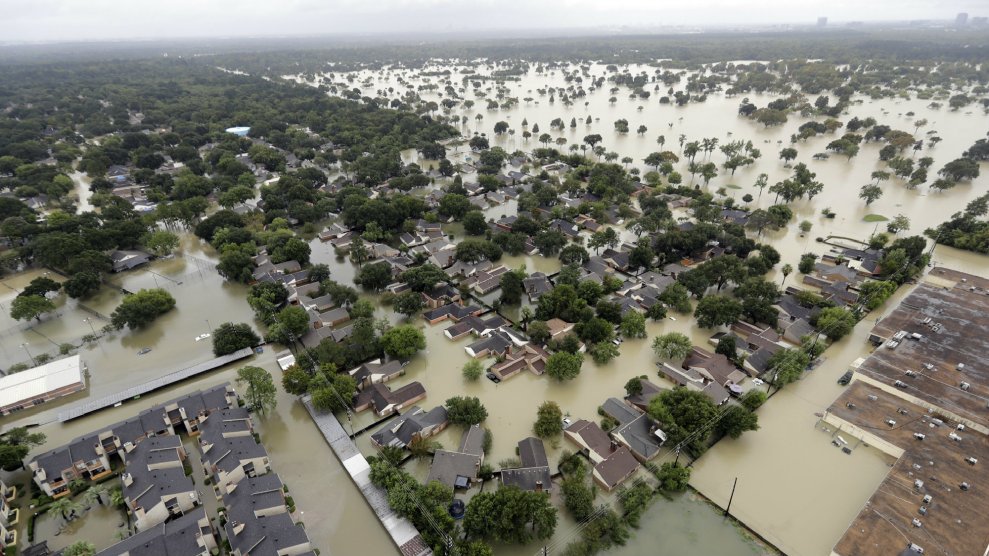 Want to design a city to maximize flood damage? Start on very flat land — any kind of slope will help water flow out of town. Next you’d want to create incentives for people to build the city wide and low; by covering a large area with concrete and asphalt, you collect more water whenever it rains. Then, be sure not to build much in the way of a drainage system. Ideally you’d be close to a humid body of water. And if you really wanted to put a cherry on top, you’d devote the city to industry that contributes to the warming of the seas, thereby increasing the likelihood of extreme downpours.

While America’s fourth-largest city is a poster child for flood vulnerability, much of the United States is built on similar principles. When the Dutch, the experts in flood prevention, look at us, they try to be polite, but really there’s no way around the truth.

“The United States is a little bit lagging behind in flood protection, to be honest,” says Jeroen Aerts, professor of water and climate risk at Vrije University in Amsterdam.

Aerts says that good flood control rests on three pillars: first, fortification to keep water out; second, buildings that can withstand flooding; and third, resources for evacuation and reconstruction.

The United States does fine on the third pillar, but fails on the first two. We build low-slung, widespread exurbs — partly because many American cities grew after the advent of the automobile. Thus, U.S. cities lack density, violating a key tenet advanced by the Dutch for making flood control possible and affordable. To avoid future Harvey-scale events, the U.S. could do well to take a page from Holland and get ahead of flooding, rather than scrambling to recover from it.

It’s hard to keep a city dry if it’s huge. The reverse is also true, says Jeff Carney, director of the Coastal Sustainability Studio at Louisiana State University. When cities stack their housing up, rather than sprawling out, they are easier to defend and are more resilient.

One example of a well-stacked American city is New York, New York — aka the island of Manhattan. It’s compact, with more than 1.5 million people in fewer than 34 square miles of land, so flood-prevention efforts are feasible.

A couple of years ago, the New York City government allocated $100 million to build a flood barrier around the lower part of the borough, and the U.S. Department of Housing and Urban Development kicked in nearly twice that last year to ensure it becomes a reality.

“Lower Manhattan has the ability — because of the amount of people and the amount of economic value on the island — to build a wall around itself,” Carney says. “They can do infrastructure that Houston isn’t going be able to do. You’re not going to be able to pump water out of Houston. It’s just too big.”

Houston took a laissez-faire approach to development, essentially allowing people to build whatever — and wherever — they wanted. Aerts thinks the United States would benefit from a baseline urban-planning rule requiring some level of fortification against floods.

If government required a measure of flood protection, a lot of the low-lying development just wouldn’t pencil out economically. If you have to build a levee around a sprawling subdivision, it drives up construction costs, as well as home prices — and not because the neighborhood is suddenly hip. (Strangely, the Trump administration is moving in the opposite direction: Earlier this month it revoked an Obama-era rule mandating that potential future flooding be taken into account when constructing federally funded buildings.)

From a European perspective, American flood protection is astonishingly fragmented and ad hoc. Some U.S. cities use levees, drains, or pumps; others do nothing. Usually, Aerts says, cities build their protections only after a disaster. That’s the case in lower Manhattan, where the proposed flood-protection system is a direct response to Superstorm Sandy in 2012.

Still, prevention isn’t enough. Even if Houston had state-of-the-art infrastructure, according to Aerts, it would have flooded. “If we had 30 inches of rain in 12 hours, the Netherlands would flood as well,” he says. “And we have the biggest flood-safety system in the world.”

Nature can always overwhelm humanity’s efforts, and so we need backup plans.

When authorities issue a flood warning, people tend to focus on escaping by moving out of the area — getting in cars and driving away. But it’s much easier, and often safer, to go up, rather than out.

“If you can flee to a higher floor and stay there for days, you will be safe,” says Frans van de Ven, an engineer at the Dutch institute Deltares who helped New Orleans design new flood-control plans after Hurricane Katrina.

This works a lot better if the lights stay on, plumbing continues to work, and food in refrigerators stays fresh. So cities need to invest more to keep critical services above the water line, says van de Ven. If power plants and hospitals stay dry, electricity could continue to flow, and patients could be moved upstairs instead of out of town.

Apartment-dwellers like Louise Walker are exceptions to Houston’s single-family-home norm. When the water rose into her first floor apartment, Walker was able to bunk upstairs with her neighbor. This kind of “vertical evacuation” is often a better option than jamming freeways or evacuating people to convention centers, arenas, and megachurches.

Deltare’s van de Ven is less prescriptive about designing cities. He says governments have every right to build in floodplains, but they should require those houses to be constructed to withstand and mitigate floods, rather than making them worse by converting landscape that could absorb water into a bigger bathtub.

American cities have started requiring builders to pay for the problems they cause. Even Houston’s in on it. In 2010, it voted to start taxing landowners $3 for every 1,000 square feet of shingles and pavement that sheds water from their properties into the sewers. The tax is providing some money for the city to start beefing up its drainage system.

That’s good, but not good enough, van de Ven says. Because Houston is so flat, there’s nowhere for draining stormwater to go, and even the best system will be overwhelmed unless people can also capture water on their own lots.

Here’s where even the Dutch look elsewhere for inspiration. Singapore requires builders to create water-retention basins when constructing new homes.

“You dig a hole for a retention basin,” van de Ven says. “And you can use the soil from that hole to build a hill so your house is on higher ground.”

Jeroen Aerts says America focuses mostly on flood insurance — futher proof we prioritize recovery over thinking about preventing floods or how best to cope with seeing more of them.

“In general, America depends more on insurance and the self-reliance of individual citizens, which basically reflects the whole American way of thinking,” Aerts says.

That doesn’t mean that the only way to prepare for a future of floods is to go Dutch. If we want to eschew European-style centralized control in favor of free-market systems for flood management, that’s entirely possible, says van de Ven. But we have to lay the groundwork for those systems to work.

Right now, Carney says, the markets are failing because people don’t have enough information to make smart choices. For example, people are buying houses all over America without fully understanding how likely they are to lose them to floods.

“When you build a community on the wrong side of a levee and no one knows it — then people are making decisions with bad information,” he says.

For much of U.S. history, we’ve opted to clean up after floods rather than protect against them. But experts say that as the climate warms, more cities are taking the first steps to enacting the three pillars of Dutch flood protection.

“Of course we from the Netherlands are happy to help,” van de Ven says, when it comes to fortifying American cities for the future. “But it is up to you.”