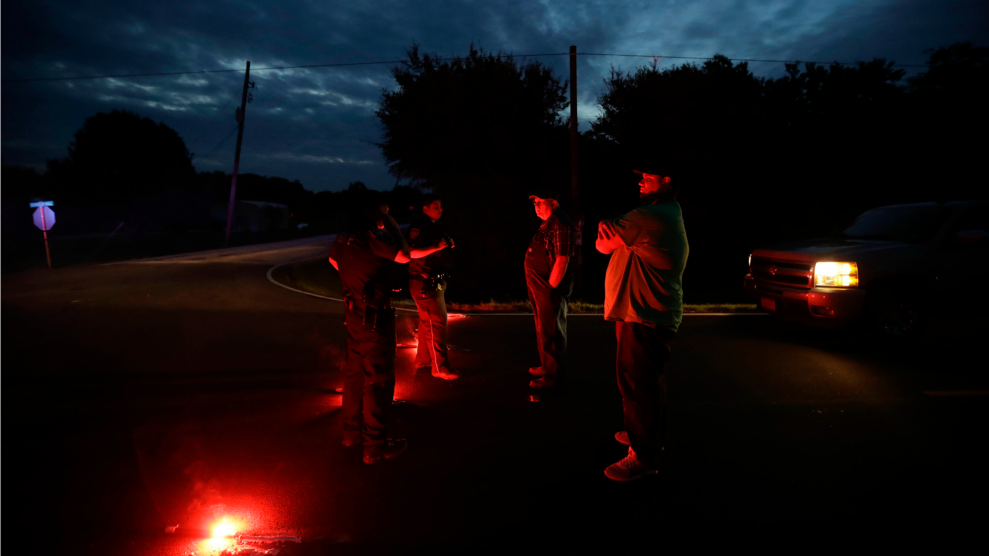 Police officers talked with men at a roadblock less than three miles from the Arkema plant fires. Gregory Bull/AP Photo

The most important information to have should you live near a chemical plant explosion—or inhale the fumes as 15 police officers have—is what kinds of chemicals are at risk of leeching into the air and water. Yet more than 24 hours after explosions at its plant 25 miles northeast of Houston, the global chemical manufacturer Arkema Inc. will not release a full inventory of its chemicals and where they are stored. Texas officials won’t either. The reason? Concerns about terrorism.

A few months ago, Environmental Protection Agency Administrator Scott Pruitt delayed an Obama-era rule that would give the public and first responders more information about the risks of accidents at facilities like Arkema’s. The rule, finalized days before Trump was inaugurated, would not have prevented the fires at Arkema, when the plant’s backup generators failed, but its proponents argue that safety could be improved at 12,000 similar facilities, going a long way to avert disasters from future inevitable storms (along with the smaller accidents that don’t gain national attention). The rule would have required stronger enforcement of company plans for safety measures should the worst case scenario strike. Implementation of the rule has been delayed by the Trump administration for another 20 months, awaiting reversal or significant rewriting. Pruitt has cited the national security dangers of providing information about these facilities, which then would inevitably override the public’s right to know about risks in their own backyards.

The rule—which has a clunky name, “Accidental Release Prevention Requirements: Risk Management Programs Under the Clean Air Act”—was an update of an existing EPA rule from the 1990s that required companies to have a risk management plan on file for dealing with accidents. With quantities of sulfur dioxide and methylpropene onsite, Arkema had such a plan on file and it contained warnings of an unlikely worst case scenario that its chemicals could become airborne and endanger some 1 million people, according to the Wall Street Journal.

Obama’s new rule laid out in more detail what specific information the companies should share with first responders who would need to know exactly the kind of special equipment required for putting out chemical fires. Just as importantly, it required the most dangerous industrial sectors, including chemical manufacturers and refineries, to do an assessment of safer alternatives and technologies in order to reduce the risk of an explosion. There’s no federal law that forces companies to pursue safer alternatives, and the closest this rule comes is added transparency, which Earthjustice attorney Gordon Sommers says would pressure companies in that direction.

“The explosion at Arkema really illustrates the need for this rule…to minimize the consequences of worst case scenarios which unfortunately happen far too often.”

“The explosion at Arkema really illustrates the need for this rule,” says Sommers, whose group has challenged the EPA delay. “I think this is exactly the type of thing its designed for: to minimize the consequences of worst case scenarios which unfortunately happen far too often.”

When the public was invited to comment on the Obama proposal, the EPA administrator, Arkema executives, and Texas regulators all cited similar reasons as to why the rule should be delayed, and why first responders should not have any access to what are considered to be company secrets. In July 2016, Pruitt and 10 other attorneys general asked then-EPA administrator Gina McCarthy to withdraw the proposed version of the rule:

Your proposed rule seeks to make readily-available to the public information that you believe might be useful to the public in the event of an accidental release of chemicals. As the federal agencies responsible for national security have warned you, compiling that information and making it easily accessible also aids those who might seek to cause an intentional release for nefarious purposes, by providing those bad actors with information that would help them both select a target and exploit any security vulnerabilities their target might have.

Arkema’s public comment to the EPA about the draft rule, dated May 2016, cited both the costs and security concerns of providing first responders with more information: “We have significant concerns with providing security-sensitive information where disclosure of such information could create a risk to tour sites and to the communities surrounding them,” a process safety engineer wrote on behalf of the company.

Environmentalists see this as an excuse to avoid regulation and disclosing important, even alarming, information to the public. “This concern that industry keeps repeating that releasing information about these hazards to first responders is somehow going to create a national security threat strikes me as offensive,” Sommers says, “because these are the people on the frontlines trying to stop these disasters.”

“This concern that industry keeps repeating that releasing information about these hazards to first responders is somehow going to create a national security threat strikes me as offensive.”

In addition to national security concerns, Arkema’s letter also cited the dual burdens of the requirement that it conduct an analysis of safer alternatives and undertake a third-party audit. Even before Thursday’s explosion, the CEO for North America acknowledged, “There is no way to prevent an explosion or fire.” Given the nature of Harvey, this explosion may not have been preventable, but the EPA rule was focused on lowering the risk of explosions in the longer run. For example, companies could keep smaller quantities of the most flammable and toxic chemicals onsite, or change their location. The new rule would have required companies to assess those options, the kind of analysis Arkema complained would be too burdensome.

The letter signed by Pruitt cited terrorist attacks as an “unfortunately common occurrence,” to justify withholding information like the kind that’s still secret in the Arkema fires. But accidents involving chemical facilities are also more common than you’d expect.  According to a 2014 report from the Environmental Justice and Health Alliance for Chemical Policy Reform, more than one-third of Americans live in “danger zones” near these facilities, and there are roughly 250 serious incidents in a typical year, involving death, injury, evacuation, or other serious damage.

Environmental justice advocates argue that a new approach to regulating is needed.

“Why isn’t anyone questioning these facilities that are known to have volatile toxic substances onsite? Should they even be this close to the coast when we know these storms are going to happen, and they’re getting stronger?” says Texas Environmental Justice Advocacy Services’ Bryan Parras. “We know that the mere fact of having these chemicals stored in a certain quantity puts these communities at risk.”