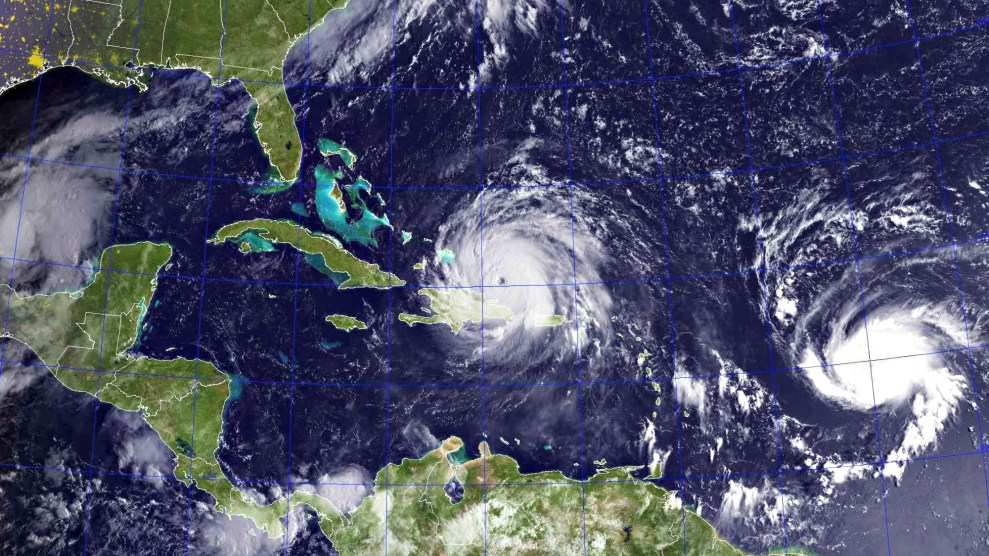 Hurricane Irma is making a beeline for Florida this weekend. Now a Category 4 storm, it is so big and has proved to be so devastating that Governor Rick Scott has advised the 20.6 million residents of the Sunshine State “to be prepared to evacuate soon.”

Florida’s vulnerability to a catastrophic storm has been obvious for years. Poor development planning, storm amnesia, a faulty insurance system, and a strong dose of climate-change denial have made coastal Florida, especially Miami and Tampa, much more vulnerable to Irma.

Miami was last hit by a hurricane close to Irma’s size in 1992, when Hurricane Andrew, a Category 5 storm, hammered the city. As the New York Times reported, “Central and South Florida have grown at a breathtaking pace since 1990, adding more than 6 million people. Glittering high-rises and condominiums keep sprouting up along Miami Beach and other coastal areas. A lot more valuable property now sits in harm’s way.” If a storm of the intensity of Hurricane Andrew struck today, the reinsurer Swiss Re estimated the physical damage in Miami alone would cost an additional $80 to $100 billion more than Andrew’s $26.5 billion.

In a 2013 World Bank and OECD analysis of 136 cities with the most property at risk to wind and storm surge, both Tampa and Miami were in the top ten, and sea level rise from climate change was not even included as a risk factor. In 2015, Tampa topped risk modeler RMS’s list for cities facing the greatest economic losses in a major storm. Its odds for billions in damages to the low-lying city were considered to be 1 in 80, compared to Miami (1 in 125), New York (1 in 200), and New Orleans (1 in 440).

There are a lot of reasons why the stakes are now so much higher than they used to be. Some are psychological, others are practical, and many are self-inflicted.

Denial is a powerful emotion and collectively many Floridians have bought into a kind of “magical thinking” that disaster won’t strike, despite living in low-lying territory, as my colleague Nathalie Baptiste once reported for the American Prospect. “People generally feel that disasters will not happen to them,” says Howard Kunreuther, the co-director of the University of Pennsylvania Wharton School’s Risk Management and Decision Processes Center. “As a result, people then get amnesia.”

“People generally feel that disasters will not happen to them—as a result, people then get amnesia.”

Add to this, short-term planning decisions by real-estate developers and homebuyers, who keep building in floodplains despite the known risks. The National Flood Insurance Program (NFIB) only manages to fuel this unwise building by promoting federal investment in these flood-prone areas. The NFIP has historically heavily subsidized even the homes that repeatedly flood, pouring billions into infrastructure that is unlikely to survive in the long-term.

Trump’s recent executive order reversing Obama’s elevated flood standards will only make bad federal planning worse, because it will mean federal disaster relief won’t necessarily take into account sea-level rise when funding redevelopment. On Friday, Trump’s Homeland Security advisor Tom Bossert suggested the White House may already be thinking of walking back its reversal of the stricter flood standards. Obama’s order in 2015 directed the government to incorporate resiliency planning into all its projects, but the recent change has reverted us to an unsustainable status quo, says insurance experts at the conservative R Street Institute.

Climate change has added to the problem, not just because the worsening storms are fueled by hotter oceans and rising seas. “If you’ve got a higher base level for the sea you’re obviously going to push more water on shore and at higher levels,” says US Geological Survey’s National Flood Hazard Specialist and Coordinator Robert Holmes. Nonetheless, Florida’s politicians tend to be overwhelmingly climate-change deniers, though there are some exceptions like Congressman Carlos Curbelo, a Republican who represents Miami. Governor Scott has reportedly gone so far to limit discussion of climate change in his administration, as officials in Florida’s Department of Environmental Protection claimed in 2015.

Irma is a Category 4 storm because of its winds, but its storm surge, the wall of water that may end up reaching well over 10 feet, is likely to be far more deadly. “Wind speed is going to be indicative of what it does to the structure or tearing down house,” says Holmes. “But storm surge is the real killer. The large number of the deaths from hurricanes isn’t from the wind. It’s from people drowning.”

Among large cities, Tampa and Miami are especially susceptible to a deadly storm surge. It doesn’t help that their governor has not considered all the ways they are threatened, saying only, he’s “not a scientist” when it comes to climate change.