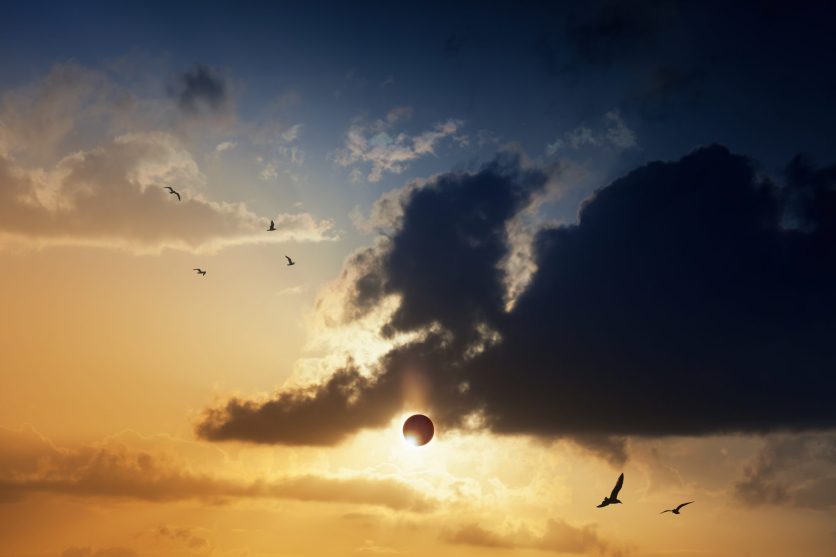 When the sun slips behind the moon’s shadow on Monday, August 21, during the total solar eclipse, people will be eagerly positioning themselves for the best view of the event. (Don’t forget your solar-filtered glasses!) But what about how it will sound? In one of the earliest scientific recordings of a total eclipse in 1544, observers noted that “birds ceased singing,” according to the American Academy of Arts and Sciences.

Scientists have long been noting surprising animal reactions to eclipses, usually jotting down these observations into the sidebars of their notepads while they are conducting astronomical studies. But very few formal studies exist. This year, the California Academy of Sciences is asking eclipse watchers to download an app and record animal and plant reactions on August 21 to contribute to their “Life Responds” project. (Full instructions on how to be a citizen scientist here.) Until then, here’s a glimpse into how animals have reacted to untimely darkness so far:

1560: Scientists observed that “birds fell to the ground,” according to a record uncovered by the American Academy of Arts and Sciences.

July 1851: An army of ants, “busily carrying their burdens, stopped and remained motionless until the light reappeared” in Sweden.

1900: Pigeon’s enjoying an afternoon snack became “disturbed and alarmed,” reported a doctor in Portugal. They stopped eating, “stretching their necks upward to the sky as if apprehensive of the approach of some bird of prey. When the sun reappeared, they recommenced eating.”

August 1932: The American Academy of Arts and Sciences conducted what they believed to be the first comprehensive study on animal behaviors during a total eclipse. Calling for reports from the general public, the game wardens and naturalists in New England, where the eclipse was visible, received nearly 500 observations. Painted turtles in a Massachusetts zoo took shelter as if it was nighttime and there were numerous reports of canaries going to roost. A zoo employee in Nashua, New Hampshire said that 45 minutes before the eclipse “pythons were very lively, more so than they have been at any time this summer.” And in Cape Cod, Massachusetts, one citizen observed skunks, normally nocturnal animals, leave their dens during the darkness of the eclipse (which occurred in the afternoon). When the light returned, they quickly scurried to shelter.

1955: A study out of India analyzed bees’ response to a partial solar eclipse and noted that they became restless in and around the hive. When the eclipse was at its peak, beehive activity increased 760 percent.

September 1969: European researchers studied one male antelope ground squirrel on the roof of a University of California-Los Angeles science building, and how often it used its activity wheel in the days before, during, and after a partial eclipse. The day of the eclipse sent the squirrel into a high-endurance workout session—resulting in the longest periods of activity recorded throughout the entire study. “With the onset of the eclipse, session lengths increased to over three times normal and active time,” and continued at “levels far above normal.”

July 1991: Cicadas ceased singing during a partial eclipse in Arizona, according to scientists from Barry University’s School of Natural Health and Sciences and the University of Illinois’ Department of Physiology and Biophysics. The researchers suspected that because most cicadas rely on radiant energy to maintain activity, when the temperature dropped a few degrees, the cicadas no longer had enough body heat to sing.

July 2009: Three researchers in India, interested in how eclipses affect animals’ basic habits, focused on the activity of blue bull, a large antelope that originated in Asia, during a partial solar eclipse. They found that during the eclipse, the male bulls got lazier and the females became more active.

What will happen on Monday? Keep an eye on the ground—and report any unusual animal activity to citizen science projects like this one.