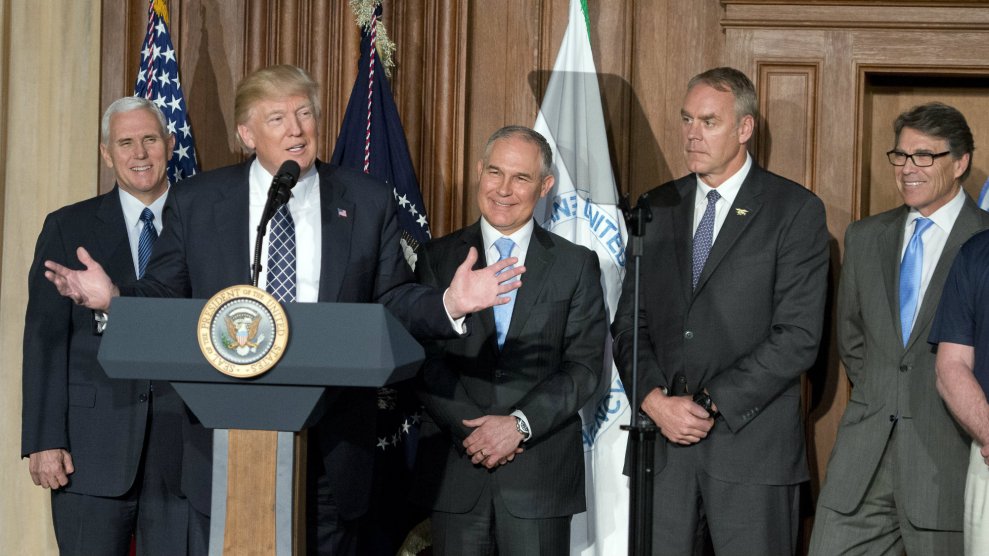 There’s little doubt: The climate is changing, human activity is accelerating the process, and the U.S. is already feeling its effects, according to an expansive climate report that dozens of government scientists drafted.

The nonprofit Internet Archive first uploaded the 543-page report, which is awaiting the Trump administration’s approval, in January. But the third-order draft of the Global Change Research Program Climate Science Special Report only garnered mainstream attention after The New York Times published it inside an article Monday.

The National Academy of Sciences has already endorsed the draft report, but many scientists ― including some of the paper’s authors—have expressed concern that Trump officials might rewrite or suppress the findings.

Despite this report (and piles of evidence from previously published studies), Trump administration officials have continued to push a narrative that claims scientists are unsure whether human activity has significantly increased the rate of global warming in recent years.

Here are six statements the Trump team has made about climate change that have no basis in reality, as evidenced by the federal climate science report:

“I’m not a believer in man-made global warming. It could be warming, and it’s going to start to cool at some point.” (September 2015)

What the science actually shows: The science is clear that man-made global warming is not only real, but also one of the greatest threats that humanity faces.

People have released so much greenhouse gas into the atmosphere that the planet will continue to warm for at least the next 100 years—even if carbon emissions caused by human activity immediately cease.

From the federal report:

The last few years have also seen record-breaking, climate-related, weather extremes, as well as the warmest years on record for the globe. …

Global climate is projected to continue to change over this century and beyond. Even if humans immediately ceased emitting greenhouse gases into the atmosphere, existing levels would commit the world to at least an additional 0.5 degrees Fahrenheit over this century relative to today. …

The magnitude of climate change beyond the next few decades depends primarily on the amount of greenhouse (heat trapping) gases emitted globally and the sensitivity of Earth’s climate to those emissions. …

Longer-term climate records indicate that average temperatures in recent decades over much of the world have been much higher than at any time in the past 1700 years or more.

“Record low temperatures and massive amounts of snow. Where the hell is GLOBAL WARMING?” (February 2015)

What the science actually shows: There may be some outlier days, but overall, climate change has caused extremely cold days to become warmer and it’s increased the frequency of “extreme heat events,” according to the latest report.

The frequency and intensity of heavy precipitation and extreme heat events are increasing in most regions of the world. These trends are consistent with expected physical responses to a warming climate and with climate model studies, although models tend to underestimate the observed trends. The frequency and intensity of such extreme events will very likely continue to rise in the future. …

The increase in extreme weather that accompany global climate change are having significant, direct effects on the United States and the global economy and society.

“Measuring with precision human activity on the climate is something very challenging to do. And there’s tremendous disagreement about the degree of impact. So no, I would not agree that it’s a primary contributor to the climate change.” (March 2017)

What the science actually shows: There’s virtually zero disagreement among federal climate scientists that human activity is not only a factor, but also the “dominant cause” driving the relatively recent and dramatic acceleration of global warming. This finding is repeated throughout the report.

Human activities are now the dominant cause of the observed changes in climate. …

The global climate continues to change rapidly compared to the pace of the natural changes in climate that have occurred throughout Earth’s history. …

Many lines of evidence demonstrate that human activities, especially emissions of greenhouse gases, are primarily responsible for the observed climate changes in the industrial era. There are no alternative explanations, and no natural cycles are found in the observational record that can explain the observed changes in climate.

Ryan Zinke, Secretary of the Interior:

Glaciers in Montana started melting “right after the end of the Ice Age” and it’s been “a consistent melt.” (June 2017)

What the science actually shows: Scientists have already debunked Zinke’s claim that Glacier National Park’s namesake feature has been melting consistently since “right after the end of the Ice Age.” Glaciers have generally retreated since about 1850, the end of the Little Ice Age, but global warming has caused the rate of retreat to increase in recent decades.

Observations continue to show that Arctic sea ice extent and thickness, Northern Hemisphere snow cover, and the volume of mountain glaciers and continental ice sheets are all decreasing. In many cases, evidence suggests that the net loss of mass from the global cryosphere is accelerating. …

The annually averaged ice mass from global reference glaciers has decreased every year since 1984, and the rate of global glacier melt is accelerating. This mountain glacier melt is contributing to sea level rise and will continue to contribute through the 21st Century.

“The evidence strongly suggests that humans have had an influence on higher CO2. However, the evidence is equally as strong that there are other factors, such as rising ocean temperatures, that have a greater influence.” (August 2014)

What the science actually suggests: As we should all know by now, carbon emissions released by human activity are the “dominant cause” of accelerated global warming. Ocean temperatures are rising, but that’s because humans are emitting more greenhouse gases in the atmosphere.

The world’s oceans have absorbed more than 90% of the excess heat caused by greenhouse warming since the mid 20th Century, making them warmer and altering global and regional circulation patterns and climate feedbacks. Surface oceans have warmed by about 0.45°F (0.25°C) globally since the 1970s. …

The world’s oceans are currently absorbing more than a quarter of the carbon dioxide emitted to the atmosphere annually from human activities, making them more acidic with potential detrimental impacts to marine ecosystems. The rate of acidification is unparalleled in at least the past 66 million years.

“Most likely the primary control knob [for the temperature of the Earth and for climate] is the ocean waters and this environment that we live in.” (June 2017)

What the science actually shows: Like Zinke, Perry downplayed humans’ role in global warming and blamed “ocean waters” instead. Perry also appeared to suggest that the environment is responsible for changes in the environment, which is somewhat challenging to make sense of.

It’s possible he was referring to previously natural variability, such as El Niño and La Niña, though the draft report found such phenomena have “limited influences” on long-term climate change. Some studies have suggested man-made global warming may “greatly increase the frequency of very strong” El Niño or La Niña events.

Since the industrial era, human emissions of carbon dioxide (CO2), methane (CH4), and other greenhouse gases now overwhelm the influence of natural drivers on the external forcing of the Earth’s climate… For this reason, projections of changes in Earth’s climate over this century and beyond focus primarily on its response to emissions of greenhouse gases, particulates, and other radiatively-active species from human activities. …

Natural variability, including El Niño events and other recurring patterns of ocean−atmosphere interactions, have important, but limited influences on global and regional climate over timescales ranging from months to decades.

Read the full draft of the climate report here.