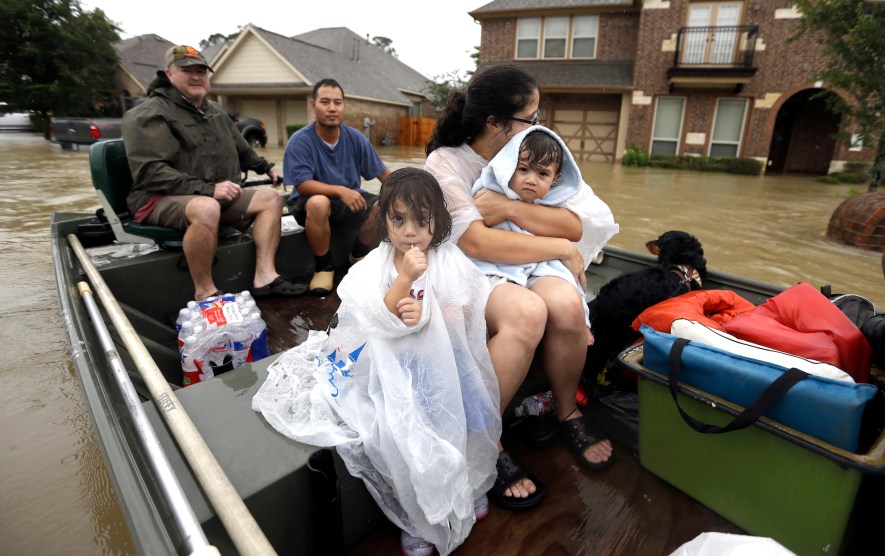 A family is evacuated from their home as floodwaters from Tropical Storm Harvey rise Monday, Aug. 28, 2017, in Spring, Texas. David J. Phillip/AP

With the worst of Hurricane Harvey’s destruction yet to be seen, two new laws—one that will limit the right of homeowners to sue insurance companies, and another that aims to crack down on sanctuary cities and undocumented immigrants—will go into effect in Texas on Friday. Both carry the potential to seriously harm vulnerable residents in the state already battered by the catastrophic storm, and some lawmakers are calling for a special session to roll back the implementation date of both measures.

The relatively obscure law, House Bill 1774, was passed in May and is designed to discourage so-called “abusive” lawsuits that occur when policyholders sue insurance companies over certain weather-related claims. Proponents say the law will target scams and frivolous lawsuits that have caused insurance premiums to skyrocket in the state. But critics argue that the law guts important homeowners’ protections, while relieving insurance companies from having to pay for penalties such as late fees incurred with overdue insurance claims.

The law has become especially relevant this week, when Texans attempt to assess the colossal damage in Harvey’s wake, and forecasters predict the state will be battered by a second wave of flooding mid-week. Displaced Texans may be unable to return home before the law’s September 1 implementation.

Some lawmakers are now calling for a special legislative session in order to delay the law from going into effect before the full extent of Harvey’s catastrophic damage can be assessed:

The Texas Legislature should be called into Special Session before September 1 to delay implementation of HB1774. #Harvey

SB 4 already has received national attention thanks to the Trump administration’s crackdown on illegal immigration. The Texas law will allow police officials to inquire about a person’s immigration status once they are legally detained. It also targets so-called sanctuary cities—Austin, for instance—that refuse to cooperate with federal efforts to lock up undocumented immigrants. Immigration groups fear that the law will dissuade undocumented immigrants from seeking government assistance both during the storm and in its aftermath.

“I don’t care who you are, I don’t care what your status is,” Turner told reporters. “I do not want you to run the risk of losing your life or a family member because you’re concerned about SB 4 or anything else.”

He added: “If someone comes and they require help and then for some reason [someone] tries to deport them, I will represent them myself.”

Despite the encouraging message, the state’s border patrol stations have remained open for business during the storm.

If you don't want people to risk their lives, don't make undocumented and mixed status families choose between safety and checkpoints. https://t.co/xOQkMgoRME