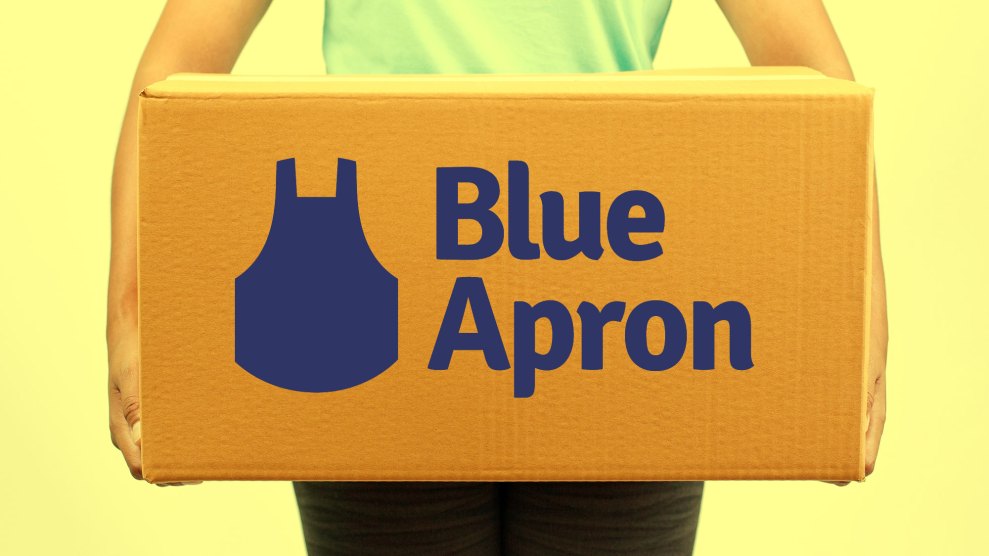 People love to complain about the wastefulness of meal-kit delivery companies like Blue Apron and Hello Fresh. The baggies that hold a single scallion! The thousands of miles of shipping! The endless cardboard boxes! Those problems are annoying, but ultimately they’re not environmental catastrophes: The baggies don’t take up all that much landfill space, the cardboard boxes are recyclable, and it’s not clear whether shipping meal kits is less efficient than transporting food to grocery stores and then to homes.

Blue Apron has a take-back program, but the company won’t say whether it’s actually reusing any of the freezer packs it’s taking back—or simply storing them in a warehouse.

But there is a much better reason to criticize meal-kit companies—and as far as I can tell, few people are talking much about it. That’s surprising, because it’s actually the biggest (or heaviest, at least) thing in every meal-kit box: the freezer packs that keep the perishables fresh while they’re being shipped. Blue Apron now sends out 8 million meals a month. If you figure that each box contains about three meals and two six-pound ice packs, that’s a staggering 192,000 tons of freezer-pack waste every year from Blue Apron alone. To put that in perspective, that’s the weight of nearly 100,000 cars or 2 million adult men. When I shared those numbers with Jack Macy, a senior coordinator for the San Francisco Department of the Environment’s Commercial Zero Waste program, he could scarcely believe it. “That is an incredible waste,” he said. The only reason he suspects he hasn’t heard about it yet from the city’s trash haulers is that the freezer packs end up hidden in garbage bags.

Given that many meal-kit companies claim to want to help the planet (by helping customers reduce food waste and buying products from environmentally responsible suppliers, for example), you’d think they would have come up with a plan for getting rid of this ever-growing glacier of freezer packs. Au contraire. Many blithely suggest that customers store old gel packs in their freezers for future use. Unless you happen to have your own meat locker, that’s wildly impractical. I tried it, and in less than a month the packs—which are roughly the size of a photo album—had crowded practically everything else out of my freezer. Two personal organizers that I talked to reported that several clients had asked for a consult on what to do with all their accumulated freezer packs.

As Nathanael Johnson at Grist points out, Blue Apron has also suggested that customers donate used freezer packs to the Boy Scouts or other organizations. I asked my local Boy Scouts council whether they wanted my old meal-kit freezer packs. “What would we do with all those ice packs?” wondered the puzzled council executive. (Which is saying a lot for an organization whose motto is “be prepared.”)

The meal-kit companies’ online guides to recycling packaging are not especially helpful. (Blue Apron’s is visible only to its customers.) Most of them instruct customers to thaw the freezer packs, cut open the plastic exterior, which is recyclable in some places, and then dump the thawed goo into the garbage. (Hello Fresh suggests flushing the goo down the toilet, which, experts told me, is a terrible idea because it can cause major clogs in your plumbing.) The problem with this advice is that it does not belong in a recycling guide—throwing 12 pounds of mystery goo into the garbage or toilet is not recycling.

To its credit, Blue Apron is the only major meal-kit service to offer a take-back program: Enterprising customers can mail freezer packs back to the company free of charge. But Blue Apron spokeswoman Allie Evarts refused to tell me how many of its customers actually do this. When I asked what the company does with all those used freezer packs, Evarts only told me, “We retain them for future use.” So does that mean Blue Apron is actually reusing the packs in its meal kits, or is there an ever-growing mountain of them languishing in a big warehouse somewhere? Evarts wouldn’t say.

Now back to that mystery goo, which, in case you’re curious, is whitish clear, with the consistency of applesauce. Its active ingredient is a substance called sodium polyacrylate, a powder that can absorb 300 times its weight in water. It’s used in all kinds of products, from detergent to fertilizer to surgical sponges. One of its most common uses is in disposable diapers—it’s what soaks up the pee and keeps babies’ butts dry. When saturated with water and frozen, sodium polyacrylate thaws much more slowly than water—meaning it can stay cold for days at a time.

The stuff inside freezer packs is made from the same stuff as fossil fuels, and it doesn’t biodegrade.

Meal-kit companies assure their customers that the freezer-pack goo is nontoxic. That’s true. But while sodium polyacrylate poses little to no danger to meal-kit customers, it’s a different story for the people who manufacture the substance. (Meal-kit companies typically contract with freezer-pack manufacturers rather than making their own.) In its powdered state, it can get into workers’ lungs, where it can cause serious problems. The Centers for Disease Control and Prevention noted in 2011 that workers in a sodium polyacrylate plant in India developed severe lung disease after inhaling the powder. Animal studies have shown that exposure to high concentrations of sodium polyacrylate can harm the lungs. Because of these known risks, some European countries have set limits on workers’ exposure to sodium polyacrylate. Here in the United States, some industry groups and manufacturers recommend such limits as well as safety precautions for workers like ventilation, respirators, and thick gloves. But on the federal level, neither the Occupational Safety and Health Administration nor the National Institute for Occupational Safety and Health have any rules at all. (The companies that supply freezer packs to Blue Apron and Hello Fresh did not return repeated requests for information on their manufacturing processes.)

Beyond the factory, sodium polyacrylate can also do a number on the environment. In part, that’s because it’s made from the same stuff as fossil fuels—meaning that making it produces significant greenhouse gas emissions, a team of Swedish researchers found in 2015 (PDF). It also doesn’t biodegrade, so those mountains of freezer packs sitting in the garbage aren’t going anywhere anytime soon.

So to review: Freezer packs create an epic mountain of garbage, and their goo is not as environmentally benign as meal-kit companies would have you believe. So what’s to be done? One place to start might be a greener freezer pack. That same team of Swedish researchers also developed a sodium polyacrylate alternative using biodegradable plant materials instead of fossil fuels. A simpler idea: Companies could operate like milkmen used to, dropping off the new stuff and picking up the old packaging—including freezer packs—for reuse in one fell swoop.

A little creative thinking might go a long way—yet none of the companies that I talked to said they had any specific plans to change the freezer-pack system (though Hello Fresh did say it planned to reduce its freezer pack size from six pounds to five pounds). And when you think about it, why should they fix the problem? Heidi Sanborn, head of the recycling advocacy group California Product Stewardship Council, points out that the current arrangement suits the meal-kit providers just fine. “It’s taxpayers that are paying for these old freezer packs to sit in the landfill forever,” she says. “Companies are getting a total freebie.”