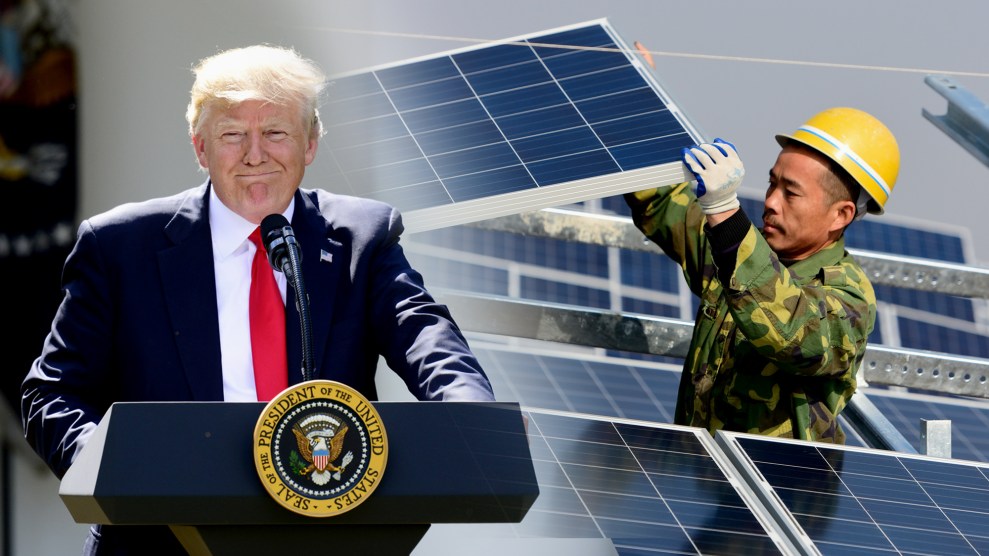 President Donald Trump announced Wednesday afternoon that the US will abandon the historic Paris climate agreement—promising to “begin negotiations to re-enter either the Paris accord or an entirely new transaction on terms that are fair to the United States.”

In doing so, Trump characteristically railed against China—labeling it an economic foe and arguing it got the best end of the deal. “They can do whatever they want in 13 years, not us,” he said of China’s emissions plans. Casting the deal as an erosion of US sovereignty, Trump added that “the rest of the world applauded when we signed the Paris agreement. They went wild. They were so happy. For the simple reason that it put our country, the United States of America, which we all love, at a very, very big economic disadvantage.”

But here’s the reality: In the Paris agreement, China, for the first time, set a date at which it expects its climate emissions will “peak,” or finally begin to taper downward: around 2030. That goal came about after the US and China finally brokered a landmark bilateral climate deal in 2014 to work together. China has always argued it’s unfair for developed countries—who have already enjoyed the economic growth that comes with spewing carbon into the atmosphere—to curtail the growth of developing countries like China. So getting China to agree to “peaking” emissions was a major diplomatic break-through that turned out to be the secret sauce the world needed to come together in Paris.

The president’s view of China is outdated. Here’s what Trump left out:

China is already ahead of schedule. As we reported in March 2016, Chinese emissions may have actually peaked in 2014, and if those emissions didn’t peak in 2014, researchers say, they definitely will by 2025, years ahead of China’s official 2030 goal. Chinese coal consumption dropped 3.7 percent in 2015, marking two years in a row that coal use in the country declined. That meant 2015 was the first year in 15 years that carbon emissions dropped in China, according to the World Resources Institute.

China is far surpassing the US on investment to create clean energy jobs. In February, China announced that it would spent $361 billion over the next couple of years to create 13 million green jobs, according to the country’s National Energy Administration.

China is winning on clean energy technology. In 2016, a Chinese firm topped a global ranking for wind energy production for the first time, beating America’s General Electric. China leads the world in solar energy production—and has done so for some time. (Go inside one of the world’s biggest solar manufacturing plants with me, here.)

China overtook the US as the world’s biggest market for electric vehicles in 2015—and has a big plans for expansion. “We are convinced China will become the leading market for electro-mobility,” said Volkswagen brand chief Herbert Diess at a recent Shanghai car show.