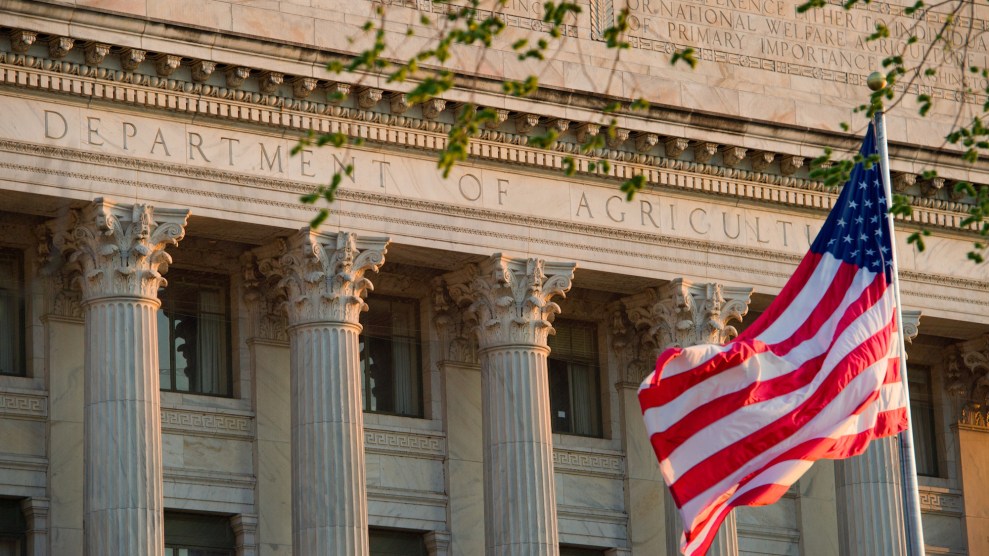 US Department of Agribusiness? <a href="http://www.gettyimages.com/license/492025221">OceanFishing</a>/iStock

President Donald Trump and his agriculture secretary, Sonny Perdue, are finally getting around to staffing key positions at the US Department of Agriculture, reports the trade journal AgWeb. Surprising no one who watched the chaotic process that finally ended with Trump settling on Perdue as USDA chief, the rumored picks to fill top USDA roles are a bunch of agribiz flacks and political hacks.

All the reported picks are strong supporters of opening export markets for overproduced US farm goods like soybeans and pork. That’s also predictable, since reassuring Big Ag about overseas sales is one of the reasons Trump backed down on nixing the North American Free Trade Agreement—a decision reportedly made after Perdue himself showed Trump an electoral map suggesting job losses in states that he won.

Trump “left me with questions about his moral center and his foundational beliefs…His comments reveal no foundation in Christ, which is a big deal,” Clovis wrote in an email.

• Sam Clovis, a right-wing Catholic who served as national chief policy adviser for Trump’s presidential campaign. According to AgWeb and ProPublica, Clovis will soon be named USDA undersecretary for research, education, and economics. In 2008, Congress stipulated that the job’s holder would serve as the agency’s “chief scientist,” to be chosen from and be “among distinguished scientists with specialized or significant experience in agricultural research, education, and economics,” ProPublica notes.

Clovis, by contrast, is a confirmed climate skeptic with a doctorate in public administration who until recently taught business, management, and public policy classes at Morningside, a small liberal-arts college in Iowa, and hosted a right-wing radio show. He has also worked for the defense contractor Northrop Grumman. Here’s more on his rather slim academic credentials—which have nothing at all to do with the science or even economics of agriculture.

Clovis wasn’t always a Trump man. Initially, he served as Iowa state campaign chair for former Texas governor and current US Energy Secretary Rick Perry’s failed bid for the 2016 GOP presidential nomination. After jumping ship to Trump, Clovis had to answer for scathing anti-Trump emails he had written while working for Perry. Trump “left me with questions about his moral center and his foundational beliefs…His comments reveal no foundation in Christ, which is a big deal,” he wrote in one, according to the Des Moines Register. Clovis “verified that he’d written the sharply worded criticisms of Trump, including one email in which he praises Perry for calling Trump a ‘cancer on conservatism,'” the Register reported.

• Steve Censky, CEO of the American Soybean Association. If reports are correct that Censky will be named deputy undersecretary—the USDA’s No. 2 position behind Perdue—it won’t be his first strut through the revolving door between the agribiz industry and the department that supposed to regulate it. Before his current 21-year stint as the big cheese for Big Soybean, Censky worked in DC, holding posts in the USDA under Ronald Reagan and George H.W. Bush. The American Soybean Association is officially a farmer’s group, but it’s intimately tied to agribusiness. Every year, the ASA, along with the corn and wheat trade groups, holds a massive trade show called the Commodity Classic, sponsored by Monsanto, Syngenta, DuPont, and other agribiz heavyweights.

McKinney cited “divine intervention” as one of the his motivations for abandoning corporate life for government work.

• Ted McKinney, state agriculture director of Indiana and former agribusiness exec. For a brief moment in January, McKinney rose to the top of Trump’s short list for USDA secretary, before ultimately being passed over for Perdue; and I did a whole post on him. Now that he’s reportedly about to be named USDA undersecretary for trade and foreign agricultural affairs, here are some highlights:

Back in 2013, Indiana’s then-governor, current Vice President Mike Pence, appointed McKinney to lead the state’s ag department, plucking him from the executives suites of Elanco Animal Health, the division of of pharma giant Eli Lilly that sells drugs to meat producers. Before that, McKinney served for years as an executive on the government affairs team for seed/pesticide giant Dow AgroSciences. Mckinney is also a co-founder and served as interim executive director for the Council for Biotechnology Information, a group funded by BASF, Bayer, Dow AgroSciences, DuPont, Monsanto, and Syngenta to promote agriculture biotech.

Like Clovis and Perdue—who as governor of Georgia once resorted to prayer to end a drought—McKinney is deeply religious. Addressing an Indiana pork industry confab after taking the Indiana Department of Agriculture job, McKinney cited “divine intervention” as one of his motivations for abandoning corporate life for government work. After getting the call from Pence, he explained, “my wife and I prayed about it, it just seemed right. I took the plunge, and here we are…and I’m having a ball!”