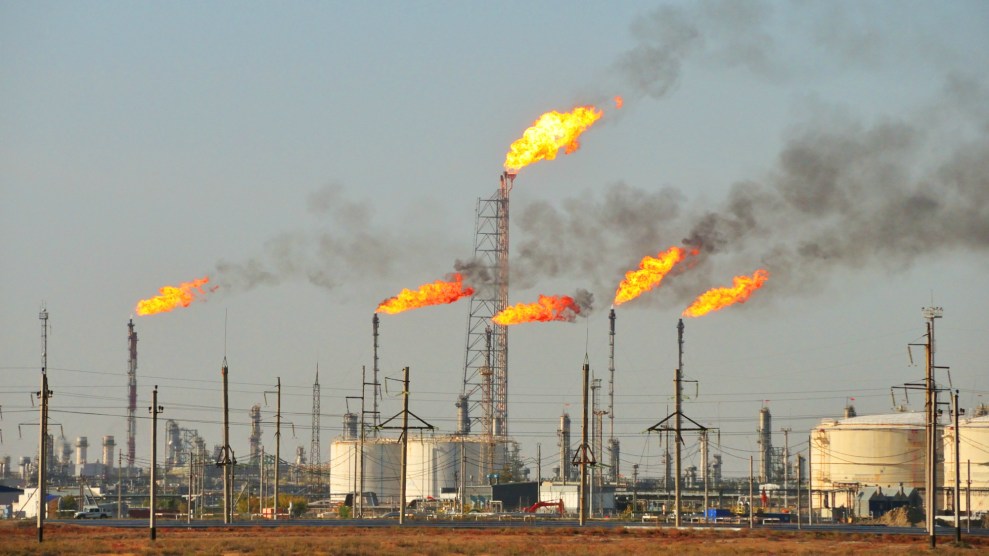 With budget battles and promised tax reform ahead, President Donald Trump is running out of time to claim legislative wins. Especially since most of them have been from his rollback of environmental regulations put forward during the waning days of the Obama administration.

So far, Trump has signed 11 bills using the Congressional Review Act, a 1996 law that lets Congress overturn federal rulemaking with a simple majority vote. Republicans have been striking down Obama-era regulations that were anathema to the oil, gas, and coal industries, among them an Environmental Protection Agency rule protecting streams from coal debris, an anti-bribery rule requiring oil companies to disclose foreign payments, and an obscure Bureau of Land Management rule updating land management guidance. The White House this week celebrated its triumphs during a press call in which legislative director Marc Short insisted, “If you take in totality what we’ve been trying to do on the regulatory front, it is a news story.”

But there is a limit for this legislative free-for-all. Use of the CRA is time-limited to 60 congressional working days, so the opportunity to use the CRA to repeal rules from the Obama administration that stretch back to mid-2016 will end around mid-May. And one environmental executive order that should have been a slam dunk is in trouble. The bill to overturn a methane regulation for public lands that has been long disliked by the oil and gas industry has stalled in the Senate. A number of moderate and Western state Republican senators have worried about the implications of permanently restricting the Interior Department’s ability to regulate methane emissions.

“They feel it’s important to wipe out the chance for any regulation to happen ever again.”

Methane is a powerful greenhouse gas released by natural gas, landfill, and agricultural industries. It is far more potent (86 times) than carbon over the short term (of 20 years). By letting methane leak into the atmosphere, humans aren’t just supercharging global warming or letting toxic chemicals escape; natural gas is also leaking, which means lost money for the industry and taxpayers.

The bill to repeal the methane rule passed the House in February. Advocates warned it could pass the Senate as far back as February. But it hasn’t, for the simple reason that in this case, Republicans don’t have the votes.

The part of the CRA that worries opponents most isn’t how it chips away at Obama’s legacy, but that it permanently restrains the agency’s ability to put forward a “substantially similar” regulation in the future. The permanent nature of the CRA means that successful bills are blocking any future updates to these rules, including limiting the ability of BLM to update its guidance on leasing and land use. That, for Sen. Lindsey Graham (R-S.C.), is “too blunt an instrument in this case,” according to The Hill. “I think we can replace it with a better reg, rather than a CRA,” he said. Sen. Susan Collins (R-Maine), who’s broken with her party on energy votes before, is “leaning against” it. Multiple Western senators including Cory Gardner and Rob Portman were undecided as of late March.

“As we were here on the ranch we began to notice that each well in itself is a little pollution hub.”

“If the methane rule is overturned, for example, can the BLM ever again regulate methane pollution on public lands?” Center for American Progress senior fellow Matt Lee-Ashley said. “That’s an open question courts will have to figure out.” The CRA is largely uncharted legal territory, so it’s unclear just how the term “substantially similar” would be interpreted by courts.

Regardless, Republicans have lined up dozens of rules that could be rolled back from the Obama era, and contrary to the claims that these were “midnight” rules pushed out by Obama, many stretch back to May 2016, thanks to the peculiarities of the Senate calendar and were in the works for years before being finalized.

That’s the case for the methane rule. The Western Congressional Caucus, echoing the American Petroleum Institute, described it as a “duplicative,” “midnight” rule pushed out by Obama in his final days. In reality the rule was in the works since early 2014, with thousands of public comments and  public forums held around the country. Advocates of the rule argue that some conservatives might be balking because the rule is inherently moderate and polls show public support. “The idea that conservatives would be attacking a waste reduction measure is kind of bizarre,” the Wilderness Society’s deputy director of energy and climate, Josh Mantell, told Mother Jones.

Nevertheless, the lobbying wars over it have been fierce, and CAP cites the major oil contributions to the members who are sponsoring the resolution as one reason this has emerged as a priority early in the session. The oil industry argues it has every incentive to limit methane on its own because restraints cut down on wasted natural gas. But cheap plentiful gas has provided the industry with little incentive to upgrade equipment, and by extension, oil companies avoid paying royalties on the lost gas.

Don Schreiber, a rancher whose property stands in the center of the San Juan basin gas field, has been on edge watching Congress to see what will happen to this energy regulation some Republicans are so eager to repeal. “It’s been put off and put off and put off,” Schreiber told me. When I called, he was on his ranch, at the center of one of the hottest areas for oil and gas development. He could spot up to seven wells visible from his property and another 122 natural gas wells surrounding him, earning the area the distinction of being first in per capita methane emissions in the country.

He became an activist after purchasing the ranch in 1999. He had grown wary of seeing the gas flares, smelling the associated toxic chemicals, and having to calibrate the direction of the wind every day. “As we were here on the ranch, we began to notice that each well in itself is a little pollution hub,” affecting wildlife, nature, and health, he said.

The Trump administration has other ways to handicap the rule, including through his recent executive order targeting regulation of the fossil fuel industry. But there is a big difference between Trump doing this through the agency and through the CRA: The agency would require a more formal process, one with public input, as opposed to a single congressional vote striking it down. Environmentalists are keeping close watch on what Trump is doing to undermine the rule, which could lead to legal action.

“There are ways to amend, to rewrite, and even repeal regulations that wouldn’t tie the hands of agencies going forward,” Mantell said. “But because this party—and the industry that is pushing a lot of these—is so against the idea of regulation in general, they feel it’s important to wipe out the chance for any regulation to happen ever again.”

As a property owner who had hoped to develop a sustainable cattle ranch in the middle of oil and gas country, Schreiber notes the importance of taking first steps to clean up methane. He’s worried his home is “now infamous for the methane hot spot having a huge impact on climate change—in the wrong direction.”

“The Clean Water Act didn’t make all the rivers clean,” he says. “It began to clean it up.” By tackling methane one rule at a time, Schreiber hopes the same will happen with the oil and gas industry.