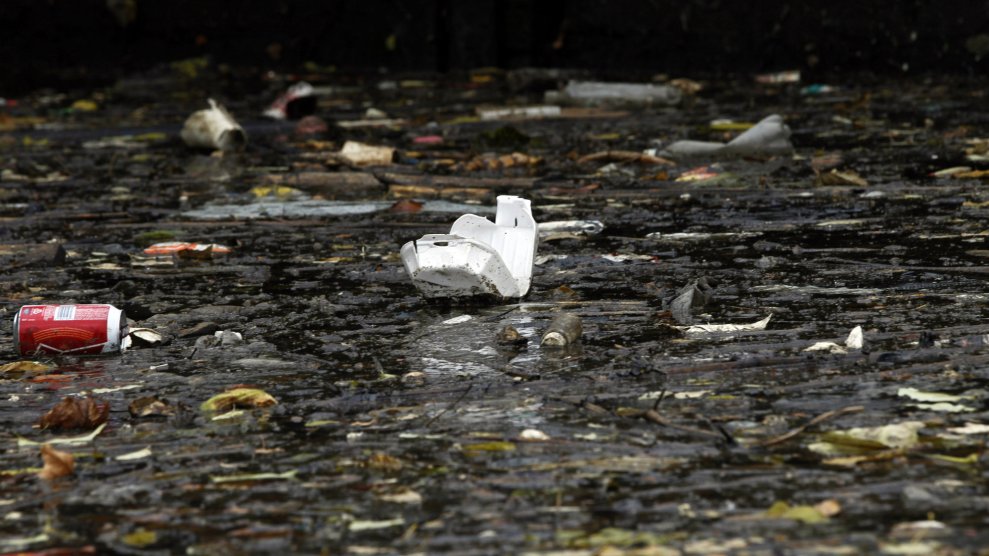 When the White House unveiled its proposed budget for the upcoming year, environmentalists were outraged by the numbers. The Environmental Protection Agency is facing a steep 31 percent budget cut, and included in this were massive cuts to Superfund, a 37-year-old EPA program that cleans up and restores heavily polluted areas across the country. The proposal calls for reducing funding for the Superfund program from over $1 billion to just $762 million.

Superfund was created through the Comprehensive Environmental Response, Compensation, and Liability Act in 1980 on the heels of the Love Canal disaster, when a massive landfill that was used as a municipal and chemical dumping ground caused countless environmental and health problems for an entire upstate New York community, including homes and a school. More than 1,700 sites have been added to the list since 1980, but as of 2013, only 370 had been cleaned up and removed from the list. The overwhelming majority continue to be in different stages of cleanup. One example is East Chicago, Indiana, which EPA Administrator Scott Pruitt plans to visit on April 19. The town, which is mostly low-income, Latino, and black, is home to a USS Lead Superfund site—the old lead facility has contaminated soil with lead and arsenic.

But the Trump budget proposal could impede this progress and leave millions of Americans living near dangerous pollutants. “These sites pose devastating threats to the health of millions of people, including children, who live nearby,” Nancy Loeb, the director of the Environmental Advocacy Center, wrote in an op-ed for The Hill.

“These sites pose devastating threats to the health of millions of people, including children, who live nearby.”

The proposed cuts might not halt the cleanups entirely but would substantially slow them down. Superfund sites tend to be located near lower-income neighborhoods and minority communities. According to the EPA, approximately 53 million people live within three miles of a Superfund site and 46 percent of them belong to a minority race—15 percent are below the poverty level.

It’s not just funds for cleanup that are in danger; so are the Superfund enforcement funds, the resources the EPA uses to hold companies and entities accountable. The proposal calls for a cut of nearly $29 million. According to a National Association of Clean Air Agencies report, “Without EPA’s enforcement, companies could avoid reporting, or minimize the reported amount of toxic materials released to the environment.” Under the Superfund law, in 2005 the EPA was able to hold General Electric accountable for dumping PCBs, a toxic chemical used in the manufacturing of electrical devices, into the Hudson River in New York for 30 years.

There are Superfund sites in every single state, the District of Columbia, and US territories, with more than 100 designated areas in New Jersey alone. This state is home to the most sites in anywhere in the country, and local officials are bracing for the impact of Trump cuts.

Consider Camden County, where from the mid-1800s until 1977, the company that would later become Sherwin-Williams dumped chemicals into Hilliards creek and constructed improper storage facilities that also leaked contaminants. The creek flows for more than a mile into Kirkwood Lake, which has also become contaminated; the soil in residential neighborhoods has been polluted too. What was once an idyllic backdrop for homes is now a shallow, dirty, mosquito haven. There have not been any reported health issues associated with the site, but there is a fish advisory because the lake is polluted with lead and arsenic.

The Superfund site was added to the National Priorities List in 2008, after contamination was found at the former site of the plant, but movement on the cleanup has moved at a glacial pace. “Thanks to an uprising in the community, the EPA and Sherwin-Williams began some of the residential cleanup,” Jeff Nash a Camden County elected representative, tells Mother Jones. For years, community members called on the EPA to begin the cleanup at the site. In 2014, the EPA, Sherwin-Williams, and Camden County held talks about taking steps to begin the process. But by April 2015, no concrete action had been taken, and property owners living near Kirkwood Lake protested the delays outside of a Sherwin-Williams paint store. Six months later, the EPA announced it had finalized a plan to begin removing contaminated soil near dozens of residential properties. There is no plan for cleaning the lake yet.

“It’s also a property tax nightmare—you can’t sell your house because it’s [on] a Superfund site,” Nash continued. The property values of known contaminated areas tend to fall drastically. “There has finally been some movement” on cleaning up the site in the last couple of years, he says, but there are fears that the Trump budget could upend all the progress. “From a county perspective, we’re very worried about it.”

Despite the Trump budget numbers, EPA chief Scott Pruitt has voiced his support of the Superfund program. Last month, he told the U.S. Conference of Mayors, “Superfund is an area that is absolutely essential.”