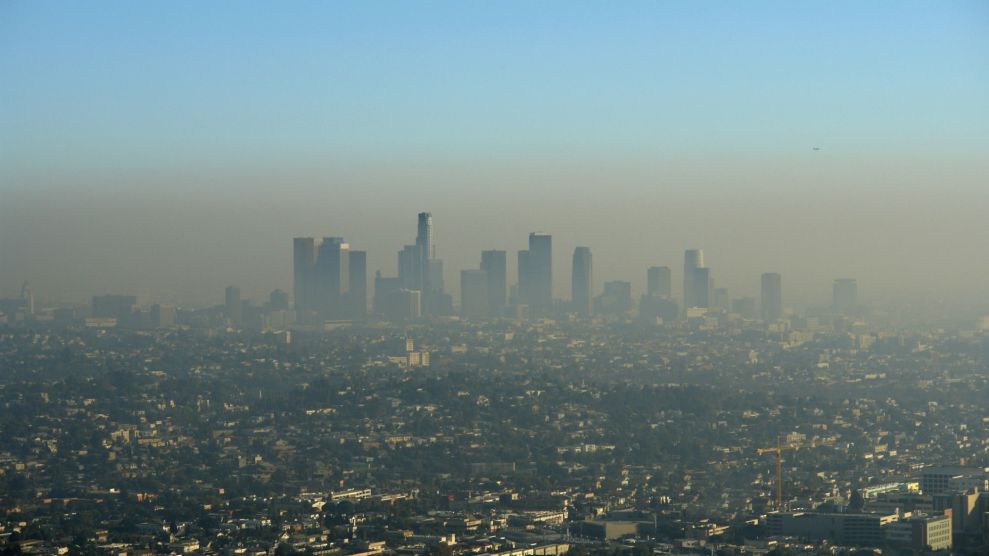 Los Angeles remains the city with the worst ozone pollution, according to the American Lung Association's "State of the Air 2017" report.steinphoto/Getty Images

In his America First Energy Plan, President Donald Trump boasts that “protecting clean air” will “remain a high priority” during his presidency. But just a few months into his term, Trump proposed cutting funding to the Environmental Protection Agency and signed an executive order to roll back the Clean Power Plan, an Obama-era regulation central to the enforcement of the Clean Air Act. Bad timing. According to a new report published today by the American Lung Association, nearly 4 in 10 Americans live in places where it is unhealthy for them to breathe.

The report also found an increase in dangerous short-term spikes in particle pollution.

The ALA’s “State of the Air 2017” report analyzed air pollution data collected by the EPA from 2013 to 2015 and found that 125 million people live in counties that have unhealthful levels of either ozone (smog) or particle pollution. Though this represents a “major improvement” from the 2016 report, which placed the number at 166 million, or more than half of all Americans, the ALA is concerned that the recent progress could reverse. “Implementing and enforcing the Clean Air Act is responsible for the progress that we’ve seen so far, and it’s the tool to continue progress,” says Paul Billings, ALA’s national senior vice president.

The installation of modern pollution controls on power plants and retirement of old plants, the increasing reliance on renewable energy sources and natural gas over coal, and the creation of more stringent fuel emission standards have all contributed to the pollution declines, he says. Trump’s proposed cuts “would not only eviscerate programs at the EPA and at regional offices, but also dramatically cut the grants that pass through EPA to state and local environmental agencies”—a big chunk of which is used for air pollution control work.

The report also found an increase in dangerous short-term spikes in particle pollution, or the tiny solid and liquid particles mixed into the air we breathe. Breathing in smog and particle pollution can cause serious health problems, increasing the risk of asthma and infections and cancers of the lungs, and also possibly contributing to heart disease, obesity, and more terrifyingly, degenerative brain diseases.

Many of the cities that reported the worst number of unhealthy days are concentrated in the Western states, including California, Oregon, and Nevada, and experienced wildfire smoke. Given the strong link between climate change and the increasing frequency and intensity of droughts and wildfires, the report concluded that the data “adds to the evidence that a changing climate is making it harder to protect human health.”

Air pollution control is “a multifaceted problem, and it requires a comprehensive solution with many different strategies,” says Billings. “So we need to make sure things like the Clean Power Plan are implemented. If you don’t have strict enforcement, companies cheat and the consequences are dire.”

Look up the air quality of your city and county here.