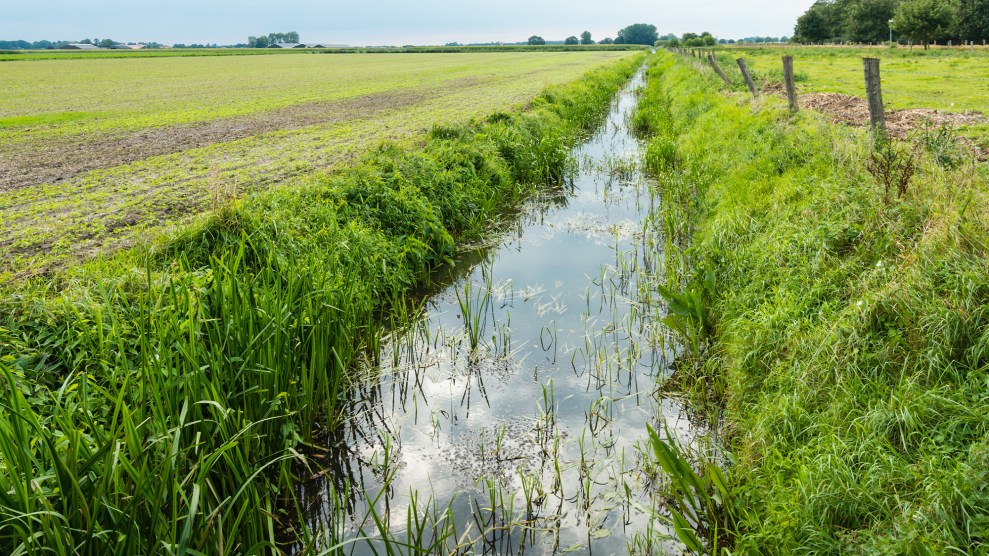 President Donald Trump rose to power amid solid support from the agricultural heartland—he gained endorsements from dozens of farm-state pols and agribiz execs and polled well among farmers. Since the inauguration, however, things have been rocky. Trump’s anti-immigrant and anti-refugee machinations amount to an attack on Big Ag’s labor pool, and his moves to kill trade pacts endanger much-needed export markets. But with the stroke of a pen on Tuesday, the new president delivered a gift that delighted his ag supporters.

“What’s so bizarre about the fight over WOTUS is that the only sector of commerce that’s clearly exempt from the rule has kicked up the most dirt about it.”

But did Trump serve a real policy triumph, or an empty gesture?

To answer that question, you’ll need a bit of background. What the president did was sign an executive order commanding the Environmental Protection Agency to reconsider the Waters of the United States Rule, a policy put into place by the Obama administration. WOTUS, as it is known, is a kind of addendum to the Clean Water Act of 1972, designed to define the kinds of waterways that are under EPA regulation. It was triggered by a split 2006 Supreme Court decision called Rapanos v. United States over whether a developer could fill in a wetland to build a shopping center.

WOTUS has emerged as a major bête noire in some ag circles. Agribiz lobbyist Larry Combest, a former US rep from Texas, declared it “one of the biggest land grabs in American history.” The American Farm Bureau Federation, which represents the interests of Big Ag, has vilified WOTUS since its inception, charging that it gives the EPA massive power to regulate farms.

At his signing ceremony, Trump gave voice to these complaints. Deeming WOTUS “one the worst examples of federal regulation,” Trump insisted that “it has truly run amok” and is “prohibiting [farmers] from being allowed to do what they’re supposed to be doing.” Echoing the Farm Bureau, he said WOTUS meant that the EPA can regulate “nearly every puddle and every ditch on a farmer’s land,” and vowed that his executive order would “pave the way for the elimination of this very destructive and horrible rule.”

Just one problem with that rhetoric: WOTUS has very little to do with farming. The original Clean Water Act exempted agriculture, and WOTUS maintains that status, notes Scott Faber, senior vice president of the Environmental Working Group. “What’s so bizarre about the fight over WOTUS is that the only sector of commerce that’s clearly exempt from the rule has kicked up the most dirt about it,” Faber said. Granted, defining what constitutes a waterway worthy of regulation is a complex process, and even WOTUS’s supplementary introduction is 299 pages. But concerns about ag are dispensed with on page 8:

This rule not only maintains current statutory exemptions, it expands regulatory exclusions from the definition of “waters of the United States” to make it clear that this rule does not add any additional permitting requirements on agriculture.

In a January 2017 report, the nonpartisan Congressional Research Service analyzed the WOTUS and came to the same conclusion as the EPA: The final rule “makes no change to and does not affect existing statutory and regulatory exclusions: exemptions for normal farming, ranching, and silviculture activities such as plowing, seeding, and cultivation.” The report notes that the Obama administration at one point proposed an interpretive rule that triggered confusion in the ag world about whether farm ditches might fall under regulation. But the EPA withdrew that particular proposal way back in January 2015, the CRS report states.

What’s more, says Faber, replacing WOTUS will be a long slog, requiring a lengthy rulemaking process. And once that process is done, he adds, the new rule will itself be subject to lawsuits from environmental groups that it’s deemed too weak.

So why did Big Ag fight so hard to kill WOTUS, and cheer so much when Trump moved against it? Faber declined to speculate.

I put the question to William Rodger, a spokesman for the Farm Bureau. He declined to talk but pointed me to brief the group filed in 2016 urging a federal court to overturn the rule. The document lists examples of farmers who, it insists, would run afoul of WOTUS.

One, in Oklahoma, had planned to clear a 50-acre plot next to his property for cattle grazing and farming. “But because the property contains a small creek bed—which is usually about 5-6 inches deep but ‘will often go dry’—the creek is likely to be deemed a ‘tributary’ under the Rule,” the doc states. As a result of the rule, the farmer “has therefore been forced to halt all plans for improving his property because the new regulation, if allowed to go into effect, will require him to obtain a costly jurisdictional determination from the [Army Corps of Engineers] and, depending on the outcome, a permit from EPA.” But an EPA fact sheet on WOTUS makes clear that such intermittent streams aren’t in fact regulated.

The Farm Bureau document also notes a farmer whose land has drainage ditches “that would also likely count as ‘tributaries’ under the Rule if it were allowed to come into effect.” But the EPA fact sheet states that “farmers, ranchers and foresters continue to receive exemptions from Clean Water Act Section…when they construct and maintain irrigation ditches and maintain drainage ditches.”

Even so, at an event after Trump signed the executive order, the Farm Bureau treated EPA Director Scott Pruitt to a “hero’s welcome” for his role in Trump’s WOTUS move, Bloomberg reports. In a statement, the group’s executive director, Zippy Duvall, insisted that the “flawed WOTUS rule has proven to be nothing more than a federal land grab, aimed at telling farmers and ranchers how to run their businesses,” and praised Trump for delivering a “welcome relief to farmers and ranchers across the country.”

Seems to me that by celebrating Trump’s attempt to dismantle a rule that so little affects agriculture, Big Ag is being a pretty cheap date—especially given what’s going on with trade and immigration.