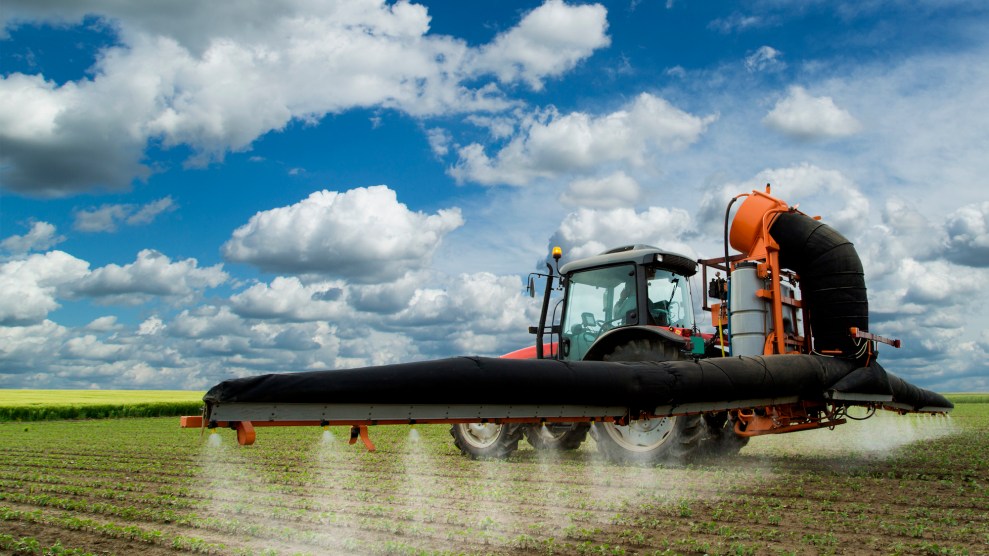 The Trump administration appears ready to bless a pair of megamergers that will dramatically reshape the markets for seeds and pesticides. First, before he even took office, the president met with the CEOs of German chemical giant Bayer and US seed titan Monsanto, and boasted of the flimsy jobs plan they promised if their proposed merger goes through. Trump has also had chummy relations with chemical giant Dow, in the middle of its pending merger with erstwhile rival DuPont. This week, Trump announced his choice to lead the Department of Justice’s antitrust division: a lawyer/lobbyist who, for nearly three decades, has been shuffling through the revolving door between large corporations and the government agencies that shape and execute merger policy.

“I’m willing to take my chances with The Donald,” Delrahim declared, citing the death of right-wing Supreme Court Justice Antonin Scalia and the need for a like-minded replacement.

Makan Delrahim now serves as deputy counsel to Trump, helping shepherd the Supreme Court nomination of Neil Gorsuch through the Senate. He moved to the White House from his perch as a partner at lobbying powerhouse Brownstein Hyatt Farber Schreck. There, his recent clients include pharma giant Pfizer, the tobacco and real estate conglomerate Vector group, and casino player Caesars Entertainment. As International Business Times‘ David Sirota reported last week, Delrahim also recently lobbied on behalf of heath insurer Anthem as the company beseeched the Justice Department to approve its now-stalled proposal to merge with erstwhile rival Cigna. (If he’s confirmed, Delrahim will lead the very office he lobbied on retainer for Anthem—though he’ll likely have to recuse himself from any decision involving Anthem.)

Before his stint as a lobbyist, Delrahim served as deputy assistant attorney general in the Antitrust Division under President George W. Bush in the early 2000s, and on Bush’s Antitrust Modernization Commission until 2007.

Delrahim is by all accounts a devoted conservative who jumped on the Trump train relatively early. In a March 2016 op-ed for the New York Post, he noted that Trump was not his first choice for president, but urged voters to “coalesce” around Trump as he began to dominate the Republican primaries. “I’m willing to take my chances with The Donald,” he declared, citing the death of right-wing Supreme Court Justice Antonin Scalia and the need for a like-minded replacement.

Like Scalia, Delrahim is widely viewed as friendly to mergers. In a memorandum to clients, the corporate law firm Davis Polk characterized him as “in line with previous Republican-appointed” DOJ antitrust enforcers, hewing to a “pragmatic, economically based approach to antitrust enforcement,” wary of “over-zealous enforcers and courts,” and attuned to the “need to promote and preserve efficiency-maximizing collaborations” among corporations. Such views mark a “significant shift from the view expressed” by President Barack Obama’s antitrust enforcers, who, the law firm noted, expressed skepticism about “proclaimed benefits and efficiencies” of mergers.

Over the next several months, the Trump DOJ will have to vet a slew of proposed corporate megamergers, including two that involve the agribusiness space: the planned marriage of two US chemical behemoths, and the German chemical giant Bayer’s takeover of US seed titan Monsanto.

Between them, Bayer-Monsanto and Dow-DuPont would sell 75 percent of the corn seeds planted by US farmers and 64 percent of soybean seeds.

As I noted here, these companies are all hotly marketing “precision agriculture” services, where they crunch data picked up from farmers’ field equipment and provide them with advice on what seed varieties to plant and pesticides to apply. Monsanto CEO Hugh Grant laid out the strategy in a conference call with investors a few months before the Bayer deal. Monsanto, he said, is pursuing an “integrated solution strategy” that creates a one-stop shop for “seeds, traits, chemistry, and data science tools to farmers around the world.” Dow, DuPont, and Syngenta have all rolled out their own, similarly closed-loop precision-ag arms. These arrangements give the tiny field of players even incentive to create, say, crop varieties that work only with one of their own proprietary pesticides.

One possibility is that the Department of Justice could approve the deals, on condition that the companies sell off overlapping business segments. The European Union recently signed off on the Dow-DuPont merger, after the companies agreed to what Bloomberg called “hefty concessions, including the sale of large parts of DuPont’s global pesticide business.” But such divestitures don’t automatically reduce consolidation. German chemical titan BASF, itself a large player in pesticides, has “expressed interest in snapping up some of the companies’ divested assets,” reports the Wall Street Journal. Meanwhile, if Bayer and Monsanto are forced to sell off some business lines to push their deal through, both BASF and Syngenta are ready to pounce on those juicy morsels, Bloomberg reports.

Also, such sell-offs don’t address the fact if the deals go through, what had been four R&D programs will be reduced to two, giving “short shrift to innovation competition,” says Diana Moss, president of the American Antitrust Institute. Moss argues that such hyperconsolidation limits farmers’ choices in the seed and chemical markets, driving up prices. Eventually, higher costs for these vital farm inputs will be passed on to consumers.