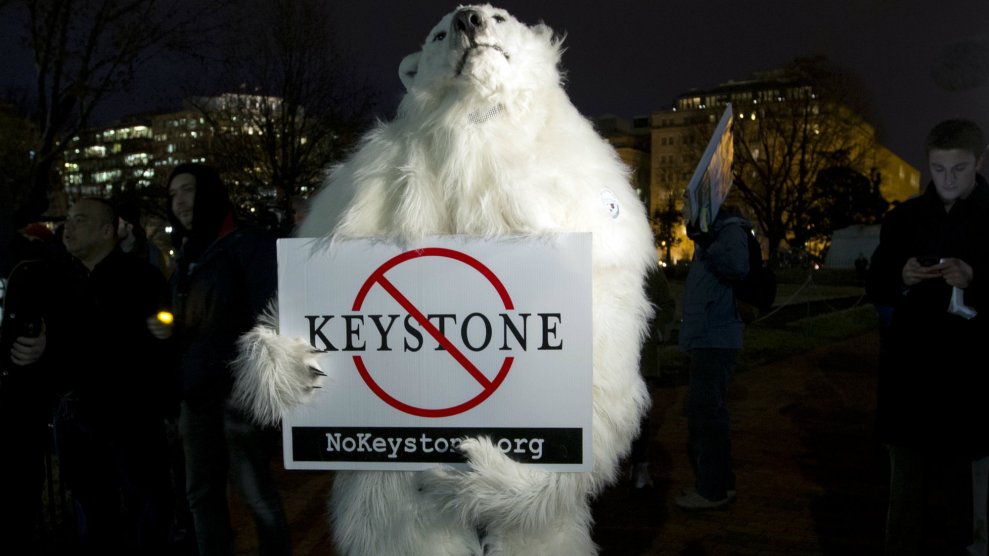 “It’s going to be an incredible pipeline. Greatest technology known to man. Or woman. And frankly, we’re very proud of it,” said Trump in the Oval Office on Friday morning.

The proposed Keystone XL pipeline will carry 800,000 barrels of tar sands oil from the fields in Alberta, Canada, to Steele City, Nebraska, where it meets another Keystone pipeline to send the oil to refineries on the gulf coast.

“This announcement is part of a new era of American energy policy that will lower costs for American families, and very significantly, reduce our dependence on foreign oil and create thousands of jobs right here in America and I would also like to add, I think it’s a lot safer to have pipelines than to use other forms of transportation for your product,” said the president during the Oval Office presentation.

Trump addressed Russ Girling, the president and CEO of TransCanada, joking about the years of delays the project has faced because of strong objections from local community and environmental grassroots protests against the pipeline.

“I hope you don’t pay your consultants anything because they had nothing to do with the approval. In fact, you should ask for your hundreds of millions of dollars back.”

“I hope you don’t pay your consultants anything because they had nothing to do with the approval. In fact, you should ask for your hundreds of millions of dollars back that you pay them because they didn’t do a damn thing except give you a no vote, right?” quipped Trump.

The president also seemed surprised by some details of the announcement, such as exclaiming “Wow!” when reading out a statement that the pipeline will be 900 miles long. Upon learning that TransCanada is awaiting approval from permits for construction in Nebraska, Trump chimed in that Republican governor Pete Ricketts is “a fantastic governor, I’ll call him today”.

“In making his determination that issuance of this permit would serve the national interest, the under secretary considered a range of factors, including but not limited to foreign policy; energy security; environmental, cultural and economic impacts; and compliance with applicable law and policy,” the department said, according to the Hill website.

The remarks contrasted sharply with Barack Obama’s comments in November 2015, when he rejected the Keystone XL deal after seven years of political debate and grassroots campaigning.

“America is now a global leader when it comes to taking serious action on climate change,” declared Obama then. “Frankly, approving that project would have undercut that global leadership, and that is the biggest risk we face: not acting.”

The pipeline is to run over the Ogallala aquifer, a huge underground reservoir in the Great Plains that provides water access to millions, including several Native American tribes.

Environmental activists reacted with horror at news of the permit’s issue today.

“When this fight began, the danger Keystone posed to the climate was clear. Since then we’ve had the three hottest years ever measured on our planet. That clearly means little to Donald Trump, but it means a lot to the millions of us who will continue to gather in resistance to an overheated future,” said Bill McKibben, co-founder of environmental advocacy group 350.org.

Author and activist Naomi Klein, a longtime Keystone opponent, called it “a disaster for the planet” in a statement:

“This is no surprise coming from a State Department headed by a man who was CEO of Exxon until a couple of months ago, and from a White House for whom digging up planet-destabilizing carbon is the centerpiece of its jobs plan, despite the fact that renewables and energy efficiency have the capacity to create exponentially more jobs.”

Klein went on to note the hypocritical actions of liberal Canadian politicians involved in approving the project: “A greater scandal is that Keystone’s approval has been cheered on by the Liberal prime minister of Canada and the social democratic premier of Alberta, both of whom position themselves as bold climate leaders. And both of whom have collaborated to win the approval of two other tar sands pipeline projects in the past few months: Enbridge’s Line 3 and Kinder Morgan’s Trans Mountain expansion.”

Although the State Department noted the economic impact in its decision, the project will result in only 35 permanent jobs after initial construction.

The permit was signed by Tom Shannon, a career diplomat serving as undersecretary of state for political affairs. That is because secretary of state Rex Tillerson recused himself due to his previous work running Exxon Mobil.

Just four weeks after Obama’s halted the Keystone XL pipeline, the US joined nearly 200 nations in pledging to cut carbon emissions in the the historical Paris climate deal.

Throughout the election campaign Trump promised to withdraw the US from the Paris accord, although in late November he said he had an “open mind” about the plan.