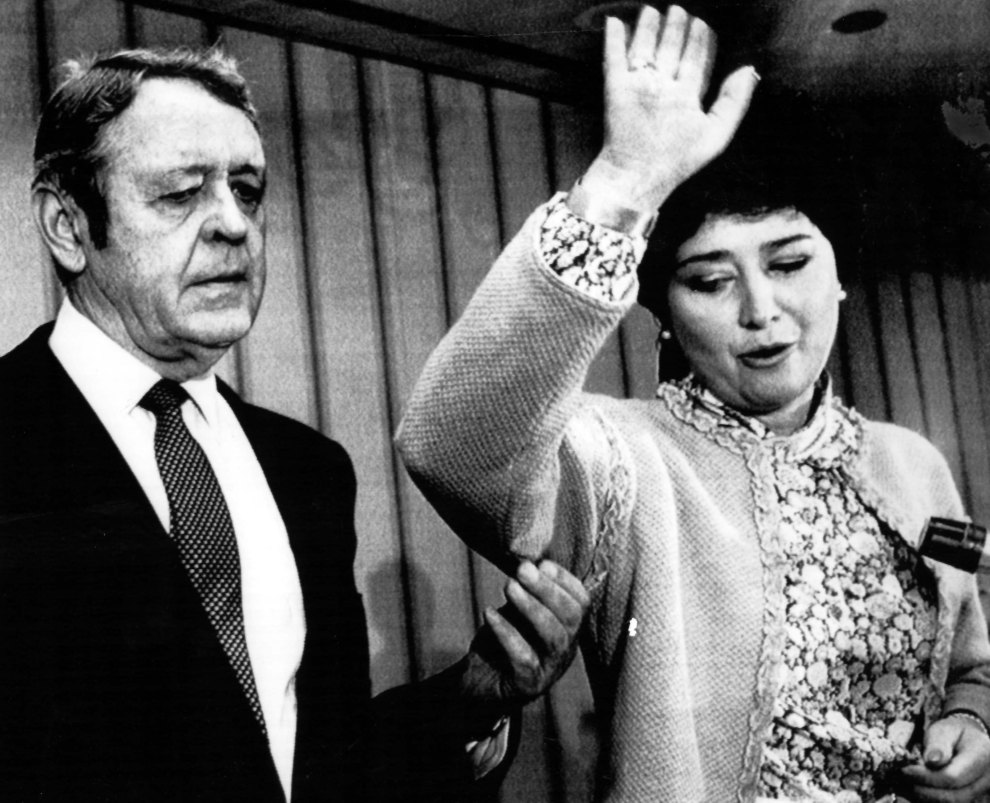 Former Enviromental Protection Agency Administrator Anne Burford is assisted by her husband Robert after a farewell news conference in Washington, March 10, 1983. She resigned under pressure from the agency. Ira Schwarz/Ap Photo

March 25, 1983, business was booming at Harry’s Liquor, Wine & Cheese, near the Environmental Protection Agency’s Washington, D.C., headquarters. EPA employees were in the mood to party. The agency’s top lawyer had just resigned, the latest casualty in a purge of political appointees. Weeks earlier, EPA Administrator Anne Gorsuch Burford had also resigned amid a ballooning controversy over her management of the Superfund program. Agency staff celebrated by springing for eight cases of champagne and six ounces of Russian caviar from Harry’s. One employee even took vacation time to sell commemorative T-shirts to his colleagues. They read: “I Survived the Ice Queen’s Acid Reign.”

The EPA was only a decade old when Gorsuch, as she was then known—she married Bureau of Land Management Director Robert Burford in 1983—became its first female administrator. Gorsuch, a conservative state legislator from Colorado, promptly embroiled the agency in a political fight for its life. Even though Congress had recently expanded the EPA’s workload, Gorsuch and the Reagan White House cut its budget and staff. Gorsuch derided the agency’s approach to environmental protection as “bean counting,” saying it measured success by the number of enforcement actions it took or regulations it issued rather than by what they achieved. She claimed that the agency could do more for the environment with fewer resources by giving states broader autonomy to decide how to curb pollution. But many career employees, environmentalists and congressional representatives didn’t buy it, seeing Gorsuch’s philosophy as window dressing for an industry-friendly agenda to neuter environmental laws.

“For someone like myself, it’s like, ‘Oh my God, do we really have to do this again?’ “

The debate surrounding the EPA’s future is strikingly similar today as Scott Pruitt assumes command. The former Oklahoma attorney general made a name for himself by fighting what he termed the “activist agenda” of former President Barack Obama’s EPA. Pruitt filed 14 lawsuits against the agency, including suits to block its efforts to clear smog from national parks and wilderness areas and to cut carbon emissions from power plants. Like Gorsuch, Pruitt thinks the EPA needs to relinquish more power to the states.

Some pro-environment Republicans agree, and hope Pruitt can empower the states to come up with innovative solutions to environmental problems. But many in the environmental community regard Pruitt’s arrival at the EPA as a hostile takeover, and fear that the Trump administration’s real goal is to dismantle the agency. Donald Trump said as much during the campaign, and in early March, the White House reportedly drafted a proposal to cut the EPA’s staff by 20 percent and its budget by 25 percent.

“For someone like myself, it’s like, ‘Oh my God, do we really have to do this again?’ ” says Pat Parenteau, a Vermont Law School professor who was an environmental advocate in D.C. in the early 1980s. Trump’s budget proposal mirrors the approach Gorsuch and the White House took during President Ronald Reagan’s first years in office. Ultimately, they failed to dramatically transform the EPA, and federal environmental laws have mostly survived subsequent attacks. But the political winds have shifted since Reagan’s time, in Congress as well as within the Republican Party. As Pruitt told the Conservative Political Action Conference last month, “The future ain’t what it used to be.”

This is how the New York Times described the EPA shortly before Gorsuch resigned: “Once noted for its efficiency and esprit, the agency is now demoralized and virtually inert.”

Gorsuch and Reagan cut the agency’s budget by about a quarter and its workforce by nearly 20 percent. Gorsuch also adopted a relaxed attitude toward enforcement: When a New Mexico oil refinery complained in a private meeting that it couldn’t afford to comply with regulations requiring it to produce gasoline with lower lead levels, Gorsuch told the company it wouldn’t be penalized for flouting the rules. The White House declined to discipline Gorsuch, but the incident contributed to the perception that Gorsuch was too cozy with polluters.

The issue came to a head over the Superfund program. Gorsuch took charge shortly after Superfund was created to clean up dangerously polluted places such as Love Canal, New York, a community built on top of a toxic waste dump whose residents suffered unusual illnesses and high rates of birth defects and miscarriages. The agency was supposed to develop a priority list of polluted sites and either force companies to clean them up or use money from the fund to do so itself.

Environmentalists and congressional Democrats believed that the cleanup progress was inexcusably slow, with penalties on polluters too light. At a defunct chemical waste processing facility in Indiana, for instance, Gorsuch’s EPA allowed a company to pay only a third of the cost of cleaning up aboveground pollution, and then granted it immunity from liability for belowground waste. A couple years in, the agency still hadn’t set up a registry to track health problems associated with hazardous waste pollution, as required by law.

Accusations of mismanagement led to multiple congressional investigations, and the FBI also investigated the agency for shredding documents related to the Superfund probes. Rita Lavelle, the Gorsuch deputy who headed Superfund, came under fire for accepting expensive dinners from industry and striking sweetheart deals with those companies. She later served time in jail for lying to Congress about a conflict of interest involving a former employer. Gorsuch herself was cited by Congress for contempt after refusing to turn over documents during the investigations. By Gorsuch’s own admission, the resulting political meltdown paralyzed the agency, preventing it from getting any actual work done. Gorsuch resigned in 1983 after learning the Justice Department wouldn’t defend her on the contempt charge. It was just two years into Reagan’s presidency.

“The Reagan people came into office with the same kind of fervor for rolling back environmental regulations that we’re seeing now.”

“The Reagan people came into office with the same kind of fervor for rolling back environmental regulations that we’re seeing now,” says Richard Ayres, an environmental lawyer who headed the Natural Resources Defense Council’s air quality programs at the time. But their success was limited, partly due to the Superfund controversy, which emerged quickly and inhibited the administration’s ability to aggressively pursue its deregulation agenda. Their efforts also ran up against a moderate Republican Senate and a House controlled by Democrats, which worked doggedly to expose industry favoritism at EPA and keep accusations about mismanagement in the public eye. After Gorsuch left, the White House decided the rewards of waging war on environmental laws weren’t worth the political price.

“Reagan was anti-regulation,” Parenteau says, “but he didn’t have a deep hostility or resentment about environmental laws.” Reagan replaced Gorsuch with William Ruckelshaus, a moderate known for his integrity. Ruckelshaus, who was respected on both sides of the aisle, helped restore the agency’s credibility.

The Republican presidents since Reagan—George H.W. Bush and George W. Bush—mostly chose EPA administrators who were experienced environmental professionals, consistent with the Ruckelshaus model. Pruitt, on the other hand, appears to have been selected for his deep distrust of the agency.

In today’s Republican Party, he’s not an outlier. “It’s probably best to see the Pruitt EPA not as a special Donald Trump twist on the EPA, but as the latest evolution in a larger conservative attack on the agency,” says Paul Sabin, a Yale University environmental historian. Gorsuch and her ideological brother James Watt, who was Reagan’s Interior secretary until 1983, were part of the vanguard of the conservative resistance to the landmark environmental laws passed in the 1970s, which vastly expanded the federal government’s role in protecting air, water and biodiversity. Since then, the tactics for undermining these protections have grown more sophisticated and been widely embraced by the Republican Party, Sabin says. Today, a formidable network of think tanks and right-wing media pushes deregulation at the state and federal level, and critics attack the science that underlies environmental regulation. “A major shift in the party was with the ’94 election and the Gingrich revolution,” Sabin says. “That’s when the party gets more purified in its hostility toward environmental regulation.”

That hostility has reached an apex in the current Congress, which is unlikely to be the check on EPA inaction that it was with Gorsuch, leaving the job primarily to environmental attorneys and the courts. Some House Republicans are intent on pursuing their own deregulatory agenda, with a recently introduced bill to abolish the EPA altogether, as well as talk of repealing and replacing the Endangered Species Act and a recent vote to block EPA rules to protect streams from pollution from coal mines.

Pruitt, for his part, declined to name a single EPA regulation he supports during his confirmation hearing. He also refused to promise to continue to allow California to enact its own strict clean-car standards, despite his stated commitment to states’ rights. The priorities he’s highlighted since include rolling back Obama-era clean water rules and carbon regulations, though he has also promised to promote Superfund cleanups, water infrastructure improvements and compliance with existing air-quality standards.

“The idea that he will just slash and burn the agency, I think, is mistaken,” says Brent Fewell, a D.C. water lawyer and philosophical conservative who served in the number-two spot in the EPA’s Office of Water under George W. Bush. “It’s not that he hates the EPA. He hates overreach.” There are gray areas in the Clean Air and Water acts that the EPA has tried to fill in over time, and Fewell thinks Pruitt has a legitimate point that it’s sometimes gone too far.

Environmentalists tend to hear calls for state rights as code for fewer constraints on industry and more pollution. But Fewell says those outcomes aren’t inevitable. He’s optimistic about states assuming an expanded role in environmental protection. States already shoulder a lot of responsibility for implementing federal environmental regulations, but Fewell says the EPA tends to micromanage them, not giving them much freedom to devise their own methods of meeting clean air or water standards. That breeds resentment: “There’s a lot of fighting. I believe if the states are incentivized to be more creative, we could see more environmental protection.”

Of course, it’s possible that while, in theory, a more restrained EPA could inspire states to become more proactive, in practice some states will step up and others will step back. Gorsuch’s tenure didn’t last long enough to let that experiment play out. If Pruitt’s does, we may soon learn how closely theory and practice align.