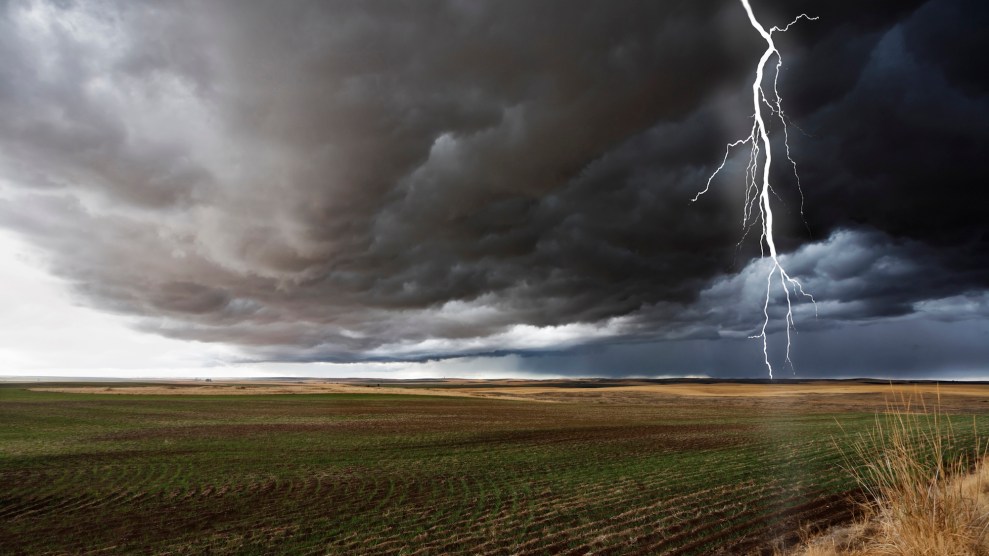 With great fanfare last week, President Donald Trump signed an executive order withdrawing an Environmental Protection Agency clean-water rule, which he packaged as a gift to farmers, one that would free them from onerous federal regulation. As I showed in a piece, Trump’s gesture did no such thing—farmers were already exempt from the EPA’s water regulations. Meanwhile, the president is quietly mulling steep budget cuts to programs that actually do affect farmers: ones that they (and everyone else) rely on for weather forecasts.

Trump’s leaked proposal calls for a $513 million cut to the satellite program, about 22 percent of its annual budget.

The Washington Post got hold of documents from Trump’s Office of Management and Budget revealing a plan to cut the budget for National Oceanic and Atmospheric Administration by 17 percent. NOAA’s National Weather Service would escape relatively unscathed, with its budget trimmed just 5 percent, the Post reports.

But to provide its forecasts, the Weather Service leans heavily on another NOAA program, the National Environmental Satellite, Data and Information Service, which operates the satellite that deliver crucial data. And that’s exactly the place within NOAA where Trump’s budget ax would fall the hardest, The Post found: His leaked proposal calls for a $513 million cut to the satellite program, about 22 percent of its annual budget.

“Data from weather satellites are indispensable for models used to predict the weather,” the Post reports. “NOAA has conducted experiments that show that forecasts for costly and deadly storms would be far less accurate without such information.”

In my time farming vegetables in western North Carolina, my co-workers and I relied heavily on weather forecasts to make decisions on when to sow seeds (best before a rain) or cover frost-vulnerable crops to protect them from an unseasonable cold snap.

On the other end of the scale, big agribusiness also makes profitable use of government weather data. The emerging market for “precision agriculture” services, which I wrote about here, is based largely on crunching NOAA satellite data to offer farmers “hyper-local weather monitoring,” as the industry’s biggest player, Monsanto’s Climate Corp., puts it. Former Mother Jones reporter Tim McDonnell noted back in 2014 that “with Monsanto now at the helm, a team of a dozen Climate Corp. researchers are working full time to pull climate data from government satellites and weather stations, university research sensors, and any other source they can find. This gets fed through a pipeline of data analysts and software engineers and emerges at the other end as Climate Basic.” Climate Corp.’s spokeswoman did not return my request for comment on the proposed cuts to NOAA’s satellite program.

I asked a spokesman for the US Farm Bureau Federation, a Big Ag lobbying outfit that made a huge fuss over the EPA water rule that Trump recently rescinded, what the group thought of the proposed cuts to NOAA’s satellite program. “It’s not been on our radar,” Will Rodger, the ABFB’s director of policy communications, quipped. That’s a surprising position, for a group that calls itself the “voice of agriculture.”

Tom Driscoll, director of conservation policy for the National Farmers Union, was more to the point. “There are few important decisions farmers can make without contemplating weather in both the long and short term,” he said. Fruit and vegetable growers need accurate forecasts to “schedule labor safely and effectively,” he said, while big corn and soybean farmers need it so the fertilizers and pesticides they they apply “aren’t immediately washed away in a rainstorm” and livestock farmers need them to protect animals from extreme events like floods.

Trump’s recent executive order protected farmers from an EPA crackdown that’s purely imaginary. But if his cuts to NOAA’s satellite budget come to pass, he may just release some all-too-real weather furies onto farm country—especially as climate change continues to make extreme events like storms more common and severe.