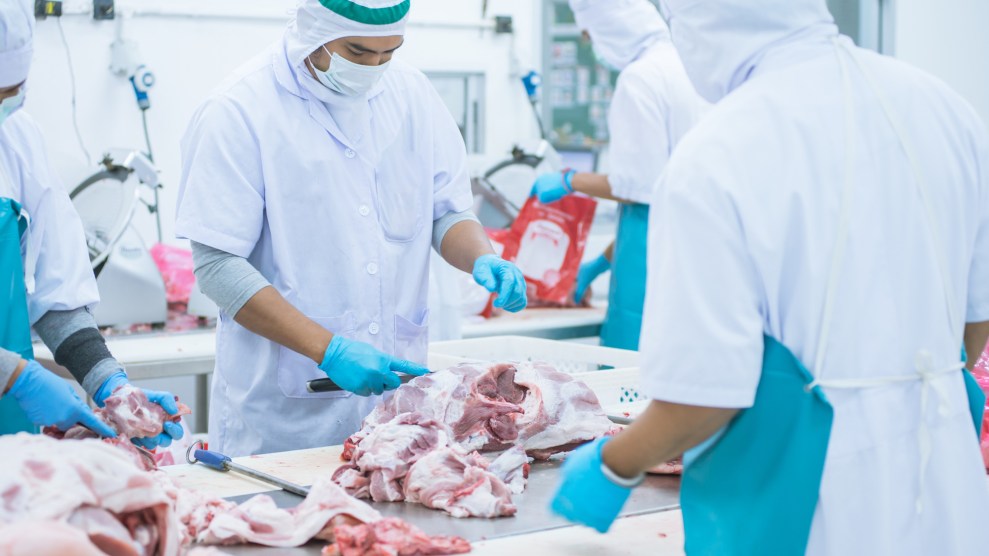 Of all the outrage generated by President Donald Trump’s ban on refugees entering the country, the most surprising critic might be the US meat industry.

Refugees are a group just as desperate for work as undocumented migrants, but legally eligible to hold jobs.

Turns out, people fleeing desperate conditions in violence-ravaged countries have emerged as a key labor source for the nation’s vast and dangerous slaughterhouses. Because meat-packing is such a high-turnover occupation, precise numbers on the makeup of its labor pool are hard to come by. The Journal reports that about a third of meat-packing workers are foreign-born, and that industry has increasingly turned to refugee populations to fill jobs.

The head of the industry’s main trade association, the North American Meat Institute, put it delicately in a statement to The Wall Street Journal: “As the administration pursues changes to the nation’s refugee policies, we hope it will give careful consideration to the ramifications policy changes like these can have on our businesses and on foreign born workers who are eager to build new lives in America through the jobs our companies can offer.”

But it’s unlikely that the handful of companies that dominate US meat production hires refugees based mainly on altruistic motives. As Eric Schlosser noted in an excellent 2001 Mother Jones article, way back in the early 1960s, US meatpacking companies began to flee cities, where workers were largely unionized, for rural areas. Once they set up shop far from union strongholds, they began “recruiting immigrant workers from Mexico, introducing a new division of labor that eliminated the need for skilled butchers, and ruthlessly battling unions,” Schlosser writes. Before, “meatpacking jobs were dangerous and unpleasant, but provided enough income for a solid, middle-class life;” by the 1990s, with the unions busted, meatpacking became “one of the nation’s lowest-paid industrial jobs, with one of the highest turnover rates.”

Also, as Ted Genoways showed in his searing 2011 Mother Jones expose of conditions at a Hormel plant in small-town Minnesota, the jobs remained incredibly dangerous, and became highly reliant on immigrant labor, mainly from Mexico and points south.

In more recent years, migration from Mexico has slowed dramatically. Meanwhile, the federal government launched high-profile raids at meatpacking plants to root out undocumented migrants, making the industry skittish about its reliance on them. Enter refugees, a group just as desperate for work as undocumented migrants, but legally eligible to hold jobs.

In an excellent 2016 feature, Washington Post writer Chico Harlan documented the meat industry’s increasing reliance on refugees. Since the meatpacking raids of the 2000s, Harlan writes, “‘Little Somalia’ neighborhoods are sprouting up in dozens of towns across the Great Plains, and slaughterhouses are hiring Somali translators for the cutting floors and installing Muslim prayer rooms for employees.”

People fleeing the chaos of Somalia, of course, are two-time losers under Trump’s executive order. Not only are all refugees now being denied entry, but Somalia is also one of the seven Muslim-majority nations whose citizens are barred from entering the United States, refugee status or not.

Harlan’s piece traces the experience of a young Somali man named Ahmed, who found gainful employment in Liberal, Kansas, at a beef slaughterhouse run by National Beef, one of the nation’s big-four beefpackers:

For Ahmed, the job at National Beef meant butchering parts of 3,000 cows per eight-hour shift, a supervisor standing right behind him, using the knife so furiously he would sometimes feel like his ribs were shaking loose. But the job was also a test of the limits in America for a largely destitute, unskilled and growing influx of Somali refugees, a group that was now prevailing in the competition for grueling jobs because of the very desperation they were trying to escape.

And he’s not alone. According to a 2015 report from the US Government Accountability Office, while injury and illness rates for meat-packing workers have declined in recent years, “hazardous conditions remain,” including repetitive motions that trigger musculoskeletal trouble like carpal tunnel syndrome, “exposure to chemicals and pathogens, and traumatic injuries from machines and tools.”

Worse still, the GAO found, many injuries may be significantly under-reported, for a variety of reasons: Much of the labor force works for third-party contractors and their injuries aren’t necessarily counted in meat-packing data; companies have an incentive to discourage trips to the doctor for workers suffering pain, instead offering “over- the-counter painkillers and ointments”; and finally, “vulnerable workers such as immigrants and noncitizens may fear for their livelihoods and feel pressured not to report injuries.”

Refugee workers fit that bill. Trump’s efforts to demonize them will only make life harder for some of the world’s most vulnerable people.

For the meat industry—which supported Trump over Hillary Clinton in the presidential election, in terms of campaign donations—Trump’s crackdown marks the second disappointment in a week. The industry also cried foul over Trump’s recent moves against high-profile trade deals. Just as meat companies rely on foreign workers to do their dirty work, they rely on foreign markets to maintain profit growth.