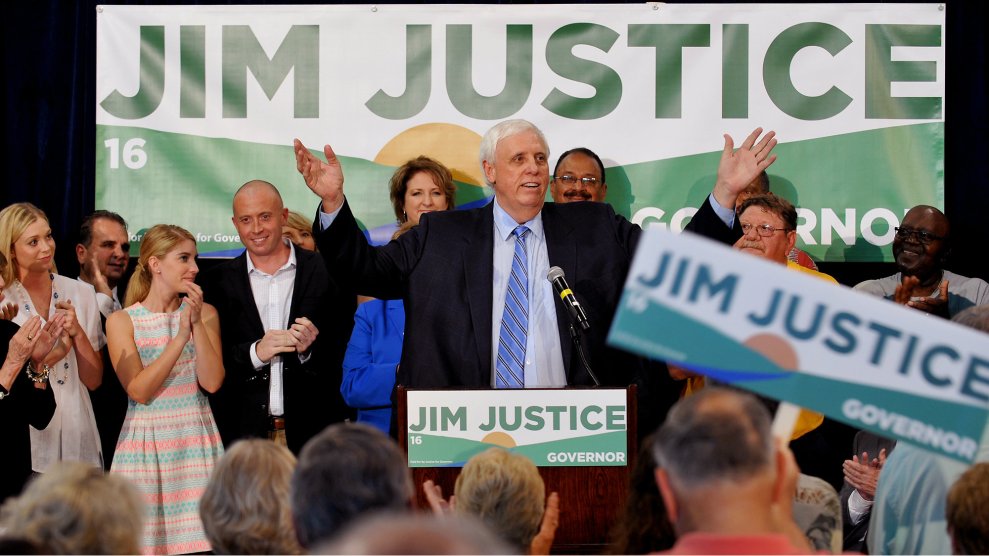 After a five-year investigation, the Environmental Protection Agency on Friday announced a nearly $6 million settlement with Southern Coal Corporation and 26 affiliated companies over pollution allegations.

The settlement isn’t a particularly expensive one by industry standards, but it could have an outsize political impact. That’s because Southern Coal is owned by Jim Justice, a billionaire Democrat who is currently running for governor of West Virginia. In addition to the alleged violations cited in the complaint, Justice’s companies have previously been accused of missing tax payments and racking up unpaid fines imposed for safety violations at their mines, according to local officials and records cited by the Washington Post. (A campaign spokesman told the Post at the time that Justice “has always, and will always, meet every obligation.”)

Read More: The Epic Rise and Fall of America’s Most Notorious Coal Baron

Unlike many of its competitors, Southern Coal has managed to avoid bankruptcy in an industry rocked in recent years by stricter environmental regulations and increasing competition from cheap natural gas. But the company wasn’t able to escape scrutiny from EPA officials. The agency charged that Southern Coal and its affiliates’ mining and processing operations violated the Clean Water Act by polluting in excess of legal limits, failing to test nearby water, and failing to monitor and submit reports documenting pollutant levels in the water. The companies did not admit to any wrongdoing in the settlement.

“These settlements are one important piece of a very large puzzle.”

The agreement with the EPA and the Justice Department requires Southern Coal and the affiliated companies to upgrade their management systems to better track and reduce the discharge of pollutants such as iron and manganese, a metal that is safe in small doses but toxic at high levels. The estimated cost of the fixes is $5 million.

The companies must also create a website where the public can view data on water quality near mine operations. Furthermore, they must submit to audits and pay a $900,000 penalty divided between the federal government and four states involved in the case: Alabama, Tennessee, Virginia, and Kentucky.

To put the settlement in perspective, in 2014 coal company Alpha Natural Resources reached an agreement with the EPA over similar Clean Water Act violations. The price of that settlement? More than $200 million in system upgrade costs and civil penalties.

In an email statement to Mother Jones, Southern Coal promised to strengthen efforts to comply with environmental regulations.

“After two years of working closely with the EPA we are pleased that an agreement has been reached, and Southern Coal will continue working with state and federal regulators to maintain our current 99.8 percent compliance rate and implement additional best practices in environmental management to reach 100 percent compliance,” said company spokesman Tom Lusk.

The company also states that “many of the violations in this agreement were from permits inherited from coal companies not previously owned by Southern Coal.”

Community activist Gabby Gillespie, an organizer in Virginia and a representative for the Sierra Club, welcomed the EPA settlement but argued that companies like Southern Coal still need to do much more. “This is just kind of a band-aid on a way bigger issue,” she said.

She acknowledged that “these settlements are one important piece of a very large puzzle.” But, she added, coal country needs more funding for water cleanup so that local communities are not left with the bill.

The Justice campaign did not respond to repeated requests for comment on the settlement.

In recent months, Justice has walked a fine line between defending the use of coal power and proclaiming the importance of clean water. Five months ago, he told the editorial board of the Register-Herald, a local West Virginia newspaper, “We should do every prudent thing we could possibly do to ensure we have clean and plentiful water. We are the second most forested state in the country. I think we need to do any and everything we possibly can, within the realm of prudent good judgment to protect our waters and to protect their cleanliness and their abundance.”

But Justice’s campaign website promises that as governor, he would “promote new uses for coal” and “incentivize our power plants to use only West Virginia coal.” The site also includes a petition where visitors can sign a pledge to “support the growth and expansion of West Virginia’s coal industry” and “fully support the safety of all West Virginia coal miners.”

Justice has also questioned the reliability of climate science. He told the Register-Herald, “Until we have really accurate data to prove (that humans contribute) I don’t think we need to blow our legs off on a concept. I welcome the scientific approach to it and the knowledge. I would not sit here and say, ‘absolutely now, there’s no such thing’ or I would no way on Earth say there is such a thing. I believe there’s an awful lot of scientist that say, ‘no, no, no, this is just smoke and mirrors.’ I welcome the discussion, but I don’t know, I just don’t know.”