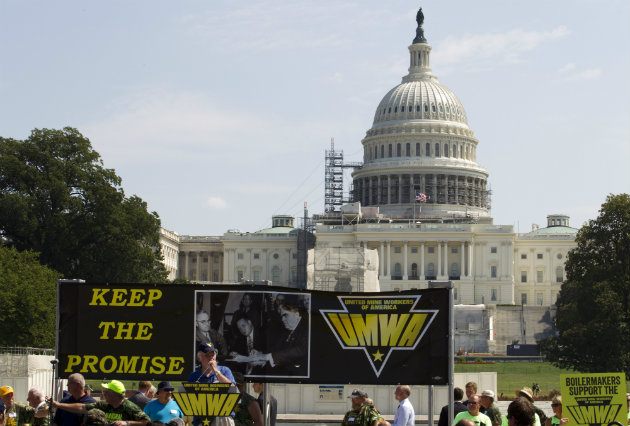 Members of the United Mine Workers of America and their supporters rallied in Washington to preserve health care and pension benefits on September 8, 2016. Jose Luis Magana/AP

Tens of thousands of retired coal miners could lose their health coverage and pensions over the next year if a bill to ensure federal funding for the benefits doesn’t pass Congress.

The crisis has erupted into an impassioned political debate, pitting Republican opponents of the legislation against a bipartisan coalition of coal-state lawmakers. It’s even emerged as an issue in the presidential race, with Hillary Clinton expressing support for the bill and Tim Kaine (D-Va.), her running mate, co-sponsoring it in the Senate.

The dispute has its roots in 1946, when, in response to a massive coal strike, the Truman administration nationalized the mines. In order to end the strike, then-United Mine Workers of America union president John Lewis and Interior Secretary Julius Krug worked out a deal in which coal companies would pay royalties into a pension fund for retired miners and would also contribute money (deducted from miners’ paychecks) into a health insurance fund. These pension and health care programs went through various iterations in subsequent years.

But in recent years, a confluence of economic and policy factors has decimated the coal industry and now threatens to wipe out the miners’ hard-won retirement benefits. Tougher environmental regulations, mechanization in the mines, and increasing competition from clean energy and cheap natural gas have made a huge dent in the industry’s bottom line. Some companies have closed, and industry leaders such as Alpha Natural Resources and Peabody have filed for bankruptcy. As coal firms slashed their workforces, the amount of money being paid out in retirement benefits surpassed the amount coming in, explains union spokesman Phil Smith. The 2008 financial crisis also hit the pension plan hard, he says.

What’s more, the bankrupt companies have been relieved by the courts of their obligation to pay for retiree benefits. The UMWA was able to negotiate temporary payments from those companies into new health care funds set up by the union. But with that money beginning to run out and one of the funds teetering on the edge of insolvency, the Krug-Lewis agreement has become a rallying cry for advocates who are urging Congress to step in and “keep the promise” made to miners.

“We believe that when you make a promise, you don’t forsake the miners, the widows, or their families,” said Sen. Shelley Moore Capito. “A promise made is a promise kept.”

Thousands of UMWA members and their supporters converged on Washington in September for a charged rally in support of legislation that would use federal dollars to bail out the struggling retirement and health care funds. Retired miners spoke of how they could be affected if the bill doesn’t pass. Joe Stowers, 72, a union member from Du Quoin, Illinois, said he might have to come out of retirement and find a job. “I thought my tomorrow was safe,” he said. “Apparently it’s an entirely different story.”

Senators including Joe Manchin (D-W.Va.), Shelley Moore Capito (R-W.Va.), Mark Warner (D-Va.), and Rob Portman (R-Ohio), addressed the crowd. “We believe that when you make a promise, you don’t forsake the miners, the widows, or their families,” said Capito. “A promise made is a promise kept.”

Manchin, who is sponsoring the bill in the Senate, reassured the workers that the legislation would move forward. “We are not gonna let you down,” he said.

But Sherrod Brown (D-Ohio), also a supporter of the bill, warned that its passage may not be so simple. There is “one guy,” he said, “who doesn’t much like the UMWA.” That man, Brown said, is Mitch McConnell, the Republican Senate majority leader, whom Brown blames for holding up the bill.

Two weeks after the rally, a bipartisan majority of Senate Finance Committee members voted 18 to 8 to move the bill out of committee and onto the floor of the Senate. (All the senators who voted “no” are Republicans.) But the bill’s future will remain unknown until McConnell agrees to allow a floor vote—something he has yet to do. At a press conference in September, McConnell suggested the bill could get a vote during the weeks after the election, according to USA Today. A similar bill in the House of Representatives is waiting in committee.

“The US government has never and does not have any obligation to provide retirement benefits to United Mine Worker miners,” said Sen. Mike Enzi.

McConnell’s office didn’t respond to requests for comment, but he has reportedly expressed skepticism about the legislation. Other Republican lawmakers, along with an influential conservative think tank, have come out against the bill. The Heritage Foundation argues that the Krug-Lewis agreement was never intended to be a permanent promise that the federal government would ensure the security of union members’ retirement benefits once the government relinquished control of the mines. Others warn that passage of the bill would set a troubling precedent under which the government would be expected to bail out other private-sector pension plans. Sen. Mike Enzi (R-Wyo.), an opponent of the bill who hails from a coal state with mostly nonunion workers, said at the Senate Finance Committee hearing that he had commissioned a legal memo from the nonpartisan Congressional Research Service showing that “the US government has never and does not have any obligation to provide retirement benefits to United Mine Worker miners.”

Opponents of the bill also complain that it only covers union workers, leaving nonunion miners without similar benefits. “The bill helps only some of the thousands of coal miners that are hurting because of the administration’s war on fossil fuels,” said Enzi. “They’d rather have their jobs back.”

Smith, the UMWA spokesman, counters that the union isn’t “necessarily opposed” to benefits for nonunion miners but that it shouldn’t preclude passage of this bill. “It’s odd to us for folks to say since we can’t help everybody, we’re not gonna help anybody,” he said.

In the meantime, the situation has become increasingly dire. While Congress recesses until after the election, some miners are already receiving notice that their health benefits will be terminated by the end of the year. On October 5, a letter sent to 12,500 union members informed them that because of a funding shortfall, retirees from Peabody Energy, Arch Coal, and Patriot Coal receiving benefits through one of the temporary UMWA funds will lose coverage on December 31 unless Congress acts. Retirees from Walter Energy and Alpha Natural Resources, two other coal companies that filed for bankruptcy, will see their benefits expire in March and July of 2017, said Smith.

The controversy has also surfaced in the presidential race. In a statement released in September, Clinton called on congressional Republicans to “stop playing politics” and give the bill a vote, arguing that the miners “are entitled to the benefits they have earned and the respect they deserve.”

Clinton’s position on the issue is part of her complicated effort to win support from voters in coal country, many of whom are deeply suspicious of her embrace of what they see as President Barack Obama’s “war on coal.” She’s taken heat for comments at a CNN Town Hall in March in which she said coal industry jobs would continue to disappear. “We’re going to put a lot of coal miners and coal companies out of business,” she said.

Clinton followed that statement with a pledge not to leave unemployed workers behind, but the gaffe became a talking point for her critics, including Donald Trump, who has promised to bring back coal jobs.

Trump has so far been silent on the retirement legislation. His campaign did not respond to requests for comment.

For the union members, the stakes are high. Bobby Parks, of Welch, West Virginia, said she suffered an injury in a mine in 1992 that caused her bones to start deteriorating. Now, she prays that the bill to preserve her health care benefits will pass. “That’s the only hope we got,” she said.