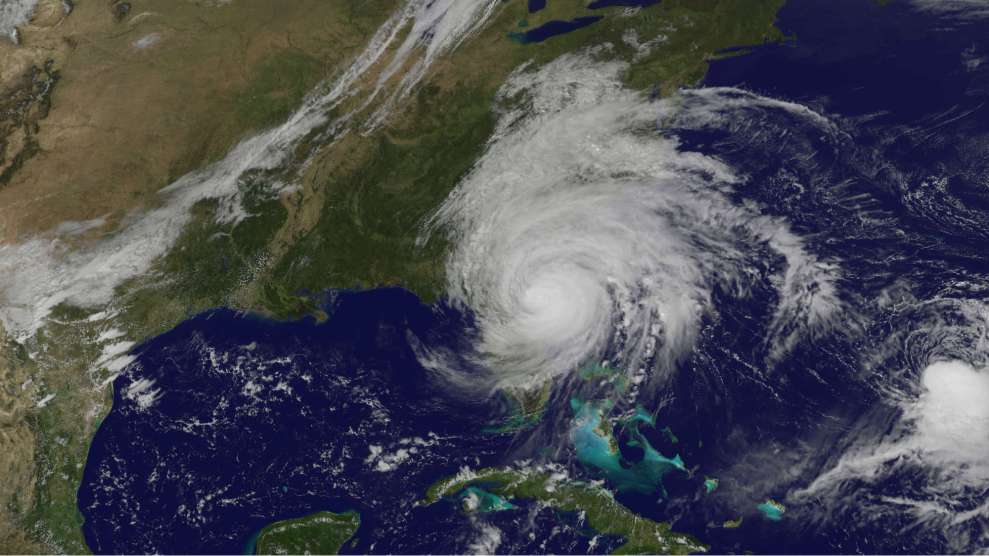 Hurricane Matthew, which is currently menacing the United States after causing more than 800 deaths in Haiti, has focused the world’s attention on the growing threat posed by flooding and extreme storms. Here’s what you need to know about how climate change could make these natural disasters even worse.

So far in 2016, there have been a total of 12 floods and severe storms in the United States that have caused more than $1 billion in losses each, according to data from the National Oceanic and Atmospheric Administration. The losses cover damage to property and infrastructure, interruptions to business operations such as store closings, and agricultural damage to crops and livestock.

Four of those catastrophic floods—two in Louisiana and one each in Texas and West Virginia—have occurred inland as a result of heavy rain. That’s double the previous record, which dates back to 1980. The pattern is clear: “Since 1991, the amount of rain falling in very heavy precipitation events has been significantly above average,” according to the National Climate Assessment, released in 2014.

Why the increase? As explained in the assessment, warmer temperatures enable the air to hold more water vapor. This extra vapor is then ready to be picked up and unleashed by the next storm system. 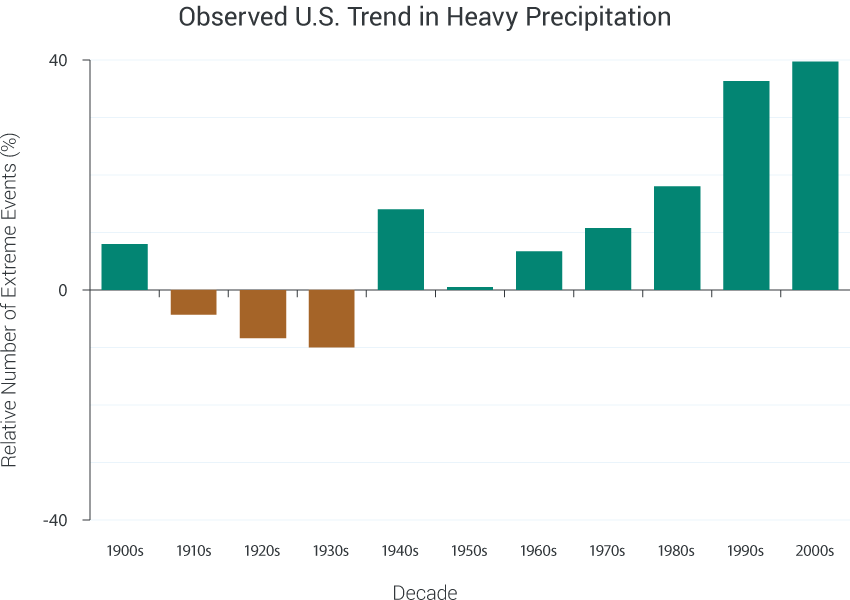 As the Environmental Protection Agency states, however, the trend is by no means a universal one. As some parts of the country—such as the Midwest, Northeast, and Great Plains—see increased flooding, other regions, like the Southwest, have seen a decrease.

Sea levels are rising, and coasts are threatened

Global sea levels have risen 8 inches since 1880, according to a Climate Central analysis, and the trend shows no signs of slowing down. The culprit? Human activity. Climate Central’s report shows that along the coasts, two-thirds of flood days are now caused by human impact.

In addition to flooding from heavy rainfall, rising seas caused by melting ice sheets and warming water (which takes up more space than cooler water) are already causing coastal flooding in places such as Norfolk, Virginia—even on days without rain, as the New York Times explains. This type of flooding, termed “sunny-day flooding,” can happen at high tide and when winds are strong enough to cause the water to flow onto streets, the Times notes. 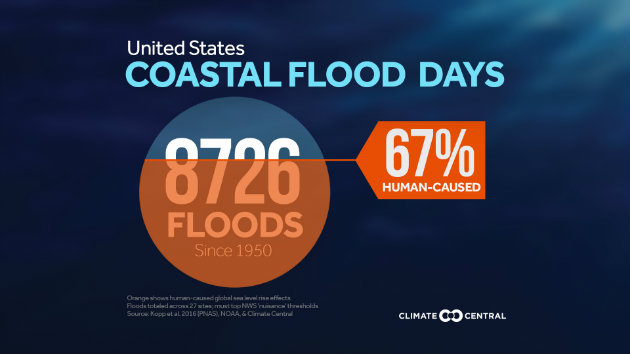 Hurricanes could get worse

Climate models cited by the National Climate Assessment also predict an increase in the number of powerful category 4 (wind speeds above 130 miles per hour) and category 5 hurricanes (wind speeds above 155 miles per hour) by late this century. Hurricane Katrina, which devastated the Gulf Coast in 2005, was upgraded to a category 5 at its most dangerous peak before striking Louisiana as a category 3 storm. It displaced more than 400,000 people, with some estimates topping 1 million. More than a decade later, the exact number of people killed by the storm is still unknown.

Matthew made landfall in Haiti as a category 4 but has been reduced to a category 3 as it pummels Florida. (UPDATE: Matthew has now been downgraded to a category 2 storm.) Yesterday, President Barack Obama declared states of emergency in Florida, Georgia, and South Carolina, and Florida’s governor, Rick Scott, warned, “This storm will kill you.” Matthew spent more time as a category 4 or 5 storm than any other hurricane on record in the eastern Caribbean, said Adam Smith, a scientist at NOAA.

The warmer surface temperature of the water in the Caribbean Sea has contributed to Matthew’s “resilience and power,” Smith added in an email to Mother Jones.

Storm surge, or the water pushed onto land by high winds, has been another contributing factor to Matthew’s danger. It reached a peak of four feet near Cape Canaveral, Florida, and is predicted to reach as much as six to nine feet in parts of Florida and South Carolina if the surge coincides with high tide.

And the threat could grow. A study released in 2013 showed that warming temperatures could cause a tenfold increase in extreme storm surges in the next few decades.

“Climate change makes worse many of our weather extremes than they would have been naturally,” Smith said.